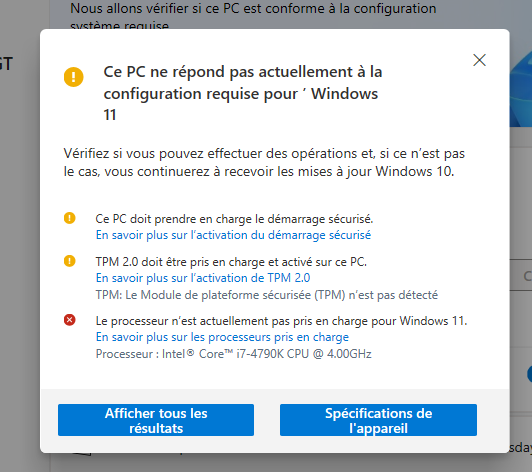 Updates will be disabled on unsupported computers.

There are only a few days left until the official release of the brand new operating system from Microsoft. While some people have already got their hands on early versions of the operating system, others are waiting patiently for the official release scheduled for October 5th. However, a large number of people are likely to be disappointed, because while Windows 10 has been particularly lenient in terms of the hardware it was installed on, Windows 11 on the other hand is more restrictive.

Windows released the toolcomputer health checkWhich allows those who want to check if their PC is compatible with the new operating system. To their surprise, many internet users were denied access to the update due to the incompatibility.

Windows 11 does not support some processors.

Obviously, tutorials quickly appeared on the web to bypass Microsoft’s restrictions and still install Windows 11 on your device. Among these, we find for example Create a boot disk with an ISO file for Windows 11 which allows bypassing the limitations of the update utility included in Windows 10.

If Windows does not block these solutions, it is highly recommended that you do not use them. the site the edge It also indicates that users who try to install the operating system anyway will encounter warning messages and a large number of restrictions. Windows notifies users that the computer is not compatible”It is no longer supported and is no longer eligible for updates».

If you decide to ignore these warnings, you will no longer be able to take advantage of automatic updates, security updates, driver updates, or new features. In other words, you will have an outdated device, with potential vulnerabilities and increasing hardware incompatibilities, that is not very attractive. Although it is possible to update the operating system manually, it is a time-consuming and cumbersome task that will deter the majority of users in the long run.

So, for now, it is better to stay on Windows 10 if your device is not compatible with the new OS. If some new features such as compatibility with Android apps or the new interface seem interesting, they do not justify giving up updates on their devices. Windows has also indicated that it will continue to update Windows 10, at least until 2025.