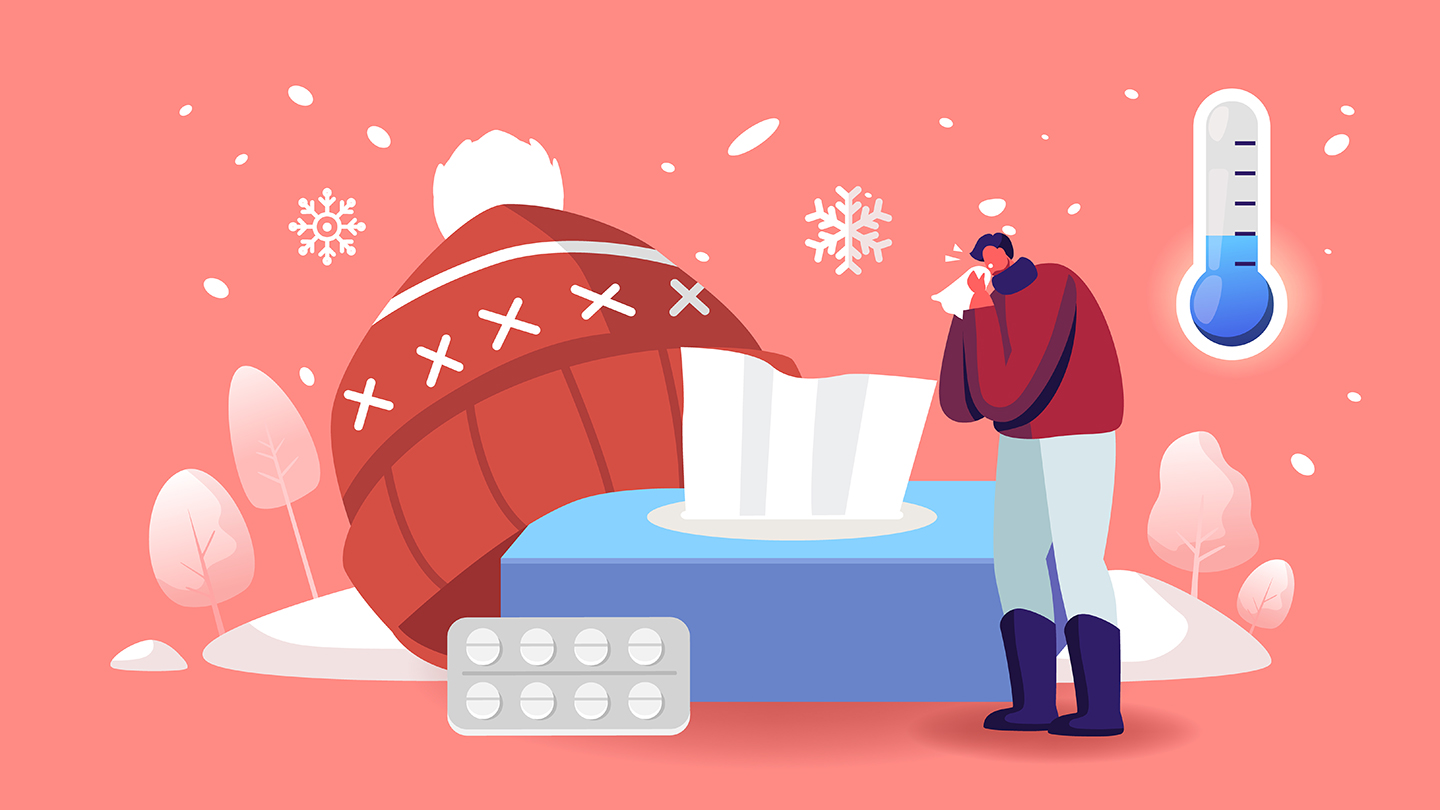 When bitter winds blew and temperatures dropped, my grandmother would urge me to come inside. “You’ll catch your death of cold out there,” she’d say.

Sure, freezing to death is possible in frigid temperatures. But doctors and other health experts have long stressed that being cold won’t give you a cold. Still, winter is undisputedly cold-and-flu season. It’s also a period when COVID-19 spreads more.

But if the chill doesn’t matter, why does the spread of so many respiratory viruses peak during the season?

Science News headlines, in your inbox

Headlines and summaries of the latest Science News articles, delivered to your email inbox every Thursday.

Thank you for signing up!

There was a problem signing you up.

“I’ve spent the past 13 years looking into this question,” says Linsey Marr, a civil and environmental engineer at Virginia Tech in Blacksburg who studies viruses in the air. “The deeper we go, the more I realize we don’t know [and] the more there is to figure out.”

She and I are not alone. “That wintertime seasonality has puzzled people for a very long time; thousands of years, to be honest,” says Jeffrey Shaman, an infectious diseases researcher who directs the Climate and Health Program at the Columbia University Mailman School of Public Health.

There is some evidence that winter’s shorter days may make people more susceptible to infection, he says. Less sunlight means people make less vitamin D, which is required for some immune responses. But that’s just one piece of the puzzle.

Scientists are also looking at what other factors may play a role in making winter a sickening season.

Illness may spread more inside.

My grandma’s well-intentioned urging to come in from the cold may have instead increased the risk that I’d get sick.

Colds, influenza and respiratory syncytial virus, or RSV, are all illnesses that are more prevalent at certain times of year when people spend more time inside. That includes winter in temperate climates, where there are distinct seasons, and rainy seasons in tropical zones. COVID-19 also spreads more indoors than outside (SN: 6/18/20).

Those diseases are caused by viruses that are transmitted primarily through breathing in small droplets known as aerosols. That’s a change in thinking. Many scientists thought until very recently that such viruses were spread mainly by touching contaminated surfaces (SN: 12/16/21).

“When you’re outdoors, you’re in the ultimate well-ventilated space,” says David Fisman, an epidemiologist at the University of Toronto Dalla Lana School of Public Health. Viruses exhaled outside are diluted quickly with clean air.

But inside, aerosols and the viruses they contain can build up. “When you’re in a poorly ventilated space, the air you breathe in is often air that other people have breathed out,” he says.

Since viruses come along with that exhaled breath, “it makes a lot of sense that proximity to individuals who might be contagious would facilitate transmission,” Shaman says.

But there is more to the story, says Benjamin Bleier, a specialist for sinus and nasal disorders at Harvard Medical School.

“In modern society, we’re indoors all year round,” he says.

To drive the seasonal pattern we see year after year, something else must be going on too to make people more susceptible to infection and increase the amount of virus circulating, he says.

Drier air can give some viruses a boost.

Some viruses thrive in winter. But the reason why may not be so much about temperature, but humidity.

“There are some viruses that like it warm and wet, and some viruses like it dry and cold,” says Donald Milton, an aerobiologist at the University of Maryland School of Public Health in College Park. For instance, rhinoviruses — one of the many types of viruses that cause colds — survive better when it is humid. Cases of rhinovirus infection typically peak in early fall, he says.

Marr and other researchers have found that viruses that surge in the winter, including influenza viruses and SARS-CoV-2 — the coronavirus that causes COVID-19 — survive best when the relative humidity in the air falls below about 40 percent.

Viruses aren’t usually floating around naked, Marr says. They are encased in droplets of fluid, such as saliva. Those droplets also have bits of mucus, proteins, salt and other substances in them. Those other components may determine if the virus survives drying.

When the humidity is higher, droplets dry slowly. Such slow drying kills viruses such as influenza A and SARS-CoV-2, Marr and colleagues reported July 27 in a preprint at bioRxiv.org. During slow drying, salt and other things that may harm the virus become more concentrated, although researchers still don’t fully understand what’s happening at the molecular scale to inactivate the virus.

But flash drying in parched air preserves those viruses. “If the air is very dry, the water quickly evaporates. Everything is dried down, and it’s almost like things are frozen in place,” Marr says.

Dryer, smaller aerosols are also more buoyant and may hang in the air longer, increasing the chance that someone will breathe them in, Fisman says.

What’s more, dry air can tear down some of people’s defenses against viruses. Studies in animals suggest that dry air can trigger death of some cells lining the airways. That could leave cracks where viruses can invade.

Mucus in the airways can trap viruses and help protect against infection. But breathing cold, dry air can also slow the system that usually moves mucus out of the body. That may give viruses time to break out of the mucus trap and invade cells, Fisman says.

Cold may harm our ability to fight off viruses.

Being cold may not give you a cold, but it could make you more susceptible to catching one.

Normally, the immune system has a trick for warding off viruses, Bleier and colleagues recently discovered. Cells in the nose and elsewhere in the body are studded with surface proteins that can detect viruses. When one of these sensor proteins sees a virus coming, it signals the cell to release tiny bubbles called extracellular vesicles.

The bubbles work as a diversionary tactic, a bit like chaff being released from a military jet trying to avoid a heat-seeking missile, Bleier says. Viruses may go after the vesicles instead of infecting cells.

If a virus docks with one of the bubbles, it’s in for a surprise: Inside the vesicles are virus-killing bits of RNA called microRNAs. One of those microRNAs known as miR-17 could kill two types of rhinoviruses and a cold-causing coronavirus, the team reported December 6 in the Journal of Allergy and Clinical Immunology.

Researchers measured bubbles released from human nasal cells grown in lab dishes at 37° Celsius, our typical body temperature. Then the scientists lowered the thermostat to 32° C.  Cells released about 42 percent fewer vesicles at the cooler temperature, the team found. What’s more, those vesicles carried fewer weapons. Vesicles can pack in about 24 percent more microRNA at body temperature than when it is cooler.

I asked the experts what people can do to protect themselves from viruses in the winter. Some said using a humidifier might help raise moisture levels enough to slow the drying of virus-laden droplets, killing the viruses.

“Any increase in humidity should be beneficial,” says Shaman. “You get a lot of bang for your buck if you go from very dry to dry.”

But Milton doesn’t think it’s a good idea to pump a lot of moisture into a house when it is cold outside. “That humidity is going to find all of the cold spaces in your house and condense there,” creating a breeding ground for mold and rot, he says.

Instead, he advocates turning on kitchen and bathroom exhaust fans to increase ventilation and to use HEPA filters or Corsi-Rosenthal boxes to filter unwanted viruses out of the air (SN: 7/25/22).

Bleier suggests wearing a mask. Not only can masks filter out viruses, but “our work suggests these masks have a second mechanism of action,” he says. “They keep a cushion of warm [moist] air in front of our noses, which could help bolster the immune system.”