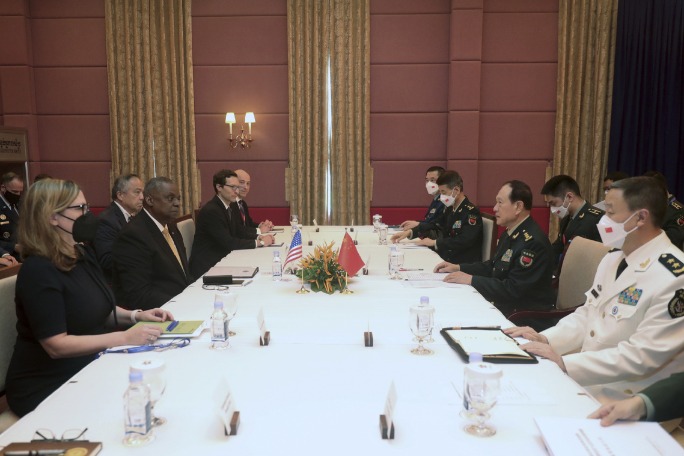 During his talks with his US counterpart on Tuesday on the sidelines of a regional meeting in Cambodia, Chinese State Councilor and Defense Minister Wei Fenghe, reiterated that the United States should respect China’s core interests and never cross its redline on the Taiwan question.

Although the meeting between President Xi Jinping and US President Joe Biden on Nov 14 prevented bilateral ties from going into free fall, the next day the US-China Economic and Security Review Commission released its 2022 annual report, in which the bipartisan congressional committee upheld its consistently tough stance on China. On the Taiwan question, the report criticized the Chinese mainland’s Taiwan policy and tried to push the US Congress to enact a new bill to contain China. The report claimed that Beijing engaged in military intimidation, economic coercion and political isolation of Taiwan. It pays no heed to the US’ actions intended to hollow out the one-China policy the US administration claims to abide by.

The commission made three recommendations in its report. It called for a permanent inter-agency committee in the federal government. In the face of the so-called hostile actions against Taiwan by the Chinese mainland, the committee would be responsible for formulating and implementing sanctions and other measures. It asked Congress to direct the US Department of Defense to produce a classified report exploring how to enhance Taiwan’s ability to resist an “attack” by the mainland. And it required Congress to provide a large amount of additional multiyear defense funds for US-Taiwan military cooperation.

The position of the US-China Economic Security Review Commission is quite different from the US government’s reiteration that it upholds the one-China policy. But it is normal for the US government and Congress to have differences on policy, which involve factors such as partisan struggle and electoral politics.

The US political system is set up so there are mutual checks and balances between the federal government and Congress. Due to bipartisan disputes within Congress, the foreign policy of the ruling party will be constrained to a certain extent. Although the meeting between the Chinese and US presidents in Bali sent a positive signal, it is still common for members of Congress to adhere to the Cold War mentality and their stance of seeking to suppress strategic opponents has not changed.

Since the Biden administration came to power, Congress and the executive branch have had a high degree of compatibility and close cooperation and interaction in Taiwan-related policies. So the White House’ policies could exert an influence on the US Congress’ agenda setting.

On Taiwan-related issues, the leading role of the US administration is very important. If the federal government implements the wrong strategy on the Taiwan question, it can easily lead Congress’ legislation astray. The Biden administration regards Taiwan as a “strategic asset” of the US. The Biden administration’s Taiwan policy swinging between “ambiguity” and “clearness” creates a complicated and confusing Taiwan Straits situation, thereby maximizing the interests of the US. While the Biden administration no doubt views this as a pragmatic approach, it is not only sending wrong signals to the independence-desiring Democratic Progressive Party on the island, but also sending the wrong signal to anti-China lawmakers in the US Congress. Only by setting an example to implement the one-China policy can the US government guide Congress to become more rational on Taiwan-related issues.

In addition to correct guidance, the White House and the US State Department can exert influence on Congress to correct congressional misstatements in Taiwan-related proposals so that the relevant proposals conform to the one-China principle. The Taiwan question concerns the political foundation of Sino-US relations and is an unshakeable redline. For partisan interests and election needs, Congress sometimes proposes more radical Taiwan-related bills. If the White House and the State Department challenge the bill, it puts pressure on the bill’s sponsors to amend or drop certain elements. In order to maintain the overall situation of Sino-US relations, the president can even refuse to sign relevant bills.

The federal government has the obligation and the ability to exert influence on Congress so that it will not deviate from the one-China line. The US Congress hopes to pass legislation to strengthen substantive exchanges and cooperation between the United States and Taiwan. That will not bring security to Taiwan. Challenging China’s redline will only trigger conflict across the Taiwan Straits and bring disaster to Taiwan. The Biden administration needs to take active measures to guide Congress to look at the Taiwan question objectively, and prevent it from taking radical actions. Peace and stability in the Taiwan Straits and the healthy development of Sino-US relations are conducive to US interests.

The author is an associate researcher at the Institute of American Studies, Chinese Academy of Social Sciences.

The opinions expressed here are those of the writer and do not necessarily represent the views of China Daily and China Daily website.