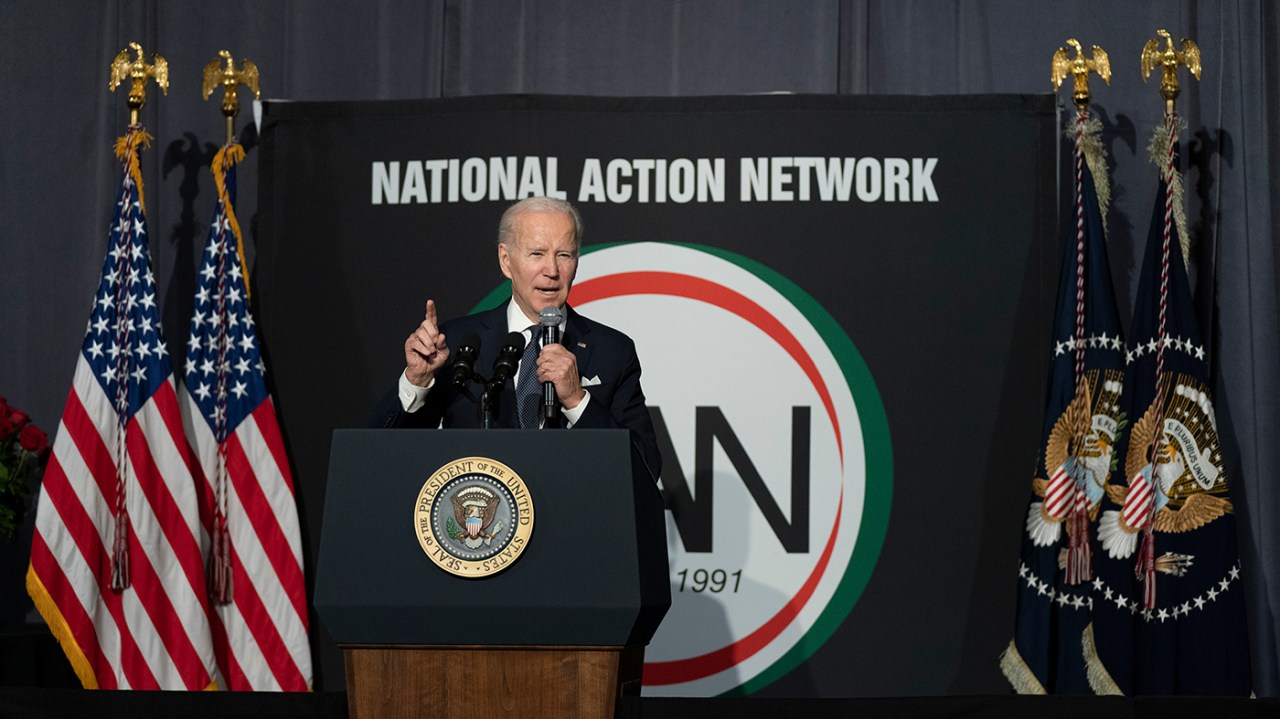 Racial justice was at the forefront of President Biden’s agenda when he took office. Yet despite signing an executive order on advancing racial equity, critics say he’s made little progress since his election, including on voting rights and police reform, two major concerns for Black voters. He now faces a GOP House that is set to take a radically different position on such issues.

Still, the Biden Administration has seen some success in passing parts of its racial justice agenda.

Here’s where key aspects of the agenda stand:

One of Biden’s major campaign pledges was to “strengthen America’s commitment to justice and reform our criminal justice system.” Part of that included reducing the number of incarcerated people.

Since 2021, Biden has pardoned only nine individuals for crimes ranging from possession with intent to distribute crack cocaine to second degree murder while armed.

But in October, he took another step forward by pardoning everyone convicted of simple possession of marijuana under federal law.

But the pardons didn’t release anyone from jail — there is no one in federal custody for simple possession of marijuana.

Still, for those who had a felony conviction, the pardon will restore civil rights, like voting, that had been stripped away. And while the pardon doesn’t erase the convictions from anyone’s record, it will make it easier for those convicted to apply for a job or try to rent an apartment.

But other key aspects of Biden’s criminal justice reform agenda have not passed: Marijuana remains illegal at the federal level and cash bail remains the standard for most states, though some have begun debating ending it.

Biden has also not established his promised Task Force on Prosecutorial Discretion. The task force would look at how decisions are made on when to charge someone and with what crimes, both of which vary widely across jurisdictions. Because of this, some individuals end up with longer sentences, parole or probation, while others might be forced into taking a plea deal.

Black voters have consistently identified racism as one of the top concerns they want to see addressed. Part of that includes having white supremacy declared a national security threat.

While this has not happened yet, Biden’s Jan. 20, 2021, executive order instructed the Department of Homeland Security to address white supremacists and other domestic terrorists.

The goal was to improve the federal government’s understanding of white supremacy, prevent groups from being mobilized and counter the use of the internet in recruiting domestic terrorists.

In a report soon after, the DHS identified white supremacists as the biggest terror threat to the United States.

“White supremacists will not have the last word and this venom and violence cannot be the story of our time,” Biden said at the United We Stand summit last September.

But white supremacist-perpetuated violence has persisted.

A white supremacist gunman attacked a supermarket in a predominantly Black area of Buffalo, New York, killing 10, in May last year. In June, 31 people affiliated with the white nationalist group Patriot Front were caught on their way to a Pride parade in Iowa.

Misinformation about the COVID-19 pandemic led to a rise in hate crimes against Asian American and Pacific Islander (AAPI) communities. Attacks have been perpetuated against adults, students and AAPI businesses, according to Stop AAPI Hate.

Biden took steps to address the increase in hate crimes against Asian Americans in May 2021 when he signed the COVID-19 Hate Crimes Bill into law. The law aims to make reporting hate crimes at the local and state levels easier.

It also directs the Department of Justice to appoint a designated officer to expedite the review of hate crimes related to COVID-19. It would authorize grants to state and local governments to create programs for preventing and responding to hate crimes.

“We heard how too many Asian Americans have been waking up each morning this past year genuinely — genuinely — fearing for their safety just opening the door and walking down the street, and safety for their loved ones,” Biden said at the signing. “The moms and dads who, when they let their kids out the door to go to school, were worried.”

“For centuries, Asian Americans, Native Hawaiians, Pacific Islanders — diverse and vibrant communities — have helped build this nation only to be often stepped over, forgotten or ignored. You know, lived here for generations, but still considered, by some, the ‘other’ — the ‘other.’  It’s wrong.  It’s simply — to use the phrase — it’s simply un-American.”

The COVID-19 pandemic highlighted the impact of the racial wealth gap. During the pandemic, Black families were more likely than white families to face financial hardships and to have less access to resources, according to The Center for American Progress.

So, on the 100th anniversary of the Tulsa race massacre, an incident in which a thriving Black business community was destroyed as a mob of white people killed hundreds, Biden announced his administration would take action to address racial discrimination in the housing market, a huge win for Black communities that have faced widespread discrimination in housing appraisals.

According to a report by The New York Times, homes in majority white neighborhoods are appraised for $371,000 more than those in neighborhoods where the majority of residents are people of color — a 75 percent increase since 2013.

Meanwhile, Biden’s decision to forgive up to $20,000 in student loans was also a major step toward erasing the racial wealth gap.

About 24 percent of Black adults have federal student loan debt, compared to only 14 percent of white adults, according to CNBC + Acorn’s Invest in You Student Loan Survey.

On average, Black college graduates owe $7,400 more than their white peers when they graduate, according to the Brookings Institution. Four years after graduation, Black borrowers owe an average of $52,726, compared to $28,006 for white college graduates.