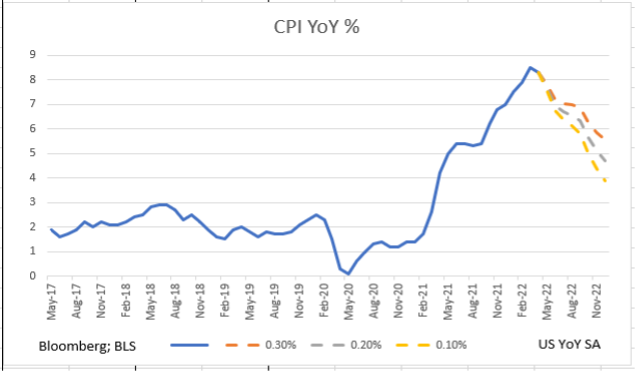 It was another volatile week in the financial markets. While there were up days, like Friday (May 13), the trend continues to be down. The table shows the weekly movements in the major indexes and the downdrafts from their nearby peaks. Note that the Nasdaq and Russell 2000 are deep in “Bear Market” territory (down more than 20% from their peaks) and that both the S&P 500 and the DJIA are in “Correction” (down more than 10%).

Blame it On the Fed! We are now likely to see major up days in the markets when the economic news is ugly. On Friday, the ugly data was the University of Michigan’s Consumer Sentiment Index (see chart below), now sitting near the lows of the 2008 Great Recession. One would think that markets should fall when the data is ugly. But today, bad economic news implies that the recession is closing in, and that means the Fed will not be able to execute its publicly announced interest rate plans (i.e., its “Forward Guidance”).

Because of the Fed’s poor track record in guiding the economy to a “soft landing” once it starts a rate-hiking cycle (three soft landings in 14 tightening cycles, i.e., 11 recessions), the worse the incoming data, the more likely it will be that the Fed modifies the level of its “terminal” interest rate.

Along these lines, on Thursday, Powell was finally “confirmed” by the Senate as Fed Chair. And what do you know – he began to play it straight with the American public, saying that he thought that the process of crushing inflation would “include some pain”! This is the first indication of what we think will be his changing view of the economy as the year progresses.

It is constantly in the headlines, on news broadcasts, and generally the go-to topic of the media – inflation! The media is fixated on it, especially the Y/Y change in the Consumer Price Index (CPI). The data came out on Wednesday (May 11), and we saw what we expected, that April’s inflation on a Y/Y basis had declined from its 8.5% level in March. But because it only fell to 8.3% when Wall Street expected 8.1%, the “inflation narrative” was reinforced and lives on.

There wasn’t any mention that we could find of the rapid fall in the monthly change in the CPI (see chart above “CPI MOM %”). Note that the M/M inflation rate fell from a 1.2 pct. point change in March to a 0.3 pct. point change in April. Note, too, that we haven’t seen that small of a monthly change since last August, and before that, December 2020. Here is a “thought experiment.” What would the Y/Y change in the CPI be in December 2022 if the change in the CPI were to stay steady at 0.3 pct. points per month? The chart at the top of this blog shows that number (the highest dotted line; 5.5%)) and what the rate of inflation would be at 0.2 pct. points per month (4.7%) and 0.1 pct. points (3.9%). If we do some surgery and strip out food, airline and new car prices, April’s CPI was flat; and if rents are excluded, it was down -0.1%. While this is little comfort to household budgets, we are seeing the first positive signs that inflation is beginning to wane.

It is a similar story for the Producer Price Index (PPI), an index of the cost of business inputs. While up 0.5% in April, like the CPI, we haven’t seen prices rise this slowly since last September, and before that, December 2020.

So, despite the media rants and the ongoing “inflation” narrative, both CPI and PPI were “tame” relative to those of the recent past and they were in keeping with the view that we expressed in past blogs that the inflation numbers would be falling as the year progressed. Referring to the chart at the top of this blog, at a minimum, we expect the upper of the three dashed lines on the chart (December Y/Y inflation at 5.5%) but wouldn’t be at all surprised if we saw the lower one (December Y/Y inflation at 3.9%).

The incoming data continue to bolster our view of a weakening economy. In past blogs we’ve noted that real (inflation adjusted) weekly take home pay is negative on a Y/Y basis (-4%). The chart above, from Blackrock, shows that U.S. labor costs have been falling. So, it isn’t any wonder that corporate profits reached another all-time high.

Some commentators have expressed the view that businesses have been price “gouging,” i.e., raising prices faster than costs. After all, if “inflation” is on everyone’s mind, then price increases are “expected.” We don’t think many of those prices will stick once consumers cut back. The “narrative” on Wall Street is that consumers won’t cut back because Uncle Sam sent free money for the last couple of years and that money is available to buoy consumption.

Well, it was – but no longer! The savings rate has now plunged below its pre-pandemic level to 6.6% so all that “free money” looks to have been spent. And then, in March and April, consumption was bolstered by record breaking increases in consumer credit (read: credit card debt) (see chart above). That can’t continue as credit limits are approached.

In addition, an oft used source of consumer funding, especially for big ticket items, has been home refinance. This was especially true as home prices rose while the Fed held down interest rates. But, with the rise in rates, that source, too has disappeared (see chart). There doesn’t appear to be many other places where consumers can easily access credit. Thus, we believe a significant slowdown in consumption will soon show up in the data.

Last week, we talked about how markets misinterpreted the employment report, completely ignoring the Household Survey (-353K), relying instead on a Payroll Survey (+428K) that added +160K for small businesses (Birth-Death model) when all the surveys say that small businesses are cutting back and the largest payroll purveyor in America, ADP, counted -120K fewer employees in their small business sector.

This week, the “narrative” emphasized “inflation,” despite both CPI and PPI March looks to have been the peak and that, going forward, just a repeat of April for the remainder of the year will significantly reduce that malady.

The real driving force in the financial markets is the Fed. Markets rise and fall based on what they think the Fed might do next. That’s why “bad” news on the economy is “good” news for markets, because “bad” economic news means the Fed won’t fulfill its “Forward Guidance” tightening program.

(Joshua Barone contributed to this blog.)