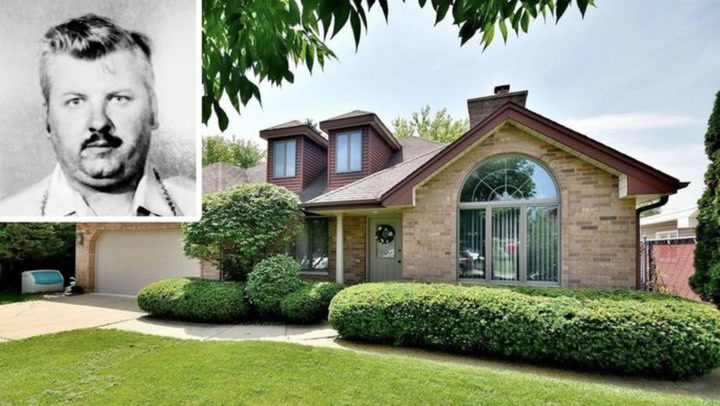 In the 1970s, boys and young men were disappearing around Chicago. No one suspected that a suburban contractor who moonlighted as a clown at neighborhood parties was secretly luring dozens of men into his home, torturing them, and then burying their bodies on his property.

Serial killer John Wayne Gacy is back in the spotlight with the debut this week of a three-part series on Netflix, “Conversations with a Killer: The John Wayne Gacy Tapes.” The new show explores audio between Gacy and his defense team that previously hadn’t been publicized.

The crimes terrified the nation when 26 bodies of his victims were discovered in the crawl spaces underneath the killer’s modest ranch home in the Chicago suburb of Norwood Park. Three more were found elsewhere on the property, and four were uncovered in the Des Plaines River.

So what ever happened to Gacy’s infamous house of horrors where at least 33 men were raped, tortured, and murdered?

In 1979, the ranch home was razed and a three-bedroom, two-bathroom brick home was erected on the property in 1986. (In 1994, Gacy died by lethal injection.)

Over the decades, that 2,500-square-foot home changed hands several times, selling most recently to one of the owners of a local plumbing company and his wife. The home, which boasts vaulted ceilings, a two-sided fireplace, and a skylight, was sold in March of last year for $395,000, according to property records.

“The stigma runs with the land, not the house,” says real estate appraiser Orell Anderson, president of Strategic Property Analytics in Laguna Beach, CA. “When these houses come up for sale, some people buy the place thinking if they tear it down and change the address a little bit and do some cosmetic fixes, the stigma will go away.” But it typically doesn’t.

The sale came after nearly two years of the home being on the market and at least 10 price cuts, as many buyers were unable to overcome the stigma of buying a home where grisly crimes occurred. The home was listed for $489,000 in August 2019.

The price cuts are often necessary because buyers “have to have an incentive [to live] in a place where a horrific event occurred,” says Anderson. The more horrific a crime, the deeper the cuts can be.

The most famous of homes can attract looky-loos for decades. This can be an annoyance for homeowners dealing with folks stopping and taking photos of the property or even ringing the doorbell.

The new owners weren’t aware of the property’s grisly history “until recently,” the brother of the buyer told Crain’s Chicago Business. The owner of the home declined to comment when reached by Realtor.com®.

Gacy, who had previously served time for sexually assaulting young men, was arrested in 1978. The property was vacant until it was purchased in 1984 by Hoyne Savings & Loan at a sheriff’s sale, according to Crain’s. The savings and loan company paid off $30,544 in taxes on two mortgages to acquire the lot.

Four years later, a woman reportedly bought the property and put up a new home there for her aging parents to live in, according to TMZ. This new home had a different address.

In 2004, the home was sold for $300,000 to what appears to be a financial institution, according to property records. The home didn’t go up for sale again for 15 more years. Even once it was listed in 2019, it took nearly two years and a more than 19% discount before it sold in the throes of the COVID-19 pandemic, during an epic housing shortage amid record-high home prices.

Says Anderson of the property: “You’ve got bad juju there associated with that specific geographic location.”