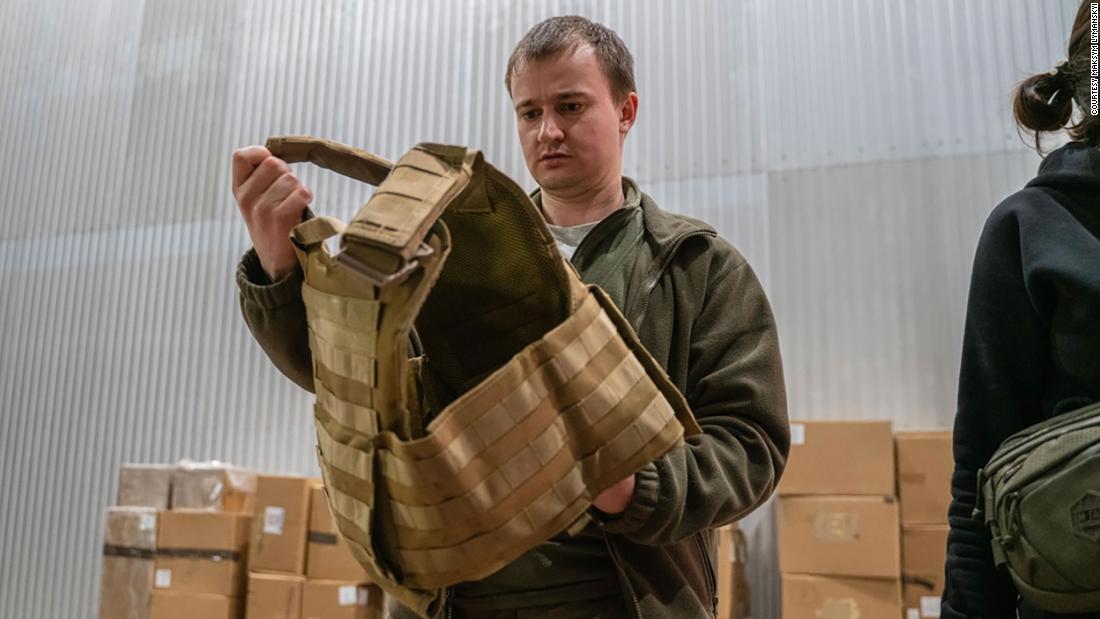 Among the agencies contacted by CNN, and the non-government groups gathering supplies, none have said they’re collecting weapons or ammunition.

Many of the police departments involved in these efforts are working with charity organizations and former members of the US military. Some sources with direct knowledge of the varied efforts — but who are not involved — spoke to CNN on the condition of anonymity due to concerns about potential legal questions the effort could raise.

It’s unprecedented, experts say, for US law enforcement agencies to donate police protective equipment and military-grade gear to a foreign country involved in an ongoing war. The effort also raises questions about the roles of police departments and whether, as domestic law enforcement agencies, they should send equipment to a foreign conflict outside of their jurisdiction.

Because there’s no central coordinating group, there’s not an easy way to say what’s being shipped or whether it’s subject to export regulations.

The Ukrainian American Coordinating Council (UACC), a non-profit organization, is at the center of one effort to send regulated, military-grade and police protective items to Ukraine, including ballistic helmets, hard plates, soft armor inserts and vests, the group says.

When Russia’s invasion of Ukraine began, the UACC moved quickly to obtain a license from the Department of Commerce to export level III ballistic vests and helmets, as well as a special authorization from the State Department for level IV vests in a limited capacity, according to the organization.

Level III armor is the first level of body armor that provides protection against rifle rounds and level IV is rated by the National Institute of Justice as the highest level of ballistic protection.

In accordance with the UACC’s export license, the equipment can only be provided to Ukrainian civilians who have joined territorial defense units to defend their country against Russian troops, according to Mick Safron, an executive member of the board of UACC.

The UACC is partnering with the Ukrainian charitable organization called Come Back Alive, which helps store and distribute the equipment from Lviv warehouses to territorial defenses and “hotspots” across the country, according to the UACC. The foundation has end-user certificates for every territorial defense unit that receives vest and helmet donations, according to Safron.

The UACC acknowledges where Come Back Alive is distributing the donations. However, once the shipments arrive in the country, the UACC does not have control over whether the gear is distributed to the Ukrainian army or police forces, Safron said.

The US Department of Commerce and State Department did not confirm the UACC’s claims regarding its export license and special authorization, but the State Department tells CNN that groups seeking to donate military-grade gear and other equipment may be subject to export regulations.

The department “has been processing requests for exports to authorized end-users in Ukraine rapidly,” according to the statement, which includes applications for licenses to export firearms and ammunition under its “existing processes and authorities.”

In an interview with CNN, retired US Army Maj. Gen. Mike Repass — the former commander of the US Special Operations Command in Europe — said level IV body armor is “capable of withstanding one or two shots from a Soviet-type round” and the technology is controlled by the State Department for US export.

“However, the provision of Level IV body armor is subject to a lengthy process to get US approval for delivery to Ukraine. It is late-to-need as a result,” Repass added.

Some of the gear being donated by law enforcement departments, including certain types of protective vests, do not qualify as military-grade, meaning they can be sent to Ukraine without approval from the federal government, according to US Army veteran Alex Plitsas, who has been working with several police departments across Connecticut to ship the equipment to Ukraine. A typical vest worn by a police officer, rated to stop most handgun rounds, would not qualify as military-grade.

The State Department is advising groups involved in the donations to consult with the Ukrainian government, “to confirm the items will meet an immediate requirement,” a department spokesperson told CNN. “After that, items must first be assessed to determine how they are controlled for purposes of export … prospective donors must follow necessary export licensing rules before sending.”

Organizers and police departments involved in this effort tell CNN that their work is legal, and the equipment being donated is reviewed to ensure it meets federal export regulations. But it remains unclear whether federal agencies are fully aware of every item that is being shipped to Ukraine as the US government largely puts the onus on donors to ensure they are following the law.

CNN spoke with several experts about the legality of various efforts to aid Ukraine by sending protective gear and raised the central question of whether the federal government should be authorizing local police departments to intervene in international affairs.

“The answer is, probably not,” said Martin L. Cook, a professor of professional military ethics who taught at US war colleges.

“What gives them the authority to do that? The short answer is nothing,” Cook added. “But do we have a mechanism? I don’t think we do — to say before a local police department can do such a thing, they have to clear with DOD or state.”

According to Valerie Morkevičius, an associate professor of political science at Colgate University, there might be “really strong and valid ethical reasons for wanting to engage in this type of support.”

Morkevičius emphasized that, generally, people might be more sympathetic to Ukraine due to the circumstances of the war, and their sympathy “might not be misplaced.”

“But we have to think about the broader implications that follow from all this,” she added. “If we want to say it’s OK this time, what are the guideposts we might be shifting for future actions?”

When Russia began its military invasion of Ukraine in late February, Pennsylvania police officer Dean Stecklair of Falls Township was approached by his mother-in-law for help.

Stecklair’s wife, who is Ukranian-Lithuanian, had family members stuck in the country and shared stories of civilians who were taking up arms to defend themselves against Russian attacks. She expressed the need for defensive equipment. His mother-in-law asked if the Falls Township police department had any tactical gear such as protective vests and helmets that were not being used to send overseas to Ukraine, he told CNN.

Since then, the agency — located in Bucks County, which houses a large Ukranian population — has collected and donated more than 100 ballistic vests and dozens of helmets as part of its “Operation Urgent Aid” effort and has collaborated with departments in nearby counties to set up drop-off points for donations to send to Ukraine.
It’s just one of the many ways that US law enforcement agencies across the country are joining the loosely organized effort at the local and state level. Police departments in Colorado, Connecticut, Vermont, California, New York and Pennsylvania have all announced initiatives to procure and donate protective equipment.

State and police agencies are working with Ukrainian-American groups in the United States and the Ukrainian government, according to Plitsas, the US Army veteran. US agencies, including the State Department, are aware of the ongoing effort involving police departments, he added.

“I believe that we have tapped into something larger than just our desire to help as police officers,” Falls Township Police Chief Nelson Whitney told CNN.

“The community, regular citizens of the United States, have come out in large numbers to donate supplies,” Whitney said. ”This desire to help innocent people who are being killed and injured by an aggressive totalitarian leader like Vladimir Putin is rooted deeply within the American spirit. How could we not help?”

In California, the state’s Office of Emergency Services (OES) is working with the National Guard to coordinate donations from state and local law enforcement agencies for “excess/re-sourced ballistic helmets, vests and gloves, as well as safety goggles to provide to Ukrainian citizens in and around the war zone,” according to Brian Ferguson, a spokesperson for California OES.

California OES and National Guard have been in “regular communication” with the Ukrainian consular affairs staff on potential humanitarian support, Ferguson said.

The Fairfield Police Department and other agencies in Connecticut, such as Greenwich and Westport, have also collaborated in a joint effort to donate more than 200 previously used ballistic vests and helmets to assist Ukrainian soldiers, the department has announced.

In a letter to the Fairfield Police Department, the Consul General of Ukraine located in Houston specified that “body armor, helmets and other personal protective equipment” was needed for military, police forces, and more than 100,000 civilians that joined “Territorial Defense Forces” since war broke out. That department is among the agencies engaged in this effort.

Colorado’s state government set five locations for police agencies to drop off excess equipment, including in Denver and Colorado Springs. More than 1,000 helmets and 840 sets of body armor were gathered this way from 25 different police agencies.

Police officials in Colorado are increasingly taking interest in helping Ukrainian civilians as an opportunity to “save lives, even if it’s not within our own border,” according to Stan Hilkey, executive director of the Colorado Department of Public Safety, which launched an effort with the state’s Department of Military and Veterans Affairs to collect equipment.

Four shipments of equipment have arrived in Ukraine

The first shipment of US protective equipment arrived in a Kyiv warehouse on March 23, according to Safron of UACC. It included thousands of hard body armor plates and vests, he said.

Four shipments in total have been delivered to end-points in Ukraine as of this week, Safron said. Two additional shipments that include thousands of vests and helmets — weighing 45,000 pounds in total — are currently being prepared to be exported by early next week.

The UACC is shipping gear to Warsaw, Poland — where some 2.5 million Ukrainian refugees have arrived since the war began — in bulk quantities in partnership with international shipping company Meest.

Similarly, the UACC relies on Ukranian-American human rights group Razom as a social media partner to spread the word about the effort. “Meest” means bridge and “Razom” is translated as “together” in Ukrainian.

Part of the third shipment of equipment arrived at one of the Come Back Alive foundation warehouses on Friday, according to Safron. It included 852 pieces of military-grade body armor, as well as 296 helmets, the organization confirmed on Facebook.

Oksana Tscherepenko, a Ukrainian-American citizen who is the vice president of UACC, told CNN that the organization is receiving an overwhelming number of phone calls from police officials and other individuals who want to contribute humanitarian aid and protective gear.

The UACC is also partnering with organizations to set up fundraisers that have received hundreds of thousands of dollars in donations, the organization told CNN.

“The more lives we save the more chance that we have to stay free and to continue our fight in Ukraine for democracy,” Tscherepenko said.