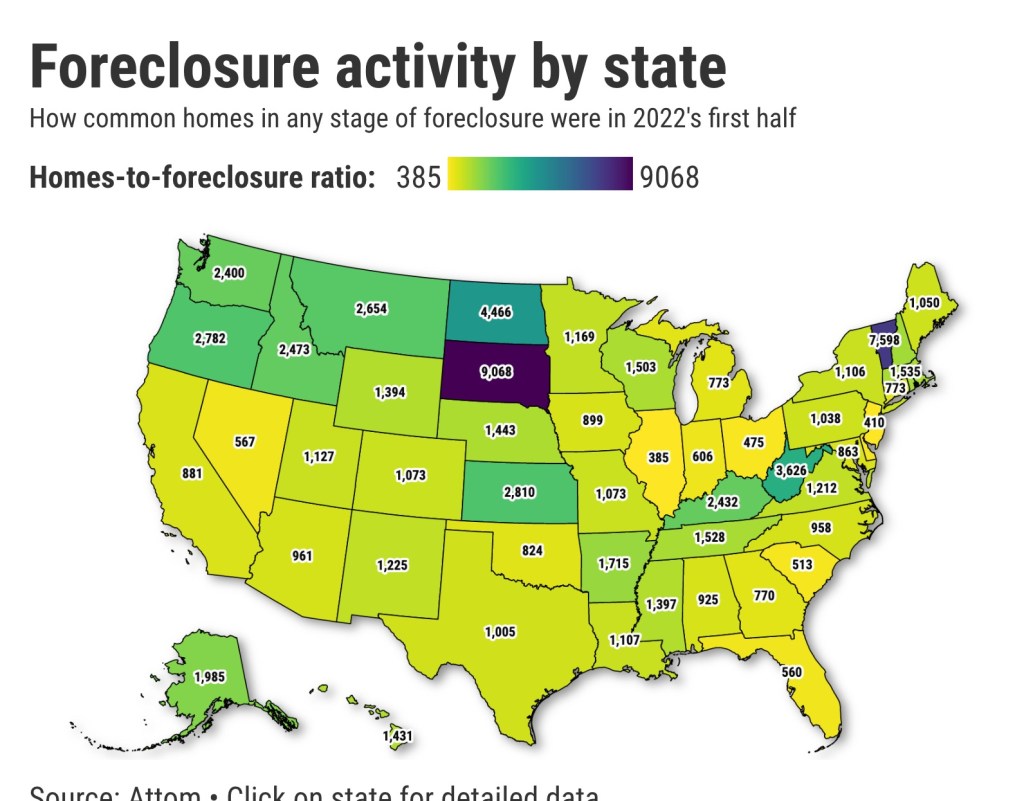 Buzz: The number of homes in foreclosure jumped 116% in a year in California as restrictions end on the ability of lenders to move against seriously delinquent borrowers. The U.S. number was even higher, surging 153%.

Debate: Are eye-catching jumps in foreclosure activity a sign of financial trouble? Or simply a return to more normal levels of borrower duress as pandemic-era homeowner protections expire?

Let’s look at that level of troubled borrowers compared with the number of all housing units.

Using this measure of frequency, California ranked 14th highest with a home in foreclosure for every 881 units statewide vs. an 854 rate nationally. Most common? There’s a troubled borrower in Illinois for every 385 residences, then New Jersey at 410, Ohio at 475, Delaware at 497, and South Carolina at 513.

Given the opportunity, after roughly two years of foreclosure moratoriums, lenders are acting. California ranked only 36th with its 116% jump in foreclosure activity vs. 2021’s first half.

“We are just seeing a jump off artificial lows because of government intervention that did its job, preventing millions of unneeded foreclosures across the country,” says ATTOM analyst Rick Sharga, who notes current foreclosure activity is 40% below what’s considered normal patterns.

Lender generosity plus government aid gave borrowers in financial distress plenty of chances to avoid losing their homes as coronavirus chilled the economy.

The robust economic rebound out of the lockdown turmoil created big jumps in home values, suggesting a huge, marketing-crashing wave of foreclosure is unlikely at this juncture. Jumps in foreclosures were expected as protections ended for tardy payers.

But ponder 2022’s first half activity vs. two years ago — early in the pandemic era — when we experienced huge economic uncertainty and the launch of government aid for troubled borrowers and foreclosure moratoriums.

Nationally, foreclosure activity is down 1% over two years. California’s foreclosures are down 9% in two years — ranked No. 28 among the states.

If you need help

The end of halts on foreclosures doesn’t mean troubled borrowers in California can’t get help.

The California Mortgage Relief Program is distributing $1 billion in federal funds to cover missed housing payments — up to $80,000 for mortgage relief and up to $20,000 for property tax relief — for households earning up to 50% more than a region’s median income. The application is free and any benefits received never have to be paid back.

The relief has been expanded to include homeowners who missed payments in the first half of 2022, with greater income eligibility and covers past-due property taxes for more homeowners.

Jonathan Lansner is business columnist for the Southern California News Group. He can be reached at jlansner@scng.com