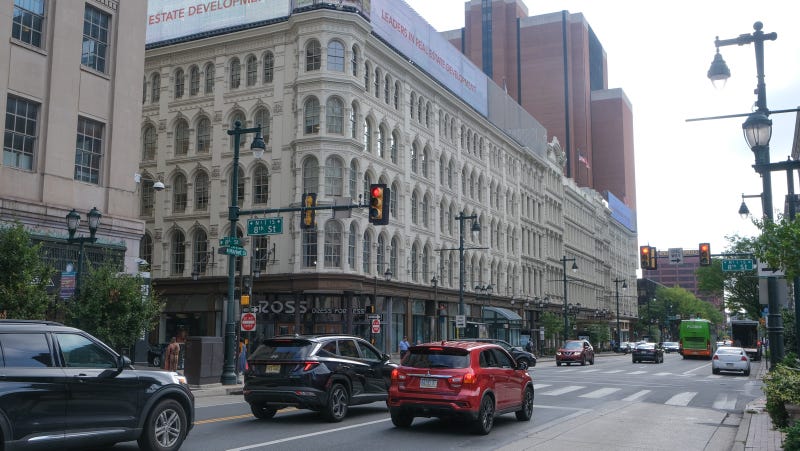 PHILADELPHIA (KYW Newsradio) — Finally. Philadelphia was going to be on the map.

After years of pitching, selling and lobbying retail and entertainment companies to bring their global brands to the city, then-Mayor Ed Rendell landed his biggest catch: the Mouse.

With Goofy standing by his side at City Hall — yes, it was an announcement that warranted fanfare — Rendell had, at long last, lured Disney to Philadelphia.

Not only was the Goofy mascot in the house on that early December day in 1998, but he was also decked out in colonial garb — a three-cornered cap and all. There were drumrolls, trumpets and one of Rendell’s signature bold proclamations: “Let me say, our DisneyQuest is going to be more attractive and prettier than even the Orlando one is!”

DisneyQuest was a chain of indoor interactive theme parks spawned in the late ’90s, which Disney execs intended to build in cities across the U.S. The first location outside the Orlando gates opened in Chicago. Philadelphia was next.

The crowd at City Hall applauded with excitement and hope that day. But less than two years later, DisneyQuest Philadelphia was dead.

DisneyQuest Chicago at least made it past opening day, but it suffered a similar fate by September 2001.

It appeared DisneyQuest Philadelphia, which Rendell was counting on to be a major driver of tourism, was not meant to be. And all he and Disney had to show for their big dreams was a big ol’ hole at the corner of Eighth and Market streets.

Now a parking lot, a plot of land that encompasses the corner of Eighth and Market streets was once proposed as the site for DisneyQuest Philadelphia.

Theme restaurants. Big-box retail. Grandiose indoor urban entertainment centers. These were catchy commercial real estate trends of the mid- to late-1990s, and Disney wanted in. Thus, a division of the company called Disney Regional Entertainment was born. DisneyQuest fell under that umbrella.

“It was an interesting mix of hands-on interactive things,” said Jim Hill, an entertainment writer who has covered The Walt Disney Company for more than 35 years.

Rides and experiences were pitched, including CyberSpace Mountain, Pirates of the Caribbean: Battle for Buccaneer Gold, and Aladdin’s Magic Carpet Ride.

“For its time, it was very sophisticated — some of the very earliest uses of virtual reality,” Hill said.

Disney was so bullish on the concept that at one point, it planned to develop 20 to 30 DisneyQuest parks around the world. The first one debuted at Walt Disney World Orlando in June 1998, followed by Chicago a year later.

DisneyQuest Philadelphia was slated for the summer of 2000, just in time for another boost in tourism: The city was preparing to host the Republican National Convention later that year.

“Disney doesn’t do anything without research,” Hill said, “and one of the things that the folks at Disney knew was that … Philadelphia was a huge feeder market for the Orlando parks. They knew there was already an appetite for Disney products coming out of this area.”

And what Disney wants, Disney gets.

On a scouting trip to Philadelphia, Disney executives came across a plot of land at the corner of Eighth and Market that had once been home to the famed Gimbels department store. The tract had been converted into a surface-level parking lot. Disney thought it would be the perfect spot to set up shop.

When Rendell was sworn in as mayor in January 1992, Philadelphia was in shambles.

“The city was on the verge of bankruptcy,” said Frank DiCicco, who served on City Council from 1996 to 2012. He represented Philadelphia’s First District, which stretches east of City Hall from the River Wards to South Philadelphia.

Eighth and Market was the heart of his district.

“We had junk bond ratings,” he said. “No one was investing or building in the city; there was no confidence. Everyone felt as if things were going to get worse. And because of the way that Mayor Rendell handled things, he was able to negotiate with the unions and other folks and make Philadelphians believe in this city.”

But for all the headway during Rendell’s two terms, there was a catch.

“Ed Rendell’s career started with a famous picture of him cleaning toilets in City Hall,” said Harris Steinberg, executive director of the Lindy Institute for Urban Innovation at Drexel University. “He was demonstrating that we had reached that nadir, that we needed to get out of the toilets, go up and stand proudly down by the [Delaware River] waterfront, or on Market Street, or on Broad Street.

“He did whatever he could to create these dynamic [projects], but it was tourism-driven. It was all about bringing people into the city from outside the city. It wasn’t about lifting up the city from within and bringing things that Philadelphians wanted. These [ideas] were all imposed from afar. They were either stolen from other places and cut and pasted and brought into Philadelphia, but it didn’t necessarily resonate with Philadelphians. And in many ways, that most likely was one of the reasons for the death of these projects.” Frank DiCicco served on Philadelphia City Council for 16 years. He represented the First District, which to this day still includes the corner of Eighth and Market streets.

DisneyQuest Chicago opened its doors on June 16, 1999, amid great fanfare: Fireworks exploded up above while a Buzz Lightyear mascot rappelled down a building to battle a contingent of army soldiers.

It didn’t take long, though, for The Walt Disney Company to realize there was a flaw in the DisneyQuest business model.

“The irony here,” said Hill, “is if you went to the Chicago DisneyQuest on a Friday, Saturday or Sunday, the place was packed. But on the other hand, Monday through Thursday, that was the real problem.”

Disney had created the perfect regional park for the weekend, but weekday attendance numbers just weren’t there.

Meanwhile, in Philadelphia, The Goldenberg Group created, sculpted and brought on the DisneyQuest project at Eighth and Market. The entertainment complex was to be called the Pavilion at Market East, and DisneyQuest was supposed to be the flagship tenant.

“We actually dug a giant hole and had steel on site ready to build,” Ken Goldenberg, The Goldenberg Group’s founder, president and CEO, said via email. “But then, the concept started to falter nationally.”

Warning signs emerged throughout 1999 — and Disney still wanted to open in Philadelphia by the summer of 2000. The timeline was aggressive.

“I don’t honestly know if there was anything Philadelphia could have done to save the DisneyQuest thing at that point,” said Hill. “By the time they were breaking ground in Philly, there were already people within the company who were looking at the spreadsheets and realizing they weren’t going to make the money that they thought off of this.”

“We kept working assiduously to bring the rest of the complex to fruition,” Goldenberg wrote, “but then the whole urban entertainment industry more or less collapsed.”

Disney told the city in the spring of 2000 that it was backing out. All that was left at Eighth and Market was the hole Goldenberg dug. 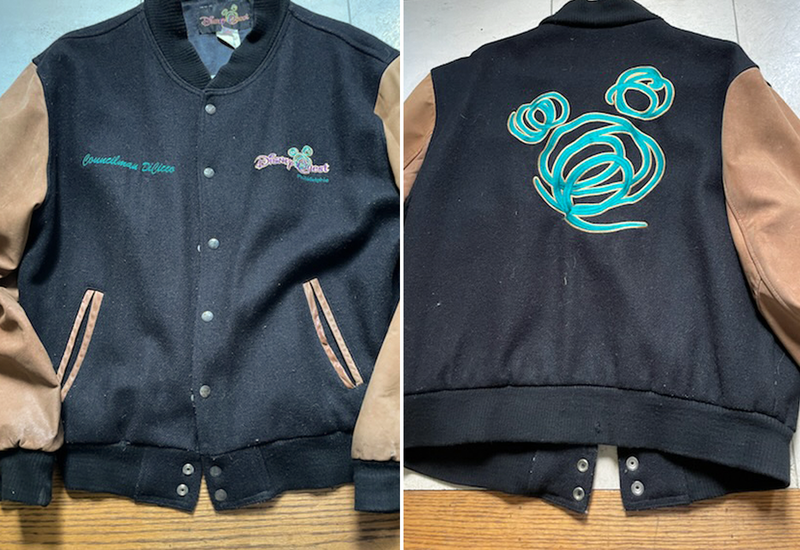 For his role in helping facilitate the project, Frank DiCicco received a personalized DisneyQuest Philadelphia bomber jacket. He remembers being one of only three people who received the gift.

In the aftermath of DisneyQuest, Frank DiCicco and The Goldenberg Group took another big swing at developing Eighth and Market, this time bidding for Philadelphia’s second casino license. They came close, proposing a higher-end boutique casino with Mohegan Sun, but narrowly lost out.

“I thought any type of entertainment venue would be helpful to Market East because it’ll bring crowds, not just tourists,” said DiCicco, who now runs a private consulting firm in Center City.

Ultimately, the hole at Eighth and Market, which was dubiously dubbed the “Disney Hole,” became a massive surface-level parking lot. It boasts roughly 300 spaces. 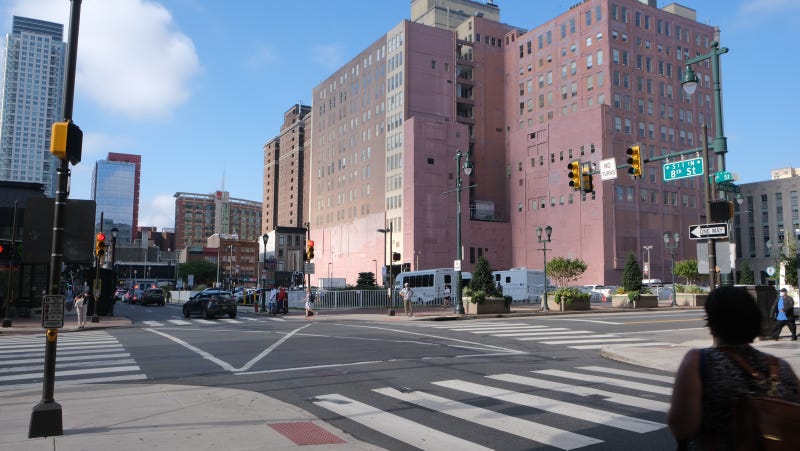 As for the site itself, there’s no denying its potential, then and now.

“We always believed that Eighth and Market had to be developed [to] lift up the whole of East Market Street and act as a major connector between City Hall, the [Pennsylvania] Convention Center, Independence Hall and the [Delaware River] waterfront,” Goldenberg said.

“If you build it in a way that is interesting, that’s inviting, that draws local folks, they will use it,” he said. “We’ve seen that time and time again.”

Just not at Eighth and Market. At least not yet.