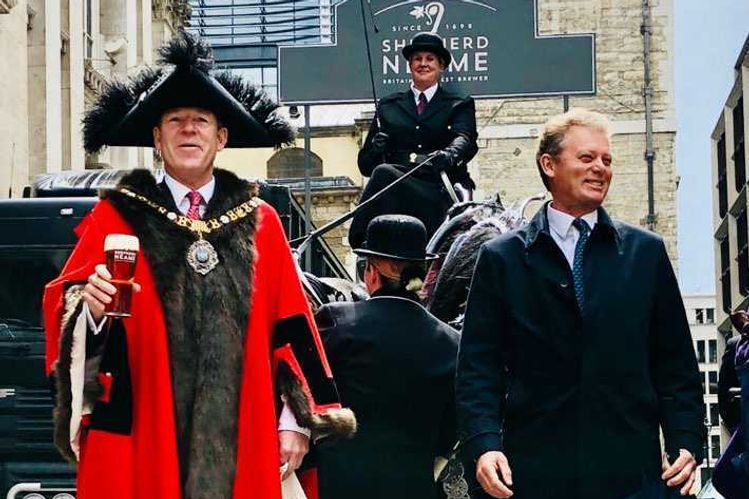 The City’s grand reopening on 17 May was more damp squib than Big Bang, with the wet streets of the Square Mile remaining subdued.

“Just look around,” said Charles, a worker at a financial services firm, speaking outside the Bank of England and gesturing to the empty streets around the normally busy Bank junction. “You can walk down the street without any fear of being run over.”

Charles was among the few City staff milling about on the rainy and overcast Monday when bars and restaurants opened their doors, allowing patrons inside for the first time this year. Some were in a celebratory mood: to mark the reopening of the City’s hospitality sector, Lord Mayor WIlliam Russell rode a horse-drawn dray in his full regalia from Mansion House to the Old Doctor Butler’s Head pub on Masons Avenue.

Speaking to Financial News in the alley outside the pub, the Lord Mayor stressed the need for office workers to come back and get behind the City’s small businesses.

“People forget that 99% of the companies in the Square Mile are SMEs. A lot of them are in hospitality, a lot of them are small Ma and Pa stores and coffee shops, and we need to support them,” he said.

Some were hopeful that the reopening would start to mark a recovery from the tough times over the last 14 months.

“It’s nice to see a few regulars back, we want to see more of the offices coming back, and they need to come, to get the City going, we need the City vibe back,” Jayne Redrup, landlady of the Lord Raglan on St Martin’s Le Grand said. “We need the City back.”

“People are definitely enjoying it, we’ve got quite a lot of bookings in the evening and a lot of walk-ins for now,” Mary at the New Moon in Leadenhall Market said.

Irina, working in suit shop Leonard Jay on Fenchurch Street, said footfall had improved in recent weeks, but she said sales had not been particularly buoyant.

“[There’s been] a slight improvement in footfall, but figure-wise it’s still not there,” she said.

Despite the move to tracksuit-working during the last year of working from home, Irina said there was still demand for suits from City workers.

“I have been pleasantly surprised,” she said. “A gentleman came in today, he said that even though he doesn’t have to wear a suit, he hasn’t worn a suit since last March, so he was excited to wear one. That was music to our ears,” she said.

“We are fighting through, we are here for our loyal customers. I am always hopeful, I am always positive,” she added.

Lee, a black-cab driver, hailed FN’s correspondent while he was taking a picture of balloons festooning a branch of Soho Coffee Co on Gresham Street.

“I’m liking it,” he said of the reopening mood. “Look at the colours, the buzz; in general people’s attitudes are very upbeat, there is that feeling that you’re all in it together,” he said.

Despite the optimism, the wet and overcast City remained quiet, but some of the people FN spoke to said in the hybrid working era it tended to be busier in midweek.

“We are trying to get the team to come in on a Friday by taking them out to the pub,” Charles who worked in investment said.

“The long weekend will become the norm,” he said, “You can no longer make the argument that you can’t work from home because it is not as effective, because actually productivity went through the roof for us when we started working from home” .

Despite the benefits of homeworking, he said he hoped people would return to the office.

“The City has to get back, it’s vitally important. The young have got to learn from the old, the old therefore have to come in,” he said.

“The City should not be like this,” he said, gesturing to the empty streets. “The City is very important for the economy and you have got to get people back,” he said.

“We had 526,000 people coming to the Square Mile in February 2019 and it’s going to take us some time to get back to that figure, but that’s what we want to encourage over time,” The Lord Mayor told FN.

“I’m a big believer that the office is not dead, you need creativity and collaboration and you can’t always get that over Zoom or working from home,” he added.

Another Charles, who said he worked in investment, described the return as a “long, slow haul.”

“We have an office of 35 and there are three people in today,” he said. “We are encouraging everyone to come back if they can, but it’s not straightforward.”

To contact the author of this story with feedback or news, email James Booth