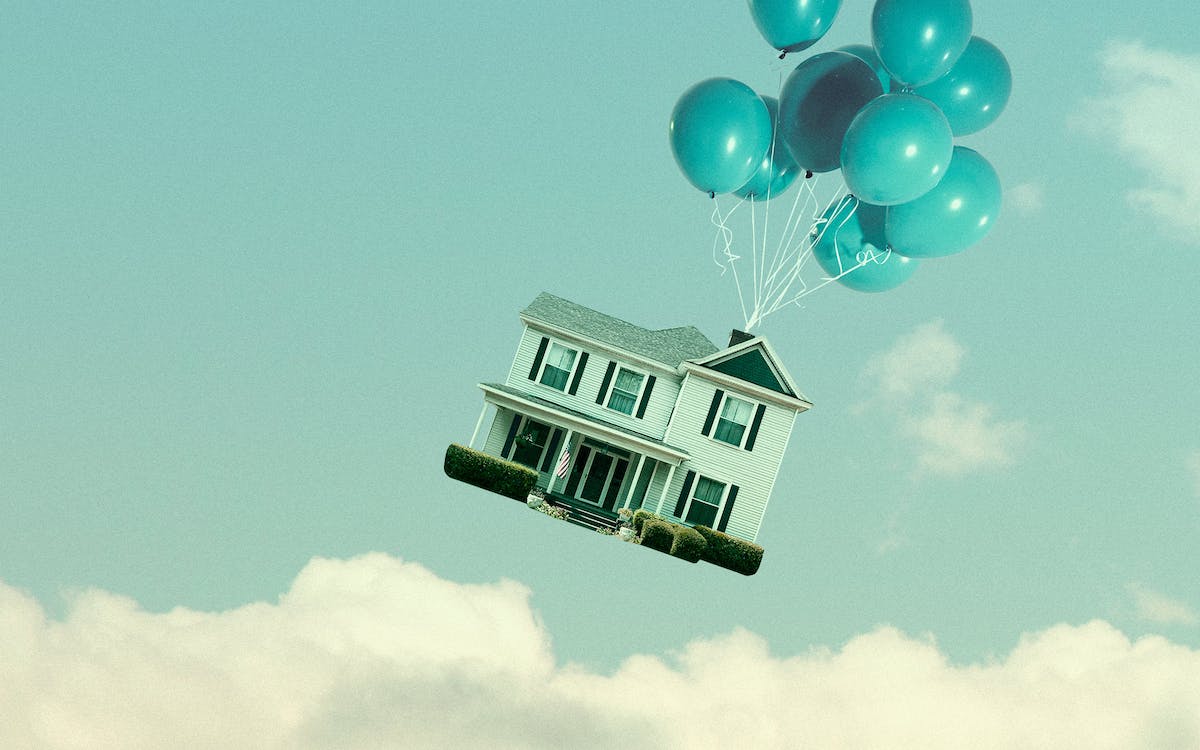 Lying in the Postpartum Unit at the Woman’s Hospital of Texas one morning this spring, her newborn son dozing beside her, Michelle Reyna Wymes sensed that she needed more rest. But as she began to emerge from her daze, the 37-year-old realtor remembered that she had another baby to attend to. Hours before she’d gone into labor, she’d received multiple offers for a $1.1 million, four-bedroom home she was representing in Houston’s sought-after Memorial neighborhood.

She turned to her husband with an urgent command: “Hand me my phone!” Moments later, she was back to work. “My recovery was no longer relevant,” said Reyna Wymes, who ended up writing multiple purchase offers from her hospital bed. “You might get twenty offers in an hour, but if you don’t respond to the best ones within hours, everything can change.” With so many buyers flirting with many properties, “it’s like the Wild West out there.”

Any other year, Reyna Wymes might have felt able to delay the negotiations with buyers until she’d been released from the hospital. But in the Texas real estate frenzy of 2021, the market’s demands are unrelenting. Just over a year ago, the pandemic brought the nation’s real estate market to a near-halt as stay-at-home orders and economic uncertainty sent home sales plunging. In Texas, the market was so lifeless through the early summer that Reyna Wymes called a service that schedules home showings to make sure her account was still operational. But by the end of the year, Texas added more than 370,000 new residents from out of state. Today, the state’s major cities are all among the most active real estate markets nationwide. Austin, where real estate rebounded earlier than in most cities in the country, is expected to be the nation’s “hottest” market for the second year in a row, according to Zillow.

In cities across the state, agents describe a buying frenzy that has defied models, unleashed record-breaking, all-cash bidding wars, and pulverized middle-class home buyers who are unable to compete. To stay abreast of real estate trends, agents used to do a market analysis once a week. Now, the life cycle of market data is measured in days, as soaring home prices can fluctuate as much as 20 percent in a week. “I’ve sold multiple homes to out-of-state buyers over Facetime, sight unseen,” explained one Houston agent, who asked to remain anonymous to protect her clients’ privacy. “Nothing is normal right now. Every day brings a new pinnacle.”

Texas Monthly consulted the industry’s experts, interviewing realtors in cities across the state about what they’re witnessing on the front lines of the bidding wars. The anecdotes that emerged range from astonishing to absurd, with some of the state’s most successful agents admitting that—despite immense resources and experience—the chaos of the housing market has stripped them of their predictive powers and turned their own lives upside down.

Wade Giles, one of Austin’s top luxury market realtors, said his life has been “a whirlwind” since at least Thanksgiving, when the demands of the job became so incessant that the 36-year-old was forced to retreat to a restroom at his mother’s house to avoid upsetting relatives with his constant phone use. In recent months, he’s lost touch with friends. His sixteen-hours-a-day, seven-days-a-week schedule—which begins at 6:30 a.m. and lasts well into the night thanks to phone calls from his West Coast clientele—has caused him to shed twenty pounds, he says (he stops eating when stressed). The round-the-clock hours are shared by realtors across the state. During a recent vacation at a Disney resort in Hawaii, Janine Bayer, a 38-year-old Dallasite, found herself in her villa’s kitchen at 5 a.m., whispering advice to her clients. “I didn’t tell my clients I was going out of town for a vacation because I knew I was going to work just as hard, regardless of whether I was officially on the clock,” she said.

Realtors say many prospective buyers are not prepared for the battlefield that awaits them. When the losses to cash-wielding Californians start to add up, Jessica Mejia, a 28-year-old San Antonio real estate agent, advises retreat. “I try to keep our buyers motivated, but sometimes that means saying, ‘Maybe you need to go back and rent for another six months because of how intense this market is,’” she said. Others suggest a different approach. To keep her clients from becoming shell-shocked in a hypercompetitive market, Bayer tells them to see even more homes than usual. So far, her own record is ten showings in a single day, but a colleague recently managed to complete a marathon fourteen showings. “Sure, agents are taking a real beating out there,” Bayer said, assuming a Pattonesque, wartime pose, “but that’s what it takes to succeed in a market as tough as this one.” For some buyers, the fight can start to feel Sisyphean.

The realities of the hellacious process often begin to set in at those open houses. Ian Grossman, an Austin realtor whose TikTok videos have gone viral, solemnly prepares his clients for showings like a dad prepping his kids for a weekend hike through rough terrain. He reminds them to show up as early as possible, to wear comfortable shoes, and to bring water, snacks, and an umbrella for lines that may be hours long. Alex Wright, an Austin agent who plays in a rock band, compares the recent lines at showings to those at South by Southwest. She says prospective buyers often arrive and have looks of “pain” and “horror” as they encounter 150 versions of themselves, many with bigger budgets and nicer vehicles. “They see the house online and they start to picture their lives there and—even though everyone knows there’s a lot of competition—the reality really hits when you see this insane line down the street before you even set foot inside the house.”

Even with the best preparation, success is far from assured. After a Saturday open house, Grossman said, homes sell so quickly that offers have to be made by Sunday afternoon. “The sellers have all the power right now and the buyers have no choice but to play their game,” he said. Because of the competition, many prospective buyers forgo an inspection and waive provisions allowing them to back out of a contract if the appraisal is low. In a seller’s market, a realtor’s goal is to reclaim some power from the homeowners, but keen negotiating skills have become the real estate equivalent of a vestigial tail: “I’ve had experiences where I’ve offered five hundred to six hundred thousand over the asking price and still not been the priority,” said Giles. (His team has already sold close to $50 million worth of real estate this year, nearly surpassing the total from all of 2020.)

The Austin market is so hot, Giles said, that some of his upscale clients in Los Angeles and San Francisco have decided to stay put, souring on the Texas city because they no longer consider it affordable. The scene across the state is not too different. Back in January, realtors in the Dallas area said, clients could purchase a modest-sized, single-family home for $5,000 above listing price. But in recent weeks, a home in West Plano sold for $120,000 over a listing amount in the $500,000 range and a property in Southlake sold for $300,000 above its million-dollar asking price. In Houston and San Antonio, median home prices have skyrocketed, with both cities seeing double-digit year-over-year growth for several months in a row, as well as limited inventory. In the Alamo City, though home prices are still significantly lower than in its trendy neighbor eighty miles to the north, the market has seen one of largest reductions in inventory of any city in the country.

The inflated prices are no longer limited to Texas’s desirable big cities, though. Grossman noted that a client in Buda—a commuter town fifteen miles south of Austin known chiefly for its passionate embrace of wiener dog racing—recently got beat out on a $400,000 home after offering $70,000 over the asking price. “Even a year ago, this same house would’ve gotten sold in the low three hundreds,” Grossman said. Three hours east, in Galveston, real estate agent Brian Kuhn said the boom is beginning to wash over the historic island as well. Though most buyers remain Texans seeking a second home, out-of-staters from California, Colorado, and New York, lured by low prices and mild winters, are increasingly common. Several years ago, Kuhn estimated, buyers could secure a two-bedroom, one-bathroom bungalow for around $165,000. This year, he said, “Anything under three hundred thousand dollars would be considered under market value.”

During the boom, agents in every Texas market agree that there’s nothing more persuasive than a substantial cash offer that is no less than 25 percent over the asking price. For clients with more modest budgets, agents have been forced to devise new strategies—some hokey, others humiliating—to keep their offers afloat. Typical gamesmanship involves a persuasive letter, but even bolder agents have resorted to filming videos of family members standing outside a desired house pleading for their offer to be accepted, with each individual proclaiming their favorite elements of the residence until the owner’s ego is sufficiently stroked. To stand out among an outpouring of attractive offers, one of Giles’s clients penned a handwritten letter from the perspective of his dog. It explained what the home, and especially its lush green lawn, would mean to the animal. For a final flourish, the client purchased an ink pad and used it to stamp the missive with an actual paw print. He got the house. “People are desperate,” Giles said, chuckling. “And desperate times call for desperate measures.”

Perhaps none has been more desperate than that of a 36-year-old Austin social worker named Claire, who asked Texas Monthly to withhold her last name because of privacy concerns. When she and her husband realized after losing out on houses in the North Austin neighborhood of Allandale that they were underbidding by hundreds of thousands of dollars, their realtor suggested they get creative. They posted their story on the neighborhood’s Facebook page, asking locals for tips about homeowners who might be interested in selling. Working on intel from friendly Facebook users—much of it speculation based on neighbors’ landscaping habits—and a list of names of prospective sellers in the area that numbered in the thousands, the realtor homed in on two hundred property owners. Claire sent all of them letters outlining how desperate her family was to find a home in the area. She appended a family photo to each, which made her feel a bit uneasy. The elaborate effort resulted in a single bite, a homeowner who, as it turned out, had attended the same college and church as Claire. Months later, they closed on the house. The process left her certain of one thing: “I never want to move again; we have to live here forever.”