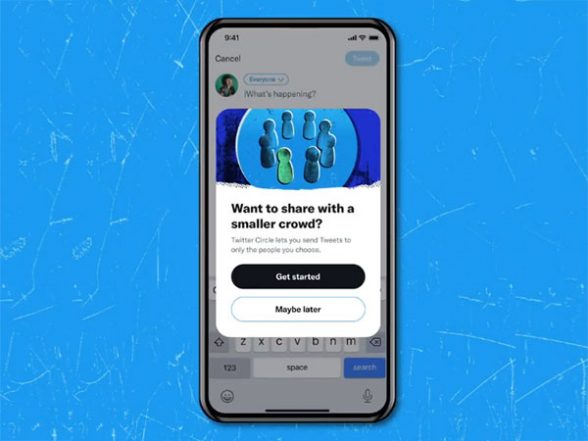 San Francisco [US], May 4 (ANI): Twitter is testing a new feature called ‘Twitter Circle’ where users can handpick a smaller crowd of 150 people with whom they want to share their tweets.

The new Twitter feature seems to be on a similar line to Instagram’s Close Friends feature, which allows selecting the audience for their stories.

Announcing the feature on Tuesday, Twitter said, “Some Tweets are for everyone and others are just for people you’ve picked.”

“We’re now testing Twitter Circle, which lets you add up to 150 people who can see your Tweets when you want to share with a smaller crowd. Some of you can create your own Twitter Circle beginning today!,” Twitter Safety tweeted.

Since the microblogging social media platform says that for now the new feature will be appearing for “Some of you”, so if you have it, then here is how it works:

First, you will choose upto 150 people irrespective of whether you follow them or not. Then while twitting anything selects the option ‘Twitter Circle’ to limit your tweet to only those people you have selected.

“The users can edit the list of people that they have selected in ‘Twitter Circle’ anytime they want. Also, people will not be notified if you remove them,” said the company.

Twitteratis who were able to access the feature have started sharing their feedback.

“At first I didn’t understand this, but this is actually a pretty cool feature, and I’ve felt the need for something like this lately,” tweeted a user.

Meanwhile, some have picked up on the announcement while sharing funny takes on it.

“I don’t think more than 150 people have ever seen my tweets anyway,” a user tweeted.

Another user tweeted, “I have only two people to add on to Twitter Circle, for me it’s like a line or just a dot, not a circle.”

While some users got curious and have raised quarries regarding the system.

“Can we create different circles for different crowds? For instance, my Star Wars friends, friends in my hometown, other interests, etc?” a user tweeted.

Another asked, “how is it different from list and group chats?”

However, Musk’s USD 44 billion deal to acquire Twitter Inc. is still months away from closing. (ANI)