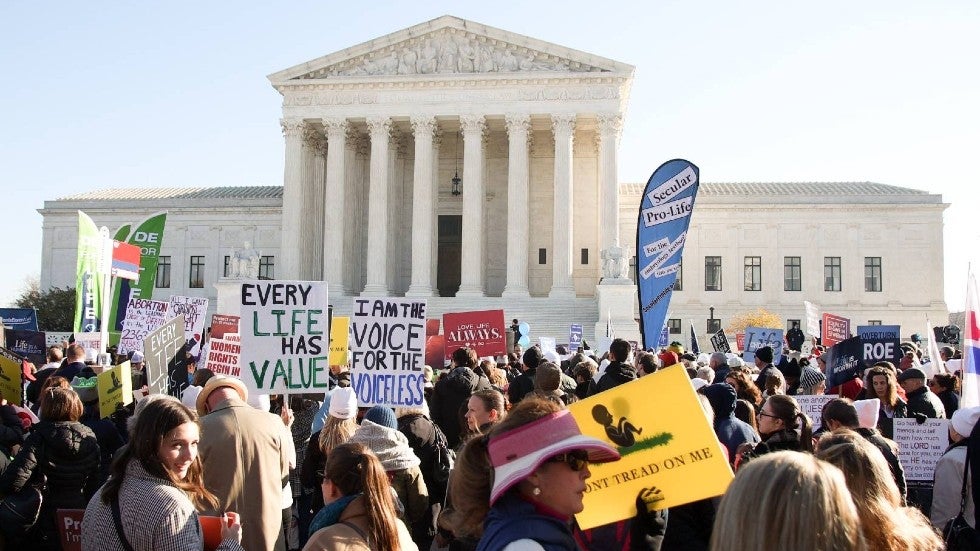 The leaked Supreme Court draft opinion that would overturn Roe v. Wade and the continued Russian invasion of Ukraine is expected to dominate the Sunday show circuit this weekend.

On Monday, Politico published a draft opinion written by conservative Justice Samuel Alito on a Mississippi abortion law that would ban the procedure after 15 weeks of pregnancy. The draft opinion would effectively do away with federal abortion protections, and leave the decision on the matter to the states.

The document was written in February, but its publishing this week has sent shockwaves through the nation, prompting condemnation from many Democrats and protests in several cities in the country.

“The Republican-appointed justices’ reported votes to overturn Roe v Wade would go down as an abomination, one of the worst and most damaging decisions in modern history,” Speaker of the House Nancy Pelosi (D-Calif.), who will appear on CBS’ “Face the Nation,” said following news of the leak.

In the Senate, Democrats want to vote on legislation that would protect abortion rights around the country, although they likely won’t be able to garner enough support.

“Now that the court is poised to strike down Roe, it is my intention for the Senate to hold a vote on legislation to codify the right to an abortion in law,” Senate Majority Leader Charles Schumer (D-N.Y.) said Tuesday. “A vote on this legislation is not an abstract exercise. This is as urgent and real as it gets. We’ll vote to protect a women’s right to choose.”

“It is a fundamental right for a woman to make her own health decisions. We must protect the right to choose and codify Roe v Wade into law,” Sen. Amy Klobuchar (D-Minn.) tweeted earlier this week.

Republicans including Sens. Marco Rubio (Fla.) and Ted Cruz (Texas) called for an investigation and repercussions for the culprit following the leak. They expressed outrage that such an unprecedented disclosure occurred before a final decision was issued. Some members of the GOP claimed that the person who leaked the document was liberal-leaning.

“The next time you hear the far left preaching about how they are fighting to preserve our Republic’s institutions & norms remember how they leaked a Supreme Court opinion in an attempt to intimidate the justices on abortion,” Sen. Marco Rubio (R-Fla.) tweeted after the news.

Focus will also be on the Biden administration’s continued aid to Ukraine ahead of Russia’s Victory Day.

Officials have said Russia is planning to officially declare war on Ukraine on May 9. May 9 is the referred to as “Victory Day” in Russia and is a holiday that celebrates the defeat of Nazi Germany.

However, Russia has dismissed these claims.

On Friday, President Biden said the U.S. is sending a security assistance package that includes ammunition to Ukraine worth $150 million.

“Today, the United States is continuing our strong support for the brave people of Ukraine as they defend their country against Russia’s ongoing aggression,” Biden said.

The new package adds to the billions in aid the U.S. has given Ukraine since Russia invaded the country.

Oksana Markarova, Ukraine’s ambassador to the United States, will be on CBS’s “Face the Nation.”

Below is the full list of guests scheduled to appear on this week’s Sunday talk shows:

Intel leaks show US success in Ukraine — but come with risks