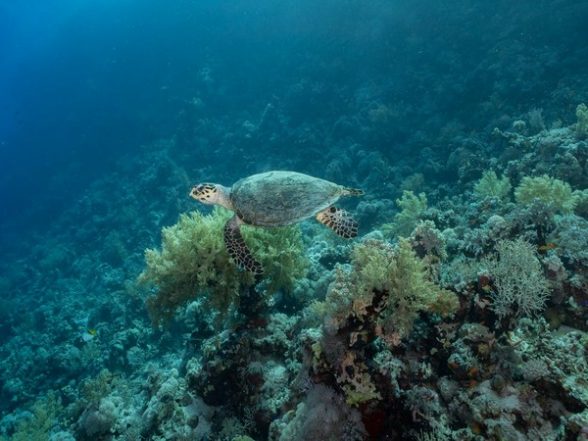 Washington [US], August 6 (ANI): Tropical coastal ecosystems are among the most biodiverse areas on Earth. And they’re also on the front lines of effects caused by human activity. That’s why it’s becoming increasingly important, especially as human populations increase, to manage the impacts of runoff and wastewater that flow into the sea.

“Tropical coastal ecosystems, such as coral reefs, are oligotrophic, meaning they are located in nutrient-poor waters and have therefore adapted to these conditions,” said Madeline Berger, a researcher at UC Santa Barbara’s National Center for Ecological Analysis & Synthesis (NCEAS). “An increased influx of nutrients can therefore disrupt ecosystem functioning.”

In a paper that appears in the journal Ocean and Coastal Management, lead author Berger and her colleagues tackle the issue of nutrient pollution through a case study in coastal Central America. The result? Agricultural operations are responsible for the vast majority of nitrogen pollution that flows into the Mesoamerican Reef Region. Knowing where the pollution comes from, the researchers say, will help managers tailor solutions for mitigation.

“Our study highlights that different management strategies will need to be employed in different watersheds to help reduce nutrient input that can have detrimental impacts on coral reef and seagrass health in this area,” Berger said.

Also Read | Friendship Day 2022: How To Make Friendship Bands at Home? DIY Bracelets To Prepare for Your Best Friends on This Special Day!.

The Mesoamerican Reef (MAR) is the largest barrier reef in the western hemisphere, second only to Australia’s Great Barrier Reef in terms of size. Shared by Mexico, Belize, Guatemala and Honduras, it stretches for almost 700 miles and hosts a variety of creatures, including hundreds of fish species, critically endangered marine turtles, as well as mollusks, marine mammals and shorebirds. These habitats and communities, in turn, sustain local fishing as well as tourism. Millions of people flock each year to resorts and ports in Cancun, Cozumel, Belize City and other points along the coast on their Caribbean vacations.

But the reef is also in trouble. More than half of it is in poor condition due to various threats that include ocean warming, unsustainable fishing and pollution.

“Nutrient pollution is a known threat to coral reef and seagrass,” Berger said. Too much nitrogen, a common pollutant, results in a chain of events that results in oxygen-free “dead zones,” and acidic conditions that can severely weaken or kill fish and other animals. Water quality issues are also among the main reasons for sindrome blanco, a pathogenic disease that leads to white lesions that spread over coral, leading to death in mere weeks. Nutrient pollution in this region, according to the researchers, “comes from four sources: agricultural production, human wastewater, atmospheric deposition and wild animal scat,” with agriculture and human wastewater suspected of contributing the majority of the pollution.

To tell how much of the pollution came from upstream agriculture or human wastewater, the researchers dove into several models examining the watersheds that feed into the MAR. One was a global wastewater model that estimates the amount of nitrogen pollution based on population maps, protein consumption and known human nitrogen excretion rates, which was adapted to this specific region.

The researchers also modelled impacts from the millions of tourists that roam up and down the coast using hotel location data, cruise ship location data and monthly statistics reported by tourism bureaus in each country. “Basically, we were trying to figure out where tourists were pooping, which turns out to be pretty tricky,” she said.

The researchers found that agriculture was by far the largest contributor (92%) of nitrogen to the MAR, due to fertilizer and livestock waste runoff that make their way to the ocean via rivers and streams. Two rivers, the Rio Ulua in Honduras and Rio Motagua in Guatemala, contributed more than 50% of the modeled nitrogen pollution, collecting runoff from several upstream tributaries and draining into the ocean. Meanwhile, 90% of the modeled nitrogen pollution was attributed to 20 (out of 430) watersheds, of which 11 are located in Guatemala or Honduras. An estimated 80% of coral reefs and 68% of seagrass beds were exposed to nitrogen pollution from watershed plumes.

The results are indicative of the complexity of the pollution issue — even land use changes and agricultural expansion very far inland can have impacts to marine ecosystems, Berger said. Additionally, the researchers found that high biodiversity habitats were more exposed to plumes originating from smaller, coastal watersheds. And while tourism represented a very small proportion of the overall pollution, the watersheds that contributed the most pollution tended to also have high number of tourists or be near those that did.

“The exercise also raised the questions of how tourists, or tourist demand, has larger impacts beyond just the physical presence of more people — such as increased building or expanding agriculture — that can also exacerbate pollution input,” Berger said. The researchers hope that ultimately a granular approach that can be used to track the origins and paths of nitrogen and other nutrient runoff and their impacts will enable coastal managers to develop the sophisticated action plans necessary to mitigate the pollution of some of the world’s most biodiverse coastal regions. (ANI)