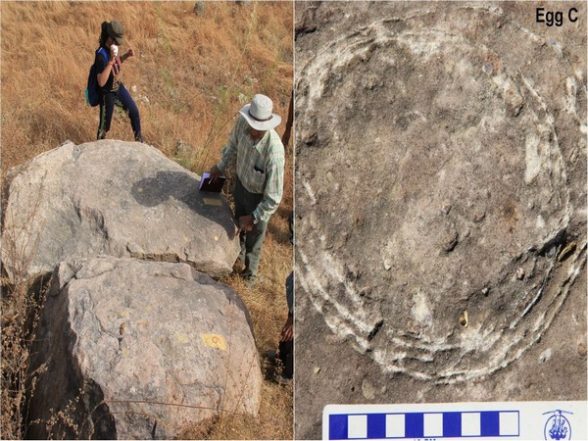 Dhar (Madhya Pradesh) [India], June 13 (ANI): A team of Indian researchers, for the first time in the fossil history, has discovered an egg-in-egg or abnormal titanosaurid dinosaur egg from the Bagh area in Dhar District, Madhya Pradesh state (Central India).

This finding has been published in the latest issue of Scientific Reports, a Nature Group journal, under the title ‘First ovum-in-ovo pathological titanosaurid egg throws light on the reproductive biology of sauropod dinosaurs’.

The Upper Cretaceous Lameta Formation of Central India is long known for its dinosaur fossils (both skeletal and egg remains). Recently, the authors of the above-cited publication documented a large number (52) of titanosaurid sauropod nests near the village Padlya close to Bagh town in Dhar District, Madhya Pradesh, India. While studying these nests, the researchers came across one abnormal egg that merits special attention from the scientific community.

The research team found a sauropod dinosaur nest (designated P7) consisting of 10 eggs close to the village Padlya including the abnormal egg (egg C). The abnormal egg displays two continuous and circular eggshell layers separated by a wide gap reminiscent of ovum-in-ovo (one egg inside another egg) pathology of birds. The microstructure of the pathological egg as well as that of an adjacent egg in the same nest (P7) identifies it with that of titanosaurid sauropod dinosaurs.

Until this new finding from India, no egg-in-egg abnormal fossil egg was found in dinosaurs and for that matter in other reptiles like turtles, lizards, and crocodiles. In the past, it was suggested that dinosaurs had a reproductive function similar to that of turtles and other reptiles (unsegmented oviduct) in contrast to the segmented reproductive tract of crocodiles and birds with separate regions of membrane and shell deposition.

Although crocodiles have separate regions of shell membrane and mineralized shell deposition, they ovulate and release all the eggs simultaneously as in turtles and other reptiles as contrasted to the sequential ovulation of birds, laying one egg at a time. The new discovery of an ovum-in-ovo pathological egg characteristic of birds in titanosaurids argues for a segmented oviduct as in crocodiles and birds and possible sequential laying of eggs as in birds.

“The new pathological egg is a rare and important find as no ovum-in-ovo egg was found in reptiles until now and as it brings out significant information on whether dinosaurs had a reproductive biology similar to that of turtles and lizards or their immediate cousins crocodiles and birds,” said Prof. Guntupalli V.R. Prasad from the University of Delhi who is the corresponding author of the published article.

Another co-author of the paper Mr Vishal Verma from Bakaner Higher Secondary School and a committed campaigner for the conservation of fossil sites and instrumental in establishing four local museums in the area is of the opinion that “Bagh-Kukshi area holds key to many such wonderful fossil finds provided systematic scientific exploration is carried out as in the present case”.

The new find highlights the fact that central and western India hold great potential for dinosaur fossils which may offer important information on dinosaur oospecies diversity, nesting behavior and reproductive biology. The pathological egg was discovered while conducting PhD fieldwork by the lead author Dr.Harsha Dhiman in this region.