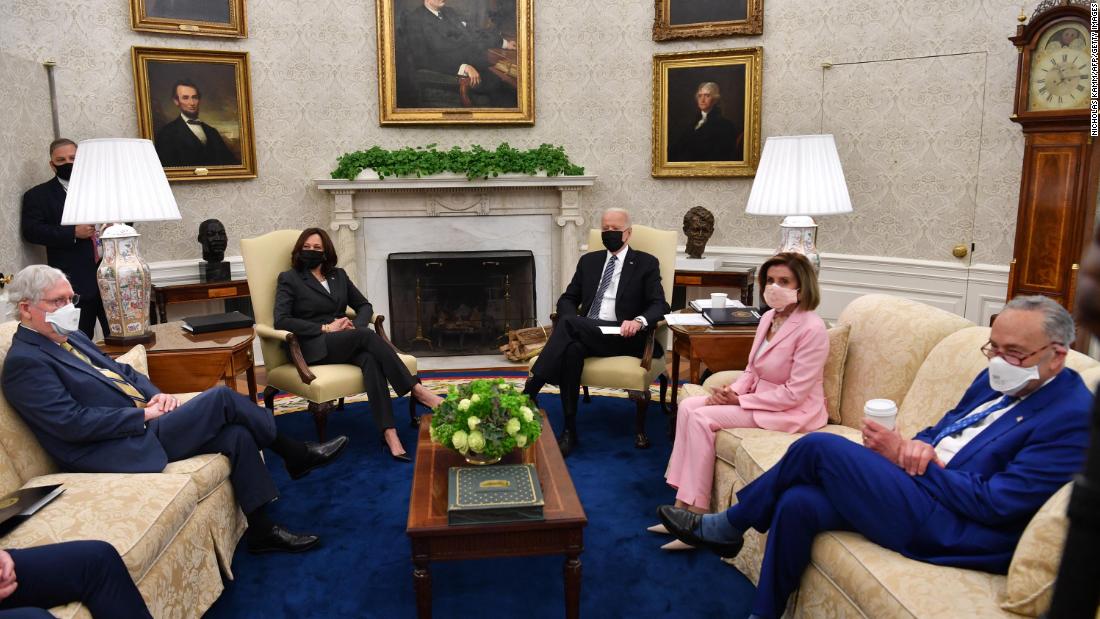 “There’s an estimation of somewhere between $700 billion and $1.3 trillion if we hire up more IRS agents and we go after those folks who are avoiding taxes at the top end,” Biden told MSNBC last week. “So let’s say it’s somewhere in between — that’s $1 trillion. I’m confident (Republicans) would go for that.”

They haven’t before, and may not this time either. Making sure high-income tax evaders pay up isn’t as automatically polarizing as raising tax rates, but the idea hasn’t gained political traction in recent years.

Yet it offers an escape from the corner into which conflicting red lines have painted the popular new President and his GOP adversaries. Republicans have ruled out the corporate tax increases Biden has proposed, while the president nixes Republican calls for “user fees” falling on middle- and working-class Americans.

“There may be ways to get this done that don’t cross anybody’s red line,” Transportation Secretary Pete Buttigieg told CNN’s Jim Sciutto.

Why there hasn’t been tougher enforcement

GOP resistance represents the biggest reason tougher tax enforcement hasn’t taken off yet. Reflecting the fears of wealthy donors and libertarian ideologues in an anti-government era, Republicans have sought to weaken rather than strengthen the IRS.

But it’s not the only reason. Some Democrats, too, view the idea skeptically, akin to airy Republican pledges to trim the budget of “waste, fraud and abuse.”

“It does have a history of people lying and exaggerating about it,” Summers acknowledged in an interview.

In President Bill Clinton’s Treasury Department, Summers faced “bureaucratic resistance from the scorekeepers” and lost a fight to incorporate tax-enforcement revenue gains into budget projections. In President Barack Obama’s administration, where he directed the National Economic Council, Tea Party Republicans accused the IRS of targeting them and forced budget cuts.

But those concerned about the integrity of the tax system, including former IRS commissioners under presidents of both parties, have continued to call for cracking down on tax evasion. In 2019, Summers co-authored a study asserting that a serious effort to close the “tax gap” could bring in more than $1 trillion over a decade.

“It’s not like some black magic calculation,” Summers said. Some experts have offered higher estimates, he added, and “I’ve been pretty careful to try to come in low.”

On this subject, Summers retains influence even as his warnings about inflation tied to Biden’s stimulus annoy White House economists. His co-author Natasha Sarin has become deputy assistant secretary for economic policy at the Treasury Department.

The need to finance Biden’s mammoth spending proposals, coupled with rising public concern about income inequality, may overcome past resistance. The administration proposes to combat tax evasion by pouring $80 billion into the IRS and imposing new transaction reporting requirements on financial institutions.

Whether stronger audits and data collection will yield the $700 billion the White House projects is another question.

“It’s optimistic, at best,” observed Janet Holtzblatt, a former Treasury economist now at the Tax Policy Center. She said results would depend on how much new money goes for auditing and how quickly the long-beleaguered IRS can retool.

But even lower estimates are not trivial. Economists at the University of Pennsylvania estimated that Biden’s tax enforcement plan would bring in $480 billion over 10 years, and much more in the five years after that. That would almost cover the initial compromise offer by Senate Republicans to spend $568 billion on road, bridges and other physical infrastructure.

“Tax gap” revenue holds uncertain value for legislation Senate Democrats might pass on their own under budget “reconciliation” rules that prevent a Senate filibuster. Those rules bar deficit increases after 10 years and only recognize revenue sources the Congressional Budget Office “scores” as valid. The CBO traditionally has been loath to credit estimates from stronger tax enforcement.

Those constraints don’t apply, however, to ordinary legislation that clears the 60-vote filibuster threshold.

A bipartisan infrastructure deal could skip new revenue to pay for new spending altogether. But if Democrats and Republicans decide against increasing the deficit, they could place whatever value on tougher IRS enforcement they can agree on.

So is Summers, who sees conditions aligning behind an idea thwarted for more than three decades.

“I have long believed that the best way to raise revenue, first, is to enforce the law we have,” the former Treasury secretary said. “I think something’s going to happen. They’re laying the foundation.”