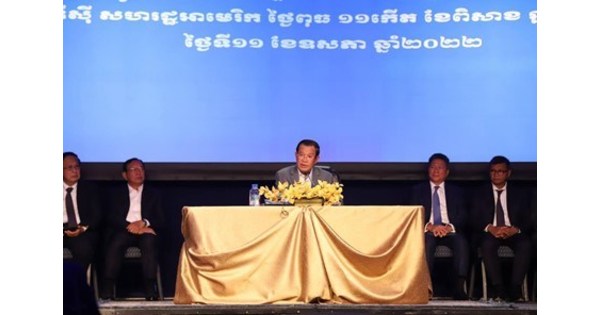 During a wide-ranging speech covering domestic and international issues, Prime Minister Hun described how his Government had defeated COVID-19.  “We beat COVID, showing that our healthcare system is strong… Cambodia might be a poor country, but we did not hesitate to make COVID vaccines free for everyone.”

On trade and investment, the Prime Minister told the audience, “This year we anticipate more investment in Cambodia.  The United States remains the top export destination for Cambodia.   And more and more US companies, like Ford, are investing in our country.”

Regarding Cambodia’s ties with China, Prime Minister Hun said, “We don’t choose between the United States and China.  Furthermore, under the Cambodian constitution, no foreign soldiers can be based in our country.  And our Constitution prohibits Cambodian soldiers from joining other countries’ wars.  The only exception is when we send the men and women of our military to join UN peacekeeping missions around the world.  It doesn’t make sense for [Ream] to be a Chinese naval base as the waters are too shallow to receive naval ships.”  He also spoke of how the government is reducing soldier numbers in order to increase healthcare spending.

On international affairs, the Prime Minister reiterated his support for Ukraine, saying, “If Russia divides Donetsk and Luhansk from Ukraine in the future, we will not recognize that.”

On ASEAN matters, Prime Minister Hun Sen described how his government was working to end violence in Myanmar while encouraging dialogue.

An estimated 300,000 people of Cambodian descent reside in the United States and Canada, with most of the population concentrated in California, Pennsylvania and Massachusetts.

Prime Minister Hun Sen is visiting Washington, DC for the US-ASEAN Summit, at which ASEAN leaders and President Joe Biden will meet in person for a dialogue on issues of mutual concern, including climate change, economic co-operation and the Russia–Ukraine war.