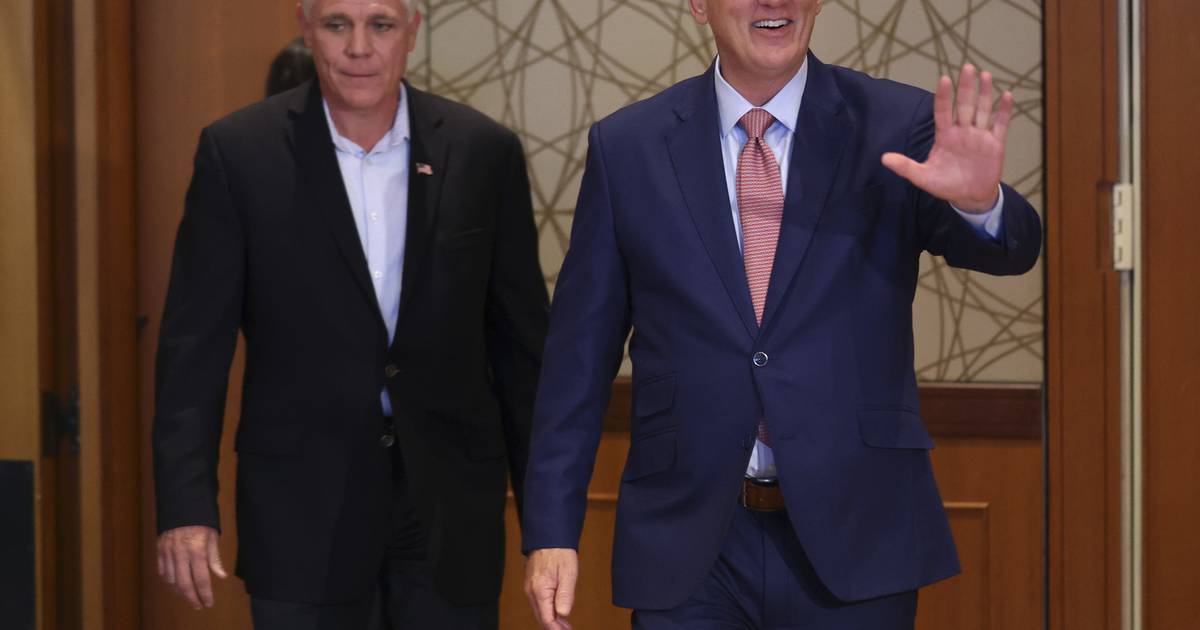 The Chicago area is at the fulcrum of the national midterm election fight this weekend, as local races tighten up.

Before speaking to a group of about 150 Republican supporters at a fundraiser at the Hyatt Lodge in Oak Brook, McCarthy was introduced as “the future speaker of the House.” Onstage, McCarthy and Pekau discussed crime and inflation and tried to rev up the crowd by noting that the GOP could retake the House in just a few days.

“There are a lot of places I can be, but I chose to be here. You know why? Because this race can determine the majority,” McCarthy said. “In four days we can change the course of history. We have a plan to do that.”

Earlier in the day, McCarthy campaigned downstate in Normal for Esther Joy King, the Republican candidate for the open 17th Congressional District seat, who is running against Democrat Eric Sorensen. The seat is currently held by Democratic U.S. Rep. Cheri Bustos, who chose not to run for reelection, so a win by King would flip to district for the GOP.

That the national Democratic and Republican parties are deploying such high-profile advocates in Illinois so close to the election speaks to the fact each side thinks congressional races are getting closer here, and every contest could play an important role in determining which side ends up with the majority in the U.S. House.

Biden is crisscrossing the country to try to help incumbents and candidates in Democratic strongholds such as Illinois, New Mexico and California, while McCarthy’s 11th-hour trip to the Chicago area to campaign for Pekau, who is mayor of Orland Park, underscores the importance of the race to Republicans and demonstrates that many in GOP leadership think a Pekau victory might be within the party’s grasp.

McCarthy, the minority leader from California, visited Oak Brook two weeks after House Speaker Nancy Pelosi traveled to the district, where she appeared with Casten at a hospital in Downers Grove to promote the need for protections to reproductive rights after the U.S. Supreme Court knocked down Roe v. Wade earlier this year.

As McCarthy was working to drum up support for Pekau on Friday night, Casten scheduled his own event with U.S. Sen. Richard Durbin literally down the hall in the same Oak Brook hotel to highlight Democrats’ work to save Social Security and lower prescription drug costs, and to contrast those efforts with Republican policies.

”What’s at stake is our democracy,” Casten told the liberal crowd of about 100, adding that abortion rights, climate change and gun regulation are on the line.

The high-profile political support on both sides comes as the candidates have grown increasingly pointed in their attacks against each other.

Pekau said Casten’s record on the economic and public safety problems most important to voters is “abysmal,” and that’s why Casten is trying so hard to make the race about abortion rights.

Casten, responding to the fact that Pekau received an award from the conservative activist organization Awake Illinois, called Pekau “a complete coward who was endorsed by a hate organization and doesn’t have the dignity to say it.” Pekau received the award forresisting, in his role as mayor, Gov. J.B. Pritzker’s coronavirus mask mandates.

Awake Illinois, which describes itself as a parental and constitutional rights organization that has opposed mask mandates, also recently opposed drag show events at the Downers Grove Public Library and a child-friendly drag event at a bakery in northwest suburban Lake in the Hills that were canceled after threats.

Casten first won the seat in 2018 after he defeated six-term Republican U.S. Rep. Peter Roskam. Before Roskam, much of the area was represented for more than 30 years by Republican Henry Hyde.

A Casten win in this election could set him up for the long term in the U.S. House, while a Pekau victory could indicate a swing back to Republican ascendance in the district. Following the 2020 census, congressional and state legislative districts were redrawn and, in Illinois, Democrats held the power to redraw those boundaries and did so with an eye toward protecting as many seats as possible — including the 6th District.

While Biden won the new 6th District by 54.5% to 43.6% over Donald Trump in 2020, according to a Daily Kos analysis, the district includes Southwest Side neighborhoods with large numbers of Republican voters in neighborhoods such as Garfield Ridge, Beverly and Mount Greenwood.

It also sweeps through nearby towns, including Orland Park and Alsip, and up through the west suburbs, taking in all or parts of Burr Ridge, Darien, Elmhurst, Hickory Hills, Oakbrook Terrace, Oak Forest, Oak Lawn, Orland Hills, Western Springs, Willowbrook and Worth, and extending north to Villa Park and west to Downers Grove.

In the nearby 11th District, which curves from west suburban Bolingbrook to far northwest suburban Woodstock, U.S. Rep. Bill Foster is trying to hang on against Republican Catalina Lauf.

Lauf, who has cited social media censorship, gun rights and illegal immigration as campaign issues, said in a statement ahead of Biden’s visit that “out of touch Bill Foster is attempting to throw a Hail Mary pass by bringing in a failed president whose support, even amongst Democrats, is underwater here in IL-11.”

Earlier Friday, McCarthy appeared at a brewery in Normal with King, who’s running for the northwestern Illinois 17th District. That prompted a spokesman for her Democratic opponent, Sorensen, to rip King for “campaigning with McCarthy who has already promised he would raise healthcare costs and put the future of Social Security at risk if he becomes Speaker.”