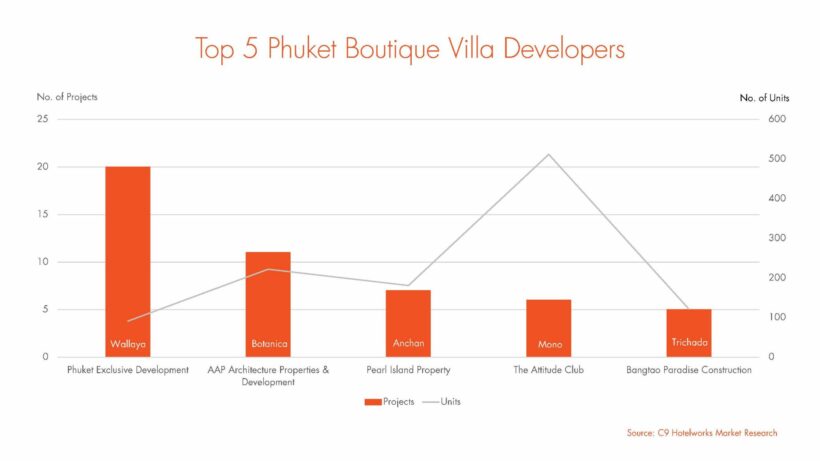 Phuket has witnessed a sharp change from 2019 when over 9 million tourists sought a place in the sun, highlighted by soaring numbers of Mainland Chinese. At that juncture, entry-level investment properties sprouted up though-out Phuket, mostly in large block condominiums. Many were hotel branded and promised high levels of guaranteed returns.

COVID19 cooled off that trend in short order and even the foreign buyers who have purchased off-plan properties were unable to visit for handovers of completed units. For the island’s brokerage community, the change of faces resulted in a lift in rental demand for villas and an uptick in purchases for completed homes. Thais from Bangkok flocked to Phuket, and expat families from Hong Kong, Singapore, and further afield were lured by a strong lifestyle community of international schools, hospitals, marinas, golf courses, and the promise of slower, outdoor-oriented living.

Today nowhere epitomizes the change in real estate demand than the rising resort West Coast area of Greater Cherntalay. Often referred to as Laguna, which is the namesake of the leading integrated resort, the development virtually rewrote the island’s map.

C9 Hotelworks latest market research has taken a dive into the key players and trends in the area and emerging micro bedroom community districts that are reflecting the highest level of real estate transaction activity. According to new data, there are five main boutique villa property developers who are amassing impressive levels of completed and sold-out projects.

What has been impressive from a business standpoint is these groups have been above to evolve and grow pricing points over relatively short timelines. For some, who played in the THB15-20 million level, their developments now are in the price band of USD30-80 million. This of course represents a critical change in the affluence of incoming buyers.

Another key trend that C9 Hotelworks research reports are that many real estate buyers have moved to not only residential properties but into commercial units, that can be leased out to restaurants and bars, offices, and retail shops. One developer that is centric to this is Boon Yongsakul of Boat Pattana. The group has unleashed an innovative model of uplifting traditional Thai shophouse strata-titled units and gained enormous pricing gains by modernizing them together with amenities in the Boat Avenue micro-community. These recurring investment properties are being snapped up quickly by both Thai and foreign buyers.

Turning to the resort-grade condominium market, the past few years have seen this sector splinter into two segments. There remains a market for entry-level investment type units as can be seen by the strong take-up rates of lowest-priced properties at developments with median pricing at THB5 million.

On the opposite end are end-users taking up one and two-bedroom units with a median price range of THB9-15 million. This segment is either younger individuals or couples looking for more spacious living and empty-nest older couples who in some cases are trading down as their children move away, or want a second/holiday home. This trend has been demonstrated in demand for larger multi-bedroom units at Laguna Beachside and Skypark. 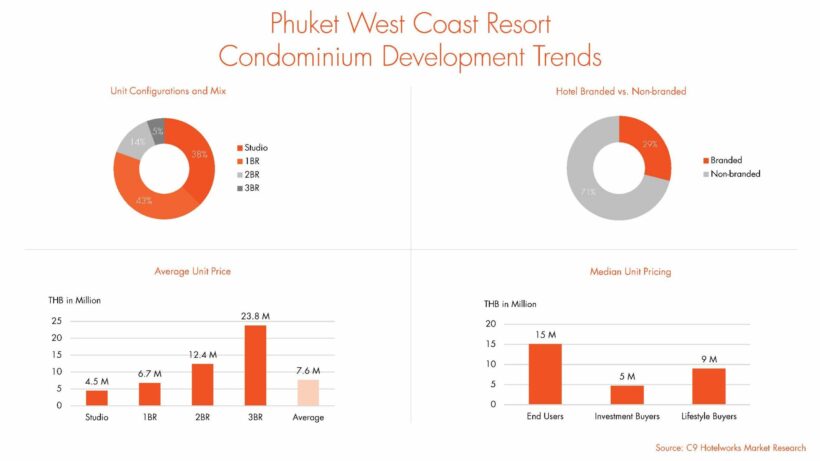 Taking a step back to access the longer-term growth of Phuket prime West Coast real estate, clearly, there is a move inland as there are strong barriers to entry for oceanfront and seaview land. Micro areas are continuing to witness growth but as land prices appreciate, new areas heading both further inland and North will see more development.  A new set of international schools on the outskirts of Cherngtaly and retail lifestyle malls like the new Robinsons are setting the stage for urbanization and redevelopment of mid-rise buildings on main roads.

Speaking with Brennan Campbell, Chief Executive Officer of leading Thailand brokerage group FazWaz who says “the pandemic has disrupted the mass investment property trend and both domestic and macro-economic and political elements have been the trigger for higher levels of transaction activity and growth in property prices. We have never been this busy.”

Assessing market trends and data, C9 Hotelwork’s view of the West Coast property market remains favourable given the increasing numbers of end users and full-time and part-time residents. We have seen a shift in what was an overheated speculative marketplace into a more grounded and fundamentally sound island real estate sector. As the Thai baht is expected to breach the THB38 to USD1 rate in the fourth quarter of the year we expect strong inward levels of foreign investment and transaction activity.