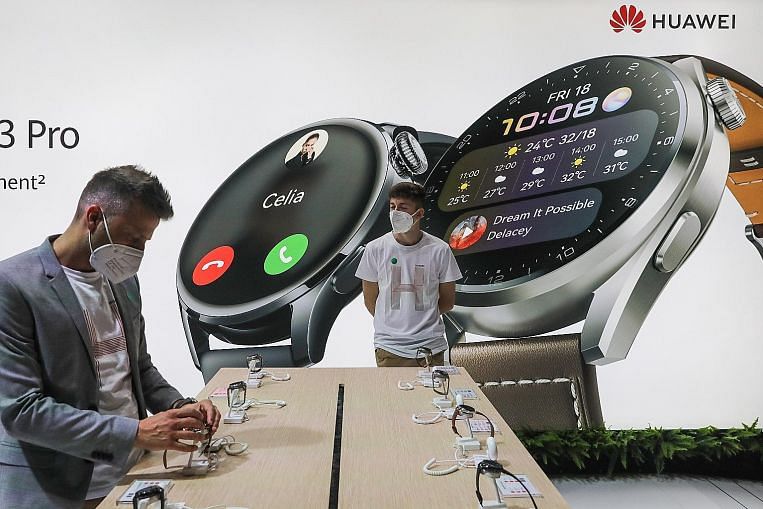 BARCELONA • Earphones embedded in pearl earrings, a smartwatch that measures body temperature, a diamond ring that monitors sleep patterns: The wearable gadgets market has boomed as the coronavirus pandemic boosts interest in health monitoring and working from home.

While worldwide sales of smartphones slumped last year, a record 527 million wearables were sold in the same year, up from 384 million in 2019, according to research firm Strategy Analytics.

It was the first time that global wearable sales topped half a billion and the trend is expected to continue, with the firm forecasting the devices will overtake smartphone sales by the end of the decade.

The surge in wearables sales was in focus at the four-day Mobile World Congress (MWC), the telecom industry’s biggest annual gathering, which wrapped up last Thursday in Barcelona.

Ear-worn devices like earbuds, which can be used to make calls and listen to music, accounted for nearly two-thirds of global wearable sales last year as people working from home upgraded their headphones for video calling.

Wristwear such as fitness trackers and smartwatches, which can monitor steps, the heart rate and even oxygen levels, accounted for 36 per cent of worldwide wearable sales, as people paid more attention to their health during the pandemic and exercise moved outdoors since gyms were closed in many places.

“Everybody is becoming much more health focused and wearables are a good device to assist with that,” said Mr Neil Mawston, an executive director at Strategy Analytics.

Chinese tech giant Huawei, for example, launched a new flagship smartwatch ahead of the congress which for the first time includes a high-precision sensor to detect skin temperature.

“We expect device makers to keep adding more sensors to devices,” said Mr Leo Gebbie, senior wearables analyst at consultancy CCS Insight, which expects 1.2 billion devices to be in use worldwide by the end of 2025.

“It will be interesting to see what else can be added to smartwatches because I think people will want to see more features,” he said.

While the wearables market is dominated by big firms such as Apple and Samsung, smaller companies that focus on specific markets are fuelling growth, said Mr Ramon Llamas, wearables research director at market research firm IDC.

Indian consumer electronics firm boAt, for example, has become the world’s fifth biggest wearables supplier by focusing solely on the domestic market with its budget wireless earbuds, he said.

But with companies releasing new devices at a faster rate, Mr Gebbie warned that there often appears to be little to distinguish them, especially at the lower end of the market where “wearable devices increasingly seem to be much of a muchness”.

Better design is also helping to boost the appeal of wearables. The tumbling size of components and batteries has made it possible to make smaller and sleeker wearables that often do not look like an electronic device.

German firm Nova, for example, displayed at the congress its wireless earphones which are embedded in clip-on pearl earrings that allow users to listen to music and make calls.

The device uses patented technology that can send sound from your earlobe directly to your ear canal without any sound leakage.

The device, which comes in different metals including a top-end diamond-studded one, caught the attention of major sports teams in the United States as well as Britain’s Prince Harry who has been spotted wearing it.

But Mr Gebbie of CCS Insight said consumers have got used to the look of wearables and the need for them to blend in has disappeared a bit.

“When smartwatches were still fairly new, there was a certain stigma around wearing one, it was seen maybe as a bit geeky or a bit nerdy. I think there has been a bit of a sea change in terms of how people feel about them,” he added.