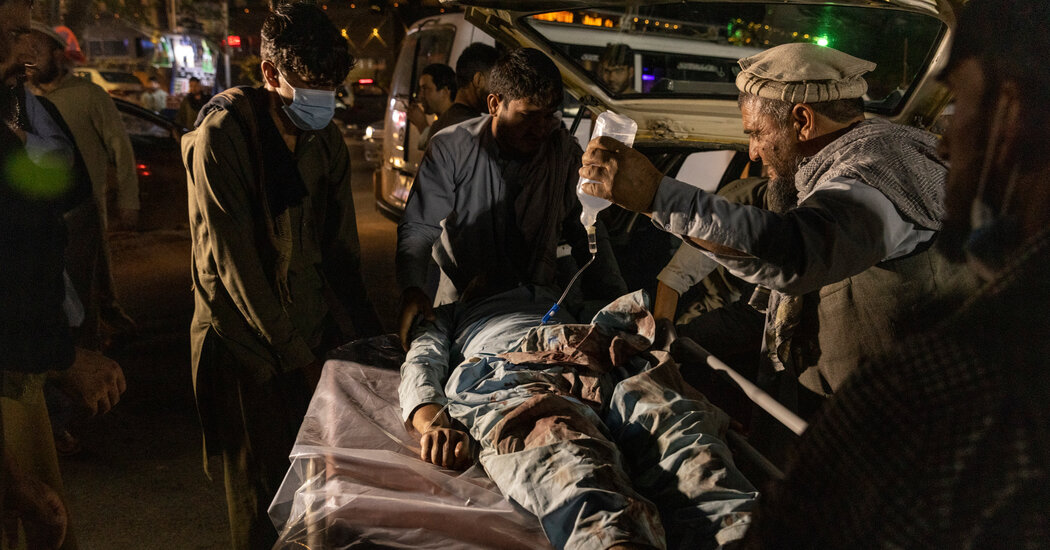 The time was set. At noon Thursday, Marines would swoop in and usher a group of 29 Afghans through Abbey Gate into Kabul Airport for evacuation. With minutes to spare, Ahmad — the leader of the group — was still looking for N., an Afghan man he’d never met. N. had tried, unsuccessfully, to enter through another gate earlier in the day, and he was now hoping to make it in with Ahmad’s group. The Marines would open the gate only once, but luckily they were running behind — potentially giving N. the extra minutes he’d need to find Ahmad in the heaving crowd outside it. I was on the phone with Ahmad. A colleague in another country was texting with N., and we were trying to connect them. Time was running out at the airport gates.

For the past two weeks, I’ve worked alongside an ad hoc group of veterans, journalists and activists with connections to Afghanistan who are trying to coordinate the evacuation of not just our Afghan friends but also strangers, like Ahmad and N., whose lives are under imminent threat. Days and nights full of creating elaborate text chains, building rosters of evacuees and sharing satellite imagery of routes to the airport.

As a Marine, I fought in Iraq and Afghanistan and participated in Hurricane Katrina relief efforts. As a journalist, I covered the war in Syria. Never have I witnessed a greater, swifter collapse of competence than what I have seen with the U.S. evacuation of Afghanistan.

Central to President Biden’s campaign was a promise that the candidate understood, deeply and personally, two essential things: empathy and service. Events in Afghanistan this week indicate this promise was, at worst, false and, at best, limited. Events in Afghanistan illustrate what happens when there is a breakdown in empathy. Events at the airport — desperation, death — indicate the extreme chaos that ensues when the commander in chief doesn’t actually understand the value of service.

On Thursday, the president gave a speech in response to that day’s suicide attack at the airport that killed 13 U.S. service members and more than 150 Afghans. After asking for a moment of silence and invoking his son Beau’s service in Iraq, Mr. Biden showed no contrition for his administration’s policies, which have sentenced tens of thousands of our Afghan allies to life under the yoke of the Taliban. This is an oppressive, barbaric regime that has shown no respect for the rule of law, no respect for women’s rights. There is no Taliban 2.0.

But it’s not only Afghans for whom the Biden administration has shown a lack of empathy. It’s also America’s veterans. It shouldn’t fall to our service members to clean up the mess made by this catastrophic withdrawal. And yet it has. For years, veterans have been calling for the issuing of long-promised visas for Afghan allies to be sped up. The calls only grew louder after Mr. Biden announced his withdrawal plan. In April, a chorus of veterans’ groups pleaded with the White House to begin a mass evacuation of Afghans. A bipartisan group of lawmakers sent a letter to the White House in June asking why the Pentagon had not been mobilized to protect Afghan allies, warning “the time is now.”

And yet Mr. Biden went ahead, over the pleas and against the advice of so many. The warnings came true. And because the administration provided no meaningful method for Afghans to leave, aside from a sclerotic special-visa application process, it has fallen to veterans and other civilians to try to save those who are desperately appealing for our help. Most of us, I believe, have done it out of a sense of duty and moral obligation, and as a last-ditch effort to uphold the promises we made to our Afghan friends. While there have been some success stories in this “digital Dunkirk,” as the former C.I.A. analyst Matt Zeller called it, there have been far more failures, near misses and desperate hopes dashed after hours and days of waiting in fear.

What is the value of service? How can the Biden administration claim to know, when it seems so willing to squander that value in pursuit of ill-laid plans? Apologists for the policies that brought us here claim that the catastrophic withdrawal was inevitable, that no degree of planning could have avoided this. That’s absurd. You need only look at a map to understand the inherent challenges in withdrawing from Afghanistan. Unlike Vietnam, which has hundreds of miles of coastline, Afghanistan is landlocked. The only way in or out is by air. So why were our U.S.-owned air bases shut down before an evacuation was complete? And that’s to say nothing of setting an arbitrary timeline of Sept. 11, 2021, for the complete troop withdrawal and then moving the timeline up to Aug. 31, 2021. If our back is up against a wall, it is a wall we built.

When the president spoke on Thursday night after the attack on Abbey Gate, he nodded at sacrifice. That’s fine, but it’s not what matters. What matters is to truly understand the value of service. If you do, you don’t send troops to die on a poorly planned and poorly executed mission. Failing to understand the value of service results in incompetence. And incompetence costs lives.

Which brings me back to Thursday, at Abbey Gate. The Marines were late because they were overwhelmed with other rescue attempts. Ahmad and N. were desperate to get in the gate. Shortly after 4 p.m. local time, a sergeant I’d been coordinating with appeared on the chain of text messages. He explained that all of his teams were tasked out on other missions. I asked if he could still rescue the Afghans we had waiting; he said he’d come himself. Immediately.

Then the chat went silent. For nearly an hour, there was no news of Ahmad, N., or the sergeant.

Finally I received a message from Ahmad: Hi

Are you in the airport? I asked.

A suicide bomber detonated himself at Abbey Gate 20 minutes later. Another hour passed. Then the sergeant texted me: He was OK. But N. hadn’t made it in, we soon learned. N. had survived the blast, but he was trapped on the other side of the gate.