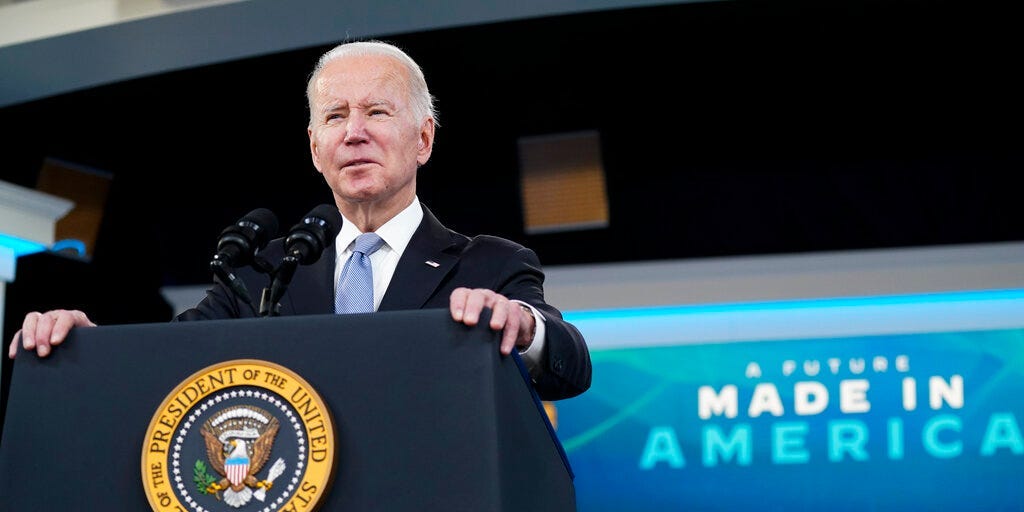 President Joe Biden has repeatedly cheered how the US is “the only nation that has turned every crisis we ever faced into an opportunity.”

He said it during his first formal State of the Union address on March 2. He used the same remark when he unveiled plans to lower gas prices on March 31. The clause reappeared on Tuesday as Biden cheered his $1 trillion infrastructure plan in New Hampshire, adding it describes “the history of the journey of this country.”

In many ways, the remark fits the zeitgeist. The economy has recovered nearly all the jobs it lost at the start of the pandemic. Americans are spending the most they ever have. Wages are rising at an extraordinary pace.

But look to some past crises and Biden’s promising message falls apart. The remark ignores the many US crises that didn’t end in opportunity and instead created new challenges. It also disregards the transcendent rebounds seen in several other countries.

The US has a history of staging strong recoveries, but it’s not perfect and it’s far from the only one to do so.

Not all US crises gave way to opportunity

As far as crisis track records go, America’s is strong. The Great


gave way to the New Deal. World War II paved the way for one of the greatest economic expansions in US history. The inflation woes of the 1970s and early 1980s led to the economic boom under President Ronald Reagan.

Other crises, however, have ended with little in the form of fresh opportunity. The country’s escalating involvement in the Vietnam War proved broadly detrimental, with nearly 60,000 US service members killed or missing in action. The peace treaty that led to the US’s exit was almost immediately ignored, and full-scale fighting quickly resumed. The last Americans in Saigon were airlifted out of the city as it fell to communist forces.

The conflict is widely regarded as one of the biggest military blunders in US history. It also coined the phrase “Vietnam Syndrome,” which is still used to describe the American public’s aversion to military intervention abroad. Not only did the war’s conclusion yield little opportunity, it left the US with tens of thousands dead, its international reputation tarnished, and eroded trust in the federal government.

The aftermath of the 9/11 attacks was similarly devoid of fresh opportunity. While optimists may point to a renewed sense of unity immediately after the attacks, 9/11 also revealed and stoked intense Islamophobia around the country. Mosques were destroyed and Muslims were harassed, threatened, and even attacked in the months after the attacks, according to a roundup from the Southern Poverty Law Center.

The attacks also sparked the War on Terror that’s since been criticized as unnecessarily long, poorly planned, and a major factor in the formation of ISIS. The invasion of Iraq specifically has come under scrutiny for destabilizing the Middle East and sparking the US military’s decades-long presence in the region. The US’s occupation of Afghanistan also soured, with forces staying in the country for 21 years and the Taliban taking control of the government as soon as American troops left.

Even the US’s economic-recovery record is far from perfect. The rebound after the 2008 financial crisis featured a bevy of missteps, from insufficient aid for state and local governments to

rate hikes that prematurely slowed the labor market’s recovery. While lessons learned from the Great

have been critical to powering the current recovery, they also detail how unnecessary the plodding recovery of the 2010s was, particularly for low- and middle-income Americans hit hardest by the housing crisis.

Among the most transcendent were those that came after World War II. England quickly rebuilt in the wake of mass bombing during the conflict. Reconstruction of the country’s capital began immediately after the war ended, and the following years saw the government invest heavily in building new homes, improving services, and developing localities outside London. The UK introduced free healthcare and massively improved public education over the postwar period.

Japan exhibited an even bigger turnaround. The Allied air campaign that culminated in the dropping of nuclear bombs on Hiroshima and Nagasaki devastated the country, but the following years saw an extraordinary recovery shape Japan into the world’s third-largest economy after the US and the Soviet Union.

The government shifted its economic focus to the production of raw materials like cotton and steel, which saw huge demand as other countries involved in the war pursued their own recoveries. Japan also adopted stringent recruitment measures that boosted female employment and further accelerated the country’s growth. The rebound through the late 1940s and 1950s laid the foundation for Japan’s role as a modern industrial superpower.

South Korea’s ascent to economic prosperity offers a more recent example. The country’s economy was hammered by the 1997 Asian financial crisis, with gross domestic product shrinking by 5.7% through the following year.

Yet South Korea’s shift toward high-technology manufacturing — which began in the early 1990s — powered a stellar rebound throughout the 2000s. Exports of computer chips surged while the country’s automotive and shipbuilding industries remained strong. The aftermath of the late-1990s crisis spurred an economic transformation that, in the span of just a few decades, has rapidly elevated South Korea’s trade power.

The US has repeatedly shown it can bounce back from a crisis stronger than it was. But it’s far from the only country to do so, and other nations’ rebounds offer similarly valuable lessons in turning downturns into opportunities.