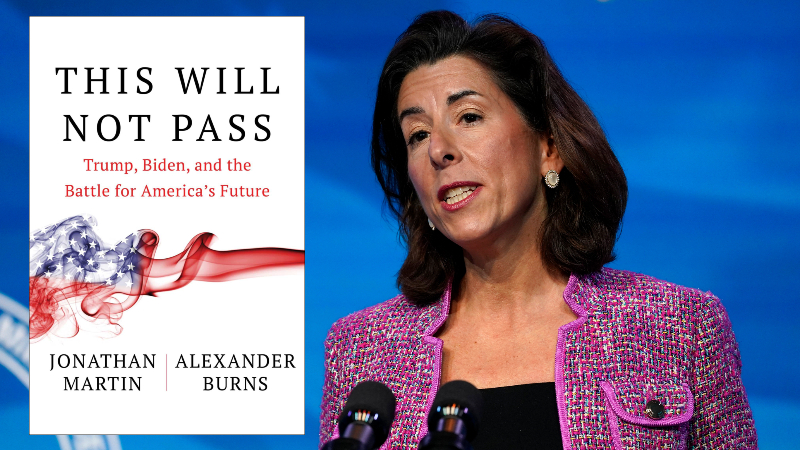 PROVIDENCE, R.I. (WPRI) — Then-Gov. Gina Raimondo privately suggested that Joe Biden should quit the Democratic presidential primary in February 2020 in order to clear a path for rival Michael Bloomberg, according to a highly anticipated new book.

Raimondo delivered the “startling entreaty” to a Biden ally while attending a gathering of governors that month, according to “This Will Not Pass,” by veteran political journalists Jonathan Martin and Alexander Burns. By staying on stage in the TV debates, she argued, Biden was hampering Bloomberg’s ability to wrest the nomination from Bernie Sanders.

12 News obtained an advance copy of the book, which comes out on Tuesday and is currently the No. 3 bestseller on Amazon.com. It has already ignited controversy in Washington after Martin and Burns revealed an audio recording of House Republican leader Kevin McCarthy from the days after the Jan. 6 attack in which McCarthy suggested President Trump should resign.

The two journalists’ assessment of present-day American politics is bracing. They describe “This Will Not Pass” as an account of “a political emergency in the United States,” and say the hundreds of interviews they conducted for the book raise questions about whether “the basic institutions of American government” can still function.

“Not since 1968 — a year of political assassinations and mass riots at home, and calamity on the battlefield abroad — has American democracy endured such a period of crisis,” they write in the book’s introduction.

The anecdote about Raimondo resurrects an episode in her political life that Biden’s future commerce secretary would likely prefer to have forgotten: her high-profile endorsement of Bloomberg’s doomed candidacy late in the 2020 primary cycle, at a time when Biden was struggling to consolidate support among moderate voters.

Martin and Burns, both currently at The New York Times, report that Raimondo “earned the lasting enmity of some Biden advisers” by backing Bloomberg, a longtime political ally of hers, and that it further diminished her chances of being selected as Biden’s running mate.

Raimondo “did not get close to joining the ticket,” the book reports, mainly due to her hostile relationship with some local labor unions and distrust of her among national progressive groups.

“To choose her would have provoked a revolt in the house of labor, and that was a risk Biden and his advisers were not prepared to take,” they write.

Still, the pair confirm previous reports that Raimondo was “an early standout” in the interviews for vice president, making a particularly strong impression on Cynthia Hogan, who was Biden’s legal counsel in the vice president’s office and served on the vetting team.

Another member of the search committee, Los Angeles Mayor Eric Garcetti, at one point even suggested that Raimondo was the closest thing to picking “a female Joe Biden” for the ticket. But Biden rejected the comparison, contrasting Raimondo’s Ivy League pedigree with his own more humble credentials as a University of Delaware graduate.

“We’re not all that alike,” Biden said of Raimondo, according to the book.

“This Will Not Pass” also sheds new light on what was happening behind the scenes in the weeks after Biden won the election, when Raimondo’s name repeatedly surfaced in speculation about potential cabinet appointees.

She largely refused to answer Rhode Island reporters’ questions about the process at the time, with one notable exception: on Dec. 3, she publicly ruled out leaving her job to become health and human services secretary after 12 News and other outlets reported she was under serious consideration.

The book confirms Raimondo was a top contender for the health post, but that she “saw her prospects fade as labor unions with whom she clashed at the state level mobilized against her, and concern mounted about diversity in Biden’s appointments.”

Martin and Burns write that after Raimondo withdrew her name from consideration, she texted a political ally: “I’ve always hated D.C.”

Biden announced Raimondo as his pick for commerce secretary a month later, setting in motion her resignation as Rhode Island governor and fellow Democrat Dan McKee’s elevation to the job.

As a cabinet member, “Gina Raimondo was one of the few prominent figures in Biden’s administration who never deviated from selling his domestic agenda,” according to the book, which notes she wasn’t involved in the disastrous withdrawal from Afghanistan and has a broad portfolio on economic matters at the Commerce Department.

Lobbying two prominent fellow centrists on behalf of Biden’s Build Back Better bill — West Virginia U.S. Sen. Joe Manchin and New Jersey Congressman Josh Gottheimer — Raimondo suggested to both that they should back the legislation even if they eventually wound up losing their re-election races for doing so, according to the book.

Martin and Burns also recount a personal moment between Biden and Raimondo during the Afghanistan pullout, arguably the lowest moment of the president’s tenure so far.

Returning dejected from Dover Air Force Base after meeting with families of American soldiers killed at the Kabul airport, Biden went alone to Holy Trinity Catholic Church to attend Mass. Raimondo was sitting in the next pew over with her daughter, Ceci, and invited Biden to sit with them.

During the sign of peace, the president turned to Raimondo and said, “Thanks for being a good friend.”

Apart from Raimondo, the only other prominent Rhode Island politician who appears in “This Will Not Pass” is Democratic Congressman David Cicilline. Martin and Burns recount the story of how Cicilline and his House Judiciary Committee colleague Ted Lieu began drafting articles of impeachment against Trump while they were still locked down in Cicilline’s office during the Jan. 6 attack.

Ted Nesi (tnesi@wpri.com) is a Target 12 investigative reporter and 12 News politics/business editor. He co-hosts Newsmakers and writes Nesi’s Notes on Saturdays. Connect with him on Twitter and Facebook