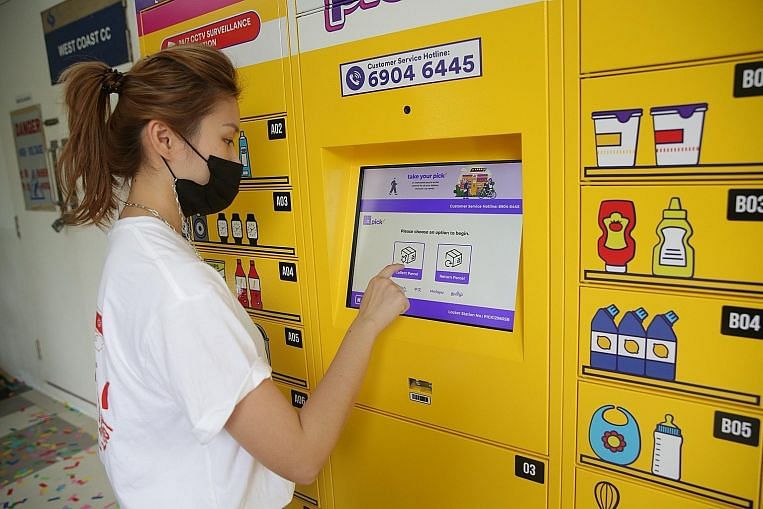 Consumers can now pick up online purchases near their homes at their own convenience via a nationwide parcel delivery locker network launched yesterday.

For a start, more than 200 lockers have been deployed islandwide in Housing Board estates, transport hubs and community centres (CCs) in areas such as West Coast, Jurong, Yishun, Geylang, Ang Mo Kio, Toa Payoh, Bedok, Pasir Ris and Tampines.

By the end of the year, the government-owned locker network will have about 1,000 lockers.

The locker network is deployed, owned and operated by Pick Network, a wholly owned subsidiary of the Infocomm Media Development Authority, which regulates Singapore’s postal services.

Under the plan, lockers should be located within a five-minute walk of the 10,000 HDB blocks here.

With such a system, consumers do not need to worry about missing parcel deliveries and having to wait in their homes to receive them.

Instead, they can collect parcels from the lockers at any time.

Speaking at the Pick locker network launch at West Coast Community Centre yesterday, Minister for Communications and Information S. Iswaran said that with Covid-19, more businesses and consumers are going digital than ever before.

“There is greater impetus to put in place extensive last-mile delivery infrastructure to better serve the needs of the public, whilst helping our logistics service providers achieve higher productivity and stay sustainable amidst this e-commerce boom,” he said.

The Government said in March that the locker network is expected to reduce the distance travelled for deliveries by 44 per cent daily, which could help cut carbon emissions from transport.

Trials of the lockers have shown that logistics service providers can improve their delivery efficiency by four times as the lockers offer a more centralised drop-off point for deliveries. This allows providers to complete more deliveries as well as lower operational costs.

Pick Network charges service providers a fee – which has not been disclosed – to use its lockers.

Addressing concerns that this could result in consumers paying more, Senior Minister of State for Communications and Information Sim Ann said yesterday that the locker system is expected to help logistics service providers improve productivity.

“We believe that this is very critical to maintaining costs at an affordable level, and, hopefully, also results in cost savings that consumers can also enjoy,” she said.

A Pick locker station usually has between 40 and 50 lockers in six sizes, from extra small, which can contain a shoe box, to extra large, which can hold a 21-inch medium-sized suitcase or a luggage bag.

Pick is working with e-commerce marketplace Qoo10 to let its customers collect their online purchases from the lockers. It is also working with online shopping platforms Lazada and Shopee to allow their customers to use the service by the middle of the year.

For things bought on other shopping sites that do not support Pick, logistics service providers may still ask consumers if they would like to collect their purchases via Pick.

Yesterday, Pick said it is partnering eight providers – FedEx, Huper Express, Qxpress, S.F. International, UPS, WMG, XDel and ZTO – on parcel collection. In the coming weeks, other providers will come on board.

Pick’s eventual tally of 1,000 lockers dwarfs those of private sector players, which operate about 100 to 300 lockers each.

Mr Meredith Poh, 26, who works in the furniture line, believes that the Pick lockers could offer convenience to consumers.

“It solves problems for shoppers and deliverymen,” said Mr Poh, pointing to how the lockers address the issue of not having anyone at home to receive deliveries.

For details on the lockers’ location, visit www.picknetwork.com