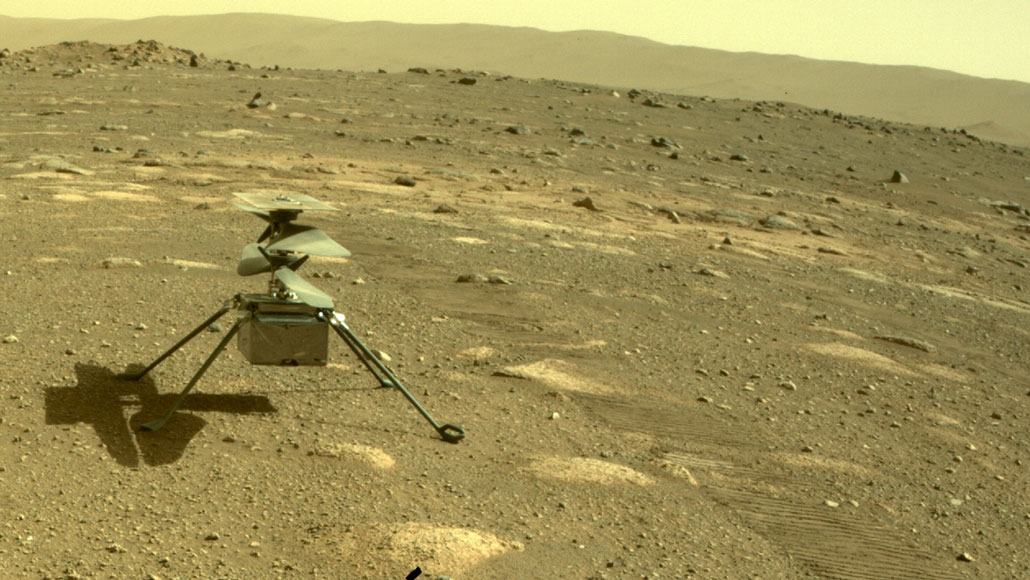 The Ingenuity helicopter proved it could fly on Mars. Now it has loftier goals. Having passed all its original engineering tests, the tiny spacecraft will now begin a new job, supporting the Perseverance rover in its science mission.

The helicopter arrived at Mars with two main goals: demonstrate that flight was possible on the Red Planet and show that it could return critical flight data to Earth. Those were both achieved in Ingenuity’s first flight on April 19 and then surpassed as the helicopter flew farther, higher and faster on April 22 and April 25 (SN: 4/19/21).

The original plan was for Ingenuity to take up to six flights total, then ground itself forever as Perseverance drove away to do science. That was partly because the Perseverance team expected to drive far from the rover’s landing site in search of rocks that might preserve signs of past Martian life (SN: 2/22/21).

Headlines and summaries of the latest Science News articles, delivered to your inbox

“We thought we would be doing an intensive drive campaign in which the helicopter would not be able to keep up,” said Perseverance project scientist Ken Farley of Caltech in the briefing. “But based on the rocks we have seen in the area, we really wish to spend a considerable amount of time where we are.”

Ingenuity has also been performing surprisingly well, Aung said. The rover and the helicopter might be able to communicate from more than a kilometer apart, giving them both more flexibility.

Ingenuity took its fourth flight on April 30 to scout for a new launch pad. The fifth flight, to be scheduled after the team has examined the data, will be a one-way journey to that new home.

After that, Ingenuity will switch into support mode. Up until now, the Perseverance team has generously supported the helicopter, Aung said. “The rover is primary going forward,” she said.

The helicopter will have future flights in support mode. The team says Ingenuity will scout potential scientific observations and rover routes from the sky, make 3-D digital elevation maps and take a look at places a rover can’t go. “The lessons learned from that exercise will benefit future missions with aerial platforms tremendously,” Aung said.

The team isn’t sure how the helicopter’s mission will end. Ingenuity was designed to last just 30 Martian days. The new support phase will extend its mission by another 30 days, unless something goes wrong before then. “We don’t know how many freeze and thaw cycles it can go through before something breaks,” said Ingenuity chief engineer Bob Balaram.