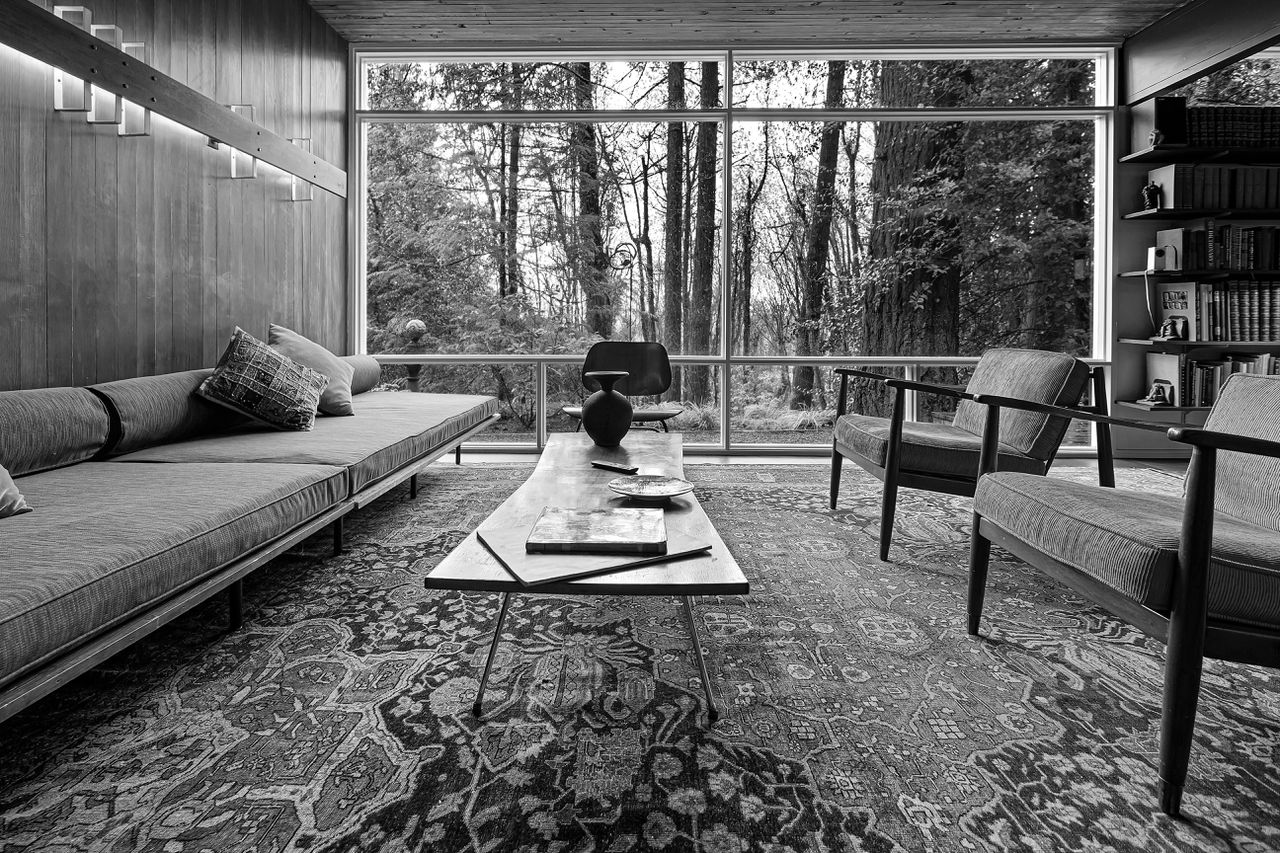 Before architect William Fletcher was celebrated as one of Portland’s most influential midcentury modern designers, he and his then wife, Joyce, moved into Fletcher’s first creation: A revolutionary looking, almost transparent dwelling built in 1954 on two forested acres near the Willamette River.

After 68 years, the family home is for sale for the first time: 10803 S. Riverside Drive in Riverdale, between Portland and Lake Oswego, was listed on April 25 at $1,250,000 by Lance George Marrs of Portland Modern Real Estate.

Marrs rightfully refers to the residence as an architectural gem.

Fletcher family members say Joyce, a photographer and painter, selected the location and William (“Bill”) designed the open floor plan with floor-to-ceiling windows that dissolve the boundaries between inside and out.

Soon, the avant-garde two-story with cork floors and planked ceilings was showcased in The Oregonian and national publications as well as the 1959 book, “The Second Treasury of Contemporary Houses.”

“Midcentury modern enthusiasts will be attracted to this home and acreage,” says Marrs, which he adds is “on a short list of properties genuinely coveted in the Northwest modernism designed by William Fletcher.”

But architectural experts say his work is timeless due to its graceful geometric forms, highly livable layouts and carefully positioned windows and skylights that draw in natural light.

Here, clerestory windows add to the sense of lightness, as if elements are floating. The house with 2,298 square feet of living space also has a long, concrete fireplace hearth in the living room and three bedrooms and two bathrooms.

With a degree from the University of Oregon’s School of Architecture, Fletcher first set up shop in the basement of his home in 1955.

A year later, he shared a downtown studio at Southwest 14th Avenue and Columbia Street with architects Donald Blair and Saul Zaik as well as other members of the fabled “14th Street Gang” of outliers designing intentionally pared-down buildings in the Pacific Northwest.

In 1956, Fletcher partnered with Dale Farr and Hal Ayotte to launch what is now FFA Architecture and Interiors, Inc. The Portland-based firm continues to design sustainable residential and commercial projects.

Early commercial projects include Black Butte Ranch residential resort near Sisters and Rex Hill winery in Newberg, where Fletcher famously dedicated a space for a steel sculpture by Lee Kelly.

The 1959 Wedgwood Home of Tomorrow that Fletcher conceived with Blair in Northeast Portland’s Hazelwood neighborhood was used as a film location for “Shrill,” a comedy series starring Aidy Bryant and streaming on Hulu.

The experimental model home, with an incredibly lightweight folded-plate roof, prefabricated panels and suspended fireplace, earned a merit award from the American Institute of Architects during the halcyon days of midcentury architecture.

Restore Oregon’s first book, “Oregon Made, A Tour of Regional Mid-Century Modern Architecture” ($35 at restoreoregon.org), includes a chapter on Fletcher’s talent at balancing the allure of transparent walls with the need for privacy.

Bill, whose friends said was a detailed-oriented, jazz drumming rebel, died in 1998. Joyce, a graduate of Cornell University in New York who traveled throughout her life to understand world cultures, died in January 2022.

More on the Portland and Oregon real estate market:

• Buying mansions in Boring, where there’s ‘more bang for the buck’

• Two Pearl District townhouses in former train station are for sale, starting at $1,575,000

• Portland’s huge mansions for sale: What kind of homes with space can you get for $8 million or less?