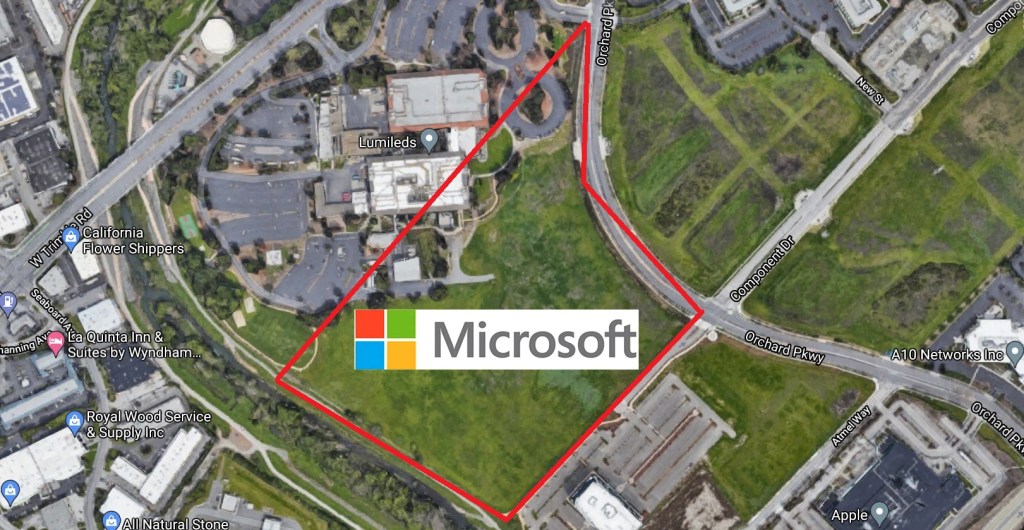 SAN JOSE — Microsoft, in an unexpected move, has bought a huge chunk of north San Jose land that is part of a site where a big mixed-use village has been proposed.

The tech titan bought just under 31 acres near the corner of Orchard Parkway and Component Drive, according to property records filed on May 4.

Microsoft paid $78.7 million for 30.7 acres that include vacant land and some buildings in north San Jose, the county records show.

This deal isn’t the first time Microsoft has bought a large swath of land in north San Jose.

In 2017, Microsoft paid $73.2 million for 65 acres near Alviso along the north side of State Route 237 between Zanker Road and the banks of the Coyote River. Microsoft wanted the land to build a data center to bolster its cloud services business.

The purchase of the land in the Alviso area in 2017 worked out to roughly $1.13 million an acre.

In the most recent Microsoft deal in north San Jose, the price works out to about $2.56 million an acre.

The Microsoft-bought land is next to the first phase of a site at the corner of West Trimble Road and Orchard Parkway where LBA Realty has proposed a mixed-use village of offices, hotel rooms, and retail uses.

Some uncertainty has arisen over these kinds of projects in the wake of the outbreak of the coronavirus, however.

The onset of the deadly bug has chased away business and leisure travelers, which has, in turn, gutted the hotel sector.

Tech companies exited many of their offices and are only gradually returning to their workplaces, which has raised questions about just how much office space they would need in the future.

In the wake of the sale of the land to Microsoft, LBA Realty retained an adjacent site that’s approved for the development of the first phase of the company’s village. The adjacent site is about 38.6 acres.

LBA’s latest proposal to the city of San Jose called for a development of 1.28 million square feet, which would occur on the site that the veteran developer still owns.