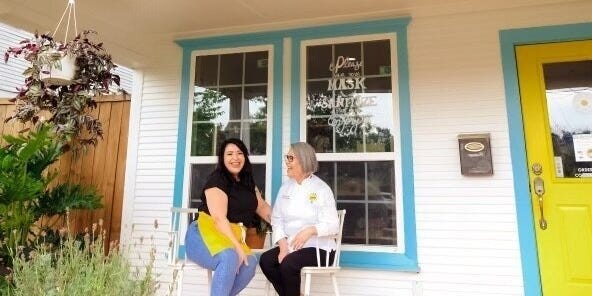 Cindy Pedraza knows firsthand how real-estate investors can change the makeup of a neighborhood.

The owner of Cocoandré Chocolatier— a family-run Mexican American chocolate shop in Dallas — has seen her community transform as developers move in, looking to invest in prime real estate.

Oak Cliff’s Bishop Arts neighborhood, where Pedraza set up shop, is a hop and skip away from downtown Dallas. The district is locally known as one of the most independent communities in the city and boasts a diverse and lively arts scene looking to rival larger hubs like Austin, Texas, and New York.

In recent years, the small neighborhood of artists and college students has become a hot spot for real-estate investment — and it’s throwing locals for a loop.

Since 2012, the Bishop Arts area has had almost 4,000 new apartments built, an annual report from February said. There are seven multifamily developments under construction, including a new project being led by the Lennar Multifamily Corporation.

The Charlotte, North Carolina-based real-estate developer plans to demolish the 500 block of 8th Street, replacing affordable, picturesque 20th-century complexes with 225 market-rate apartments — regardless of whether locals can afford them.

“There has to be a way to invest in the neighborhood without causing so much disruption,” Pedraza told Insider.

The nation’s hot housing market is pushing up property values across the country. Nationally, property taxes increased twice as fast in 2020 compared with 2019, jumping by 5.4%. In Bishop Arts, property taxes for one business reached as high as $700 a month. Businesses’ sales are also declining as priced-out locals seek out more affordable locations. It could be difficult in the metro area — in 2021, Dallas homeowners paid $5,817 in property taxes on average, compared with $3,785 nationwide.

For small businesses like Cocoandré Chocolatier, this could create a make-or-break situation.

“It’s been two years since the start of the pandemic, and we thought our business was finally getting to a better place,” Pedraza said. “But now there’s another thing that’s going to stop growth in the neighborhood and the local businesses that have been recovering.”

Lennar did not immediately respond to Insider’s request for comment.

‘It’s just been one thing after the other’

Before moving to 7th Street, Cocoandré Chocolatier had a home on Davis Street. Pedraza’s family rented the property, but a local developer bought it from underneath them.

Pedraza’s family owns her new property and developers can’t force them to leave, but she fears how the neighborhood’s transformation will affect her business in the long run — especially since it’s located directly behind Lennar’s 8th Street project.

Since the project kicked off, she said people have taken shelter in the soon-to-be-demolished homes on 8th Street. Pedraza said that last month a boarded-up apartment building behind her business caught fire.

“Every week, it’s just been one thing after the other,” Pedraza said. “Since that fire happened, there’s been fire trucks every weekend or all the time now in the alley, which makes us concerned about all the dirt and traffic. We experienced this once before when they were building apartments farther away, but these are now directly right behind us.”

Pedraza said real-estate construction has disrupted the lives of local homeowners and businesses. As developers move into a neighborhood, they come with “massive 18-wheelers, dust, road blockades, and noise pollution,” she said

“Unfortunately, none of the residents that exist have been contacted by the new company that owns the properties, and it hasn’t been communicated to us how they will work not to disrupt daily life,” she said.

‘You’ve got to take control of your own destiny’

Chad West, a Dallas councilman and mayor pro tem, said businesses and homeowners who are engaged in city meetings and planning are more likely to understand their rights and how to express concerns about aggressive developments.

“You’ve got to take control of your own destiny,” West told Insider. “If not, what happened in Bishop Arts could happen to your neighborhood.”

West said the train that led to 8th Street’s demolition left the station over a decade ago, when the City Council approved rezoning. In the years since, he said, Bishop Arts has fallen victim to investors “assembling properties,” when developers move into an area and purchase entire blocks.

“If neighbors who own their individual lots want to see their neighborhood stay single-family or want to add gentle density — which is like duplexes and granny flats — those are the kind of things you can put into planning documents for the future,” West said.

Although Pedraza said Dallas residents do need to start listening and learning, she believes it’s up to elected officials to make sure their interests are represented.

“I feel like it’s the city’s job to look out for residents and inform them on what is planned in their neighborhoods, especially in a way they understand,” she said. “We don’t see our leaders talking to us or including us in the conversation.”‘

To ensure residents are well-informed on housing decisions, West introduced the West Oak Cliff Area Planning effort, an initiative that aims to protect existing single-family neighborhoods, businesses, and affordable-housing choices. The effort involved a task force of local community leaders in 2020 and has begun community-engagement efforts, with the goal of full adoption by the end of 2022.

“We have to both protect everything we love about our neighborhoods and also plan for the future,” West said. “Dallas is growing rapidly, and if we as neighbors don’t take steps to preserve what we love and address growth and change in a meaningful, straightforward way, someone outside of our neighborhoods or even outside the city might do it for us.”

Pedraza feels Bishop Arts has already missed its chance but hopes the conversation will trigger meaningful change for other neighborhoods in Oak Cliff.

“I feel like it’s a little too late to do change here in the Bishop Arts area, but I think we can still cause some kind of change for the other neighborhoods in the area,” Pedraza said.

With more than 426,000 apartments slated to be completed around the country by the end of 2022, and the conversation around development bound to pick up steam, she might be right