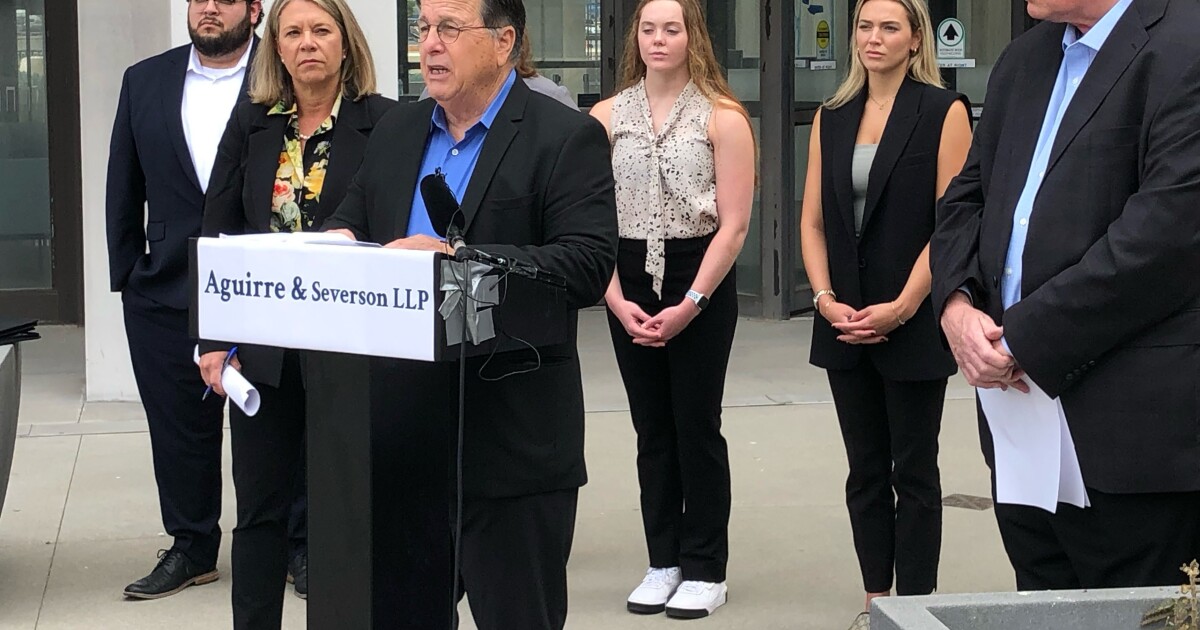 Attorneys suing the city of San Diego over its disputed lease for the vacant Ash Street high-rise said Thursday they would seek a temporary restraining order if the City Council agrees to a partial settlement proposed by Mayor Todd Gloria of two related lawsuits.

“This is so out of bounds, and so improper,” said Aguirre, who represents taxpayer John Gordon in his legal quest to void the Ash Street lease.

This story is for subscribers

We offer subscribers exclusive access to our best journalism.
Thank you for your support.

Severson, who was flanked by her law partner and their client, accused Gloria of misrepresenting multiple facts in his public statements about the proposed settlement.

The mayor’s office did not respond to questions about the attorneys’ intent to request a restraining order or what they said were misrepresentations by the mayor. Instead, an aide to Gloria issued a statement criticizing Aguirre‘s plan.

“What Mr. Aguirre is proposing will result in the continued waste of millions in taxpayers dollars on attorneys and attorney’s fees to litigate this matter for the next five to eight years,” Deputy Chief of Staff Nick Serrano said.

Gordon sued the city in 2020, contending that the council’s 2016 approval of the Ash Street lease violated the state constitution and must be voided. That case is scheduled for trial in January.

The city subsequently filed its own suits, alleging that the Ash Street lease and a similar deal for the nearby Civic Center Plaza violated state anti-corruption laws because a real estate broker advising the city had collected almost $10 million in fees from the two contracts.

Council President Sean Elo-Rivera and Councilman Chris Cate joined the mayor at a June 20 press conference to announce the deal, which calls for the city to buy out both the Ash Street and Civic Center Plaza leases for a combined $132 million.

The Ash Street building has been unsafe to occupy for all but a few weeks since the council approved the 20-year lease-to-own deal in 2016. It was appraised at $67 million at the time. The mayor’s staff acknowledged last month that it was now valued at “virtually zero.”

Gloria said the agreement, negotiated over 18 months, was the best path forward from a difficult situation. He said the settlement would provide legal certainty and allow the city flexibility in planning future real estate needs.

“Because there was no possibility of an ideal outcome from this civic debacle, our aim was to reach a lawful, fair settlement that limits the city’s liability and is in the best interest of taxpayers, which is what this settlement is,” the mayor said last month.

Elliott wrote an 11-page legal analysis noting that the deal settles claims against only Cisterra and CGA Capital, and wouldn’t resolve the litigation against real estate broker Jason Hughes and several contractors.

Elliott also objected to terms she said would allow Cisterra to keep its “ill-gotten gains” and to a separate provision that indemnifies both Cisterra and CGA Capital from future litigation costs related to the two leases.

“This office strongly recommends that the council reject the agreement,” Elliott concluded. “We encourage the council to review the agreement carefully and ask appropriate questions to city staff or to this office” before voting on the settlement.

On Thursday, Severson noted that although Gloria had said in June 2021 that he was committed to holding the “bad actors” accountable, the settlement plan he proposed last month pays Cisterra and CGA the full balance of the outstanding leases.
She also took issue with Gloria’s recent assessment that the settlement was in the best interests of the city and taxpayers, noting its $132 million cost and that a consultant had already said that needed repairs to the Ash Street building could cost $115 million more.

The settlement also fails to mitigate risks to taxpayers, Severson said, because it would indemnify Cisterra and CGA Capital from ongoing litigation and wouldn’t resolve the open lawsuits.

Aguirre complained that settlement language Gloria has used mischaracterizes the $7.5 million Cisterra agreed to return to the city as part of the agreement.

The amount of the proposed repayment comes from a closing statement provided by Cisterra, which also includes a reference to the $4.4 million paid to a “transaction consultant” — Hughes, the former city real estate adviser.

Aguirre said the city’s acceptance of that statement weakens its claim against Hughes because it implies the fee is permissible.

“That seems completely contradictory,” he said.

Hughes has denied any wrongdoing and said he told at least six San Diego city officials that he intended to seek compensation for his role in the real estate deals.

He also provided a statement to then-city real estate chief Cybele Thompson indicating that he intended to seek compensation for his work, and that Thompson accepted the information presented to her.

A hearing on those matters is scheduled for Sept. 30.