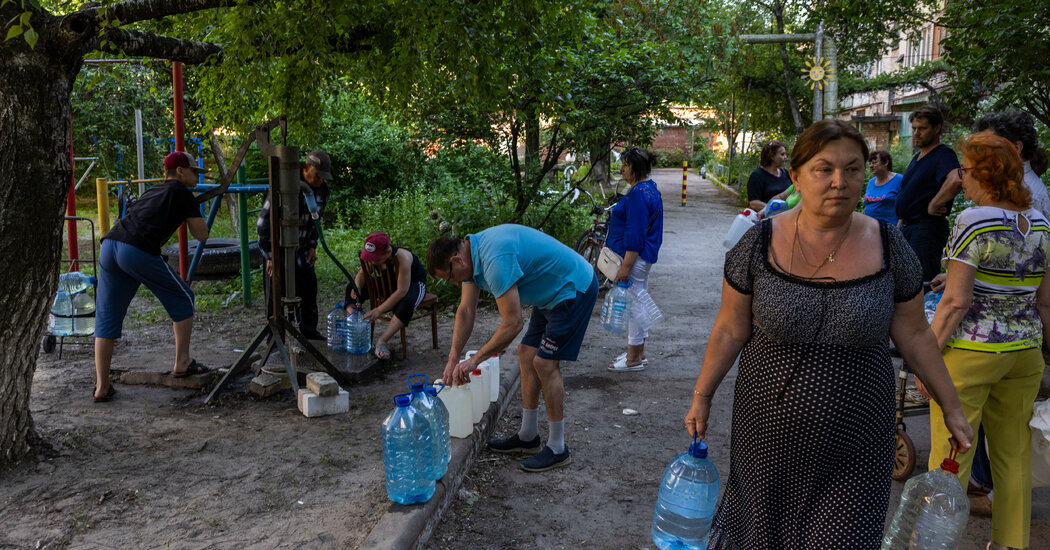 Far from Ukraine’s embattled eastern front, a new struggle is being waged — not from the trenches, but over leafy side streets and broad avenues. That is where the enemy goes by the name Pavlov. Or Tchaikovsky. Or Catherine the Great.

Across Ukraine, officials are starting projects to, as they say, “decolonize” their cities. Streets and subway stops whose names evoke the history of the Russian Empire or the Soviet Union are under scrutiny by a population eager to rid itself of traces of the nation that invaded in late February.

“We are defending our country, also on the cultural front lines,” said Andriy Moskalenko, the deputy mayor of Lviv and the head of a committee that has reviewed the names of each of the city’s more than 1,000 streets. “And we don’t want to have anything in common with the killers.”

Ukraine is far from the first country to undertake such a historical accounting — the United States has wrestled for decades with the renaming of Civil War-era monuments. Nor is it even the first time Ukraine has undertaken such an effort: After the fall of the Soviet Union, it was one of many Eastern European countries that renamed streets and removed statues commemorating an era of Communist rule that became synonymous with totalitarianism.

This time, the decision to erase Russian names is not just a symbol of defiance toward the invasion and Soviet history, said Vasyl Kmet, a historian at the Ivan Franko National University of Lviv. It is also about reasserting a Ukrainian identity that many feel has been repressed under centuries of domination by its more powerful neighbor, he said.

“The concept of decolonization is a little broader,” Mr. Kmet said. “Russian politics today is built on the propaganda of the so-called Russky mir — the Russian-speaking world. This is about creating a powerful alternative, a modern Ukrainian national discourse.”

The western city of Lviv is one of many areas undertaking “decolonization” campaigns. So, too, is the northwestern city of Lutsk, which plans to rename over 100 streets. In the southern port city of Odesa, whose inhabitants are mostly Russian-speaking, politicians are debating whether to remove a monument to Catherine the Great, the Russian empress who founded the city in 1794.

In Kyiv, the capital, the City Council is looking into renaming the Leo Tolstoy subway stop after Vasyl Stus, a Ukrainian poet and dissident. The “Minsk” stop — named after the capital of Belarus, which has stood by Moscow during the invasion — may soon be rechristened as “Warsaw,” honoring Poland’s support for Ukraine.

And it’s not only Russian names that are under scrutiny. The Lviv committee also plans to delete street names in tribute to some Ukrainians. One is named after the writer Petro Kozlaniuk, who collaborated with Soviet security agencies, including the K.G.B.

Removing the names of some cultural icons — which the Lviv committee said it did after consulting with academics from the relevant fields — has proved more divisive. The history of figures like Pyotr Tchaikovsky can be tricky: The classical composer’s family roots were in modern-day Ukraine, and some musicologists say his works were inspired by Ukrainian folk music.

A few miles from Lviv, Viktor Melnychuk owns a sign-making factory gearing up to make new plaques and posts for renamed streets. Although he acknowledges that he has a business interest in each change, he is ambivalent about some of the new names.

“Maybe we should keep some classic writers or poets if they are from other periods. I’m not sure,” he said. “We can’t reject everything completely. There was some good there.”

But he planned to stand by the committee’s decisions. And its ruling was unanimous: Tchaikovsky would go.

“When we rename a street, it doesn’t mean we are saying: ‘This person didn’t make this invention, or was not important,’” said Mr. Moskalenko, the deputy mayor of Lviv. “It means this person’s work has been used as a tool of colonization.”

Mr. Kmet, the historian, saw an opportunity to honor the contributions of some Ukrainians whose contributions have been lost to history. He is hoping to name one street in Lviv after an obscure librarian, Fedir Maksymenko, who he said secretly safeguarded Ukrainian culture and books during the Soviet era.

“I and Ukrainian culture owe a lot to him,” he said. “We must work very hard today to preserve what he saved.”

An earlier version of a picture caption with this article misidentified a location in Lviv, Ukraine. The picture was taken on Tomashivskoho Street, not on Tchaikovsky Street.