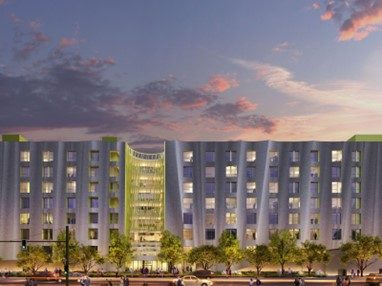 Jonathan Rose Cos., in partnership with Wakeland Housing and Development Corp., has started construction on a 137-unit fully affordable community in Los Angeles. The $74 million project, to take shape at 1999 W. Third St., is the company’s first ground-up development on the West Coast.

Benchmark Contractors will be the general contractor, while the design team consists of Brooks + Scarpa Architecture, Tina Chee Landscape Studio and Argento /Graham. Upon its estimated 2025 completion, the community will cater to residents earning between 30 and 80 percent of the area median income.

Designed to achieve LEED Gold certification, the 100,000-square-foot, seven-story building will encompass studio, one- and two-bedroom floorplans, according to Yardi Matrix information. Amenities are set to include a fitness room, a community lounge, a yoga studio, workspaces and barbeque areas, as well as 10,000 square feet of open space. Rose Community Management will serve as property manager.

The development site is just east of St. Vincent Medical Center, in a high-density residential area in the Westlake neighborhood. There are many dining options, entertainment venues, schools, retail and green spaces in the area, such as MacArthur Park and Vista Hermosa Natural Park. Metro B and D Lines are accessible at Westlake/MacArthur Park Metro station.

To date, Jonathan Rose Cos. has developed and preserved more than 18,000 units of affordable and mixed-income housing. The firm recently received a $25 million loan from EagleBank for the refinancing and pre-development of a 125-unit affordable housing project in Washington, D.C.