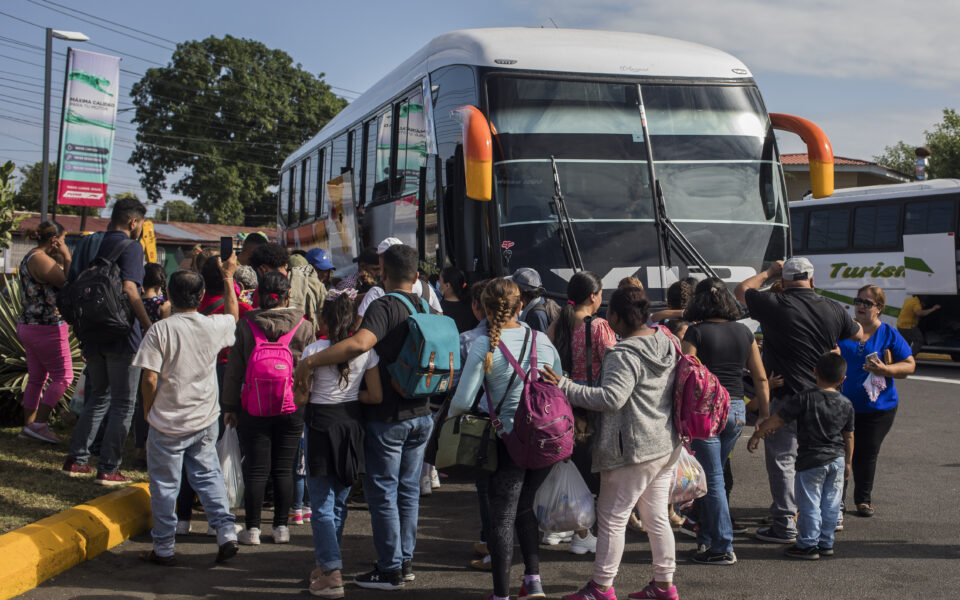 Twice a week at a gas station on the western edge of Nicaragua’s capital, local residents gather, carrying the telltale signs of people on the move: loaded backpacks, clothes and toiletries stuffed in plastic bags, and heavy jackets in preparation for a chilly journey far from the stifling heat.

Nurses, doctors, students, children, farmers and many other Nicaraguans say teary goodbyes as they await private charter buses for the first leg of an 1,800-mile journey. Final destination: the United States.

For generations, Nicaragua, the second poorest country in the Western Hemisphere after Haiti, saw only a trickle of its people migrate northward. But soaring inflation, declining wages and the erosion of democracy under an increasingly authoritarian government have drastically shifted the calculus.

Now, for the first time in Nicaragua’s history, the small nation of 6.5 million is a major contributor to the mass of people trekking to the U.S. southern border, having been displaced by violence, repression and poverty.

Attention has focused this year on the record numbers of Venezuelans and Cubans pouring into the United States, but this less-noted but remarkable surge of Nicaraguans is also adding to the migration crisis in a big way, sending money back to their families and, inadvertently, providing an economic lifeline to a government under sanctions from the United States.

More than 180,000 Nicaraguans crossed into the United States this year through the end of November — about 60 times as many as those who entered during the same period two years earlier, according to U.S. Customs and Border Protection data.

And while tens of thousands of people remain stuck in Mexico after the Supreme Court on Tuesday ruled to keep in place Title 42, the public health measure that allows the United States to turn back migrants arriving at the border, Nicaraguans can continue to enter the country, as they are largely excluded from the measure.

Tatiana González Chacón, 23, a baker, left the Bluefields region in eastern Nicaragua for Phoenix last month, because her father, the leader of an opposition party that saw its charter revoked, was accused of terrorism and had to flee to Costa Rica.

Nicaragua used to be “an enviable country, a place people wanted to go,” she said. “Now it’s a place where its own people want to get out. When you cross that river into the United States, it’s like you breathe a different air.”

Earlier this month, at a bus stop in Managua, the capital, a mother of three who asked not to be named was making the journey. The trip cost her $2,000, and she was still indebted to a smuggler for a previous failed attempt to reach the United States. Four brothers who recently inherited a farm for which the costs of seeds and fertilizers have quadrupled also boarded a bus heading north.

This year, for the first time, the number of arrests of migrants illegally crossing the U.S. southern border exceeded 2 million in a single year.

Last month alone, 34,000 of those migrants were Nicaraguans who turned themselves in to U.S. immigration authorities — five years ago, the number of Nicaraguans for the entire year was just over 1,000.

Migrants from Nicaragua have been largely exempt from Title 42 because the country does not allow deportation flights and Mexico has refused to accept migrants from there.

Another significant influx of Nicaraguans has also crossed into Costa Rica and, combined with those heading north, has resulted in about 10% of Nicaragua’s population leaving in the past four years, underscoring the widespread lack of faith in President Daniel Ortega’s government.

For decades, migrants from Mexico, El Salvador, Guatemala and Honduras were the dominant groups arriving at the U.S. border. Nicaragua’s government leaders often boasted that without the powerful gangs that terrorized surrounding countries, Nicaraguans felt relatively safe and did not need to flee.

The dynamic started shifting in 2018. Ortega, a former leftist revolutionary who led the nation during its civil war in the 1980s, won the presidency in 2006 after changes were made to the constitution to allow candidates to win without an absolute majority of votes.

Since then, he has been reelected three times, including last year, in a vote that much of the international community and many rights groups deemed a sham because of anti-democratic moves by Ortega and his wife, Rosario Murillo, who is his vice president.

The ruling couple has made institutional changes and reached deals with opponents that have allowed them to control the Supreme Court, the electoral commission and the National Assembly. They have bought television stations and made them more sympathetic to the government, while taking their critics off the air.

In 2018, protests erupted over changes to social security rules that would have required workers to pay more and retirees to receive less. But the demonstrations expanded to mass anti-government uprisings across the country that lasted months and led to several hundred deaths.

The government response was brutal. Furious over roadblocks that protesters had erected throughout Nicaragua, the government jailed opposition leaders and shut down political parties and civil society groups. Many political activists and journalists fled.

The exodus slowed during the pandemic but resumed again last year after Ortega stepped up his crackdown, closing research institutes, shuttering human rights organizations and arresting not just his political opponents but also their families on trumped-up charges, including of plotting a coup.

Before last year’s election, Ortega jailed seven presidential candidates and barred several opposition parties from participating. President Joe Biden blasted the election as “neither free nor fair, and most certainly not democratic.”

A spokesperson for the Nicaraguan government did not return several messages seeking comment.

“You eliminate the media, eliminate political parties, eliminate universities. Why do you think people are leaving?” said Manuel Orozco, a Nicaraguan analyst at Inter-American Dialogue, a Washington-based research institute.

Elvira Cuadra, a Nicaraguan sociologist, fled to Costa Rica four years ago after the government raided her political science institute and revoked its legal status.

“These are really not the usual economic migrants,” she said. “This is forced displacement.”

Since 2018, 154,000 Nicaraguans have sought asylum in Costa Rica, where the government recently announced changes to its asylum policies to curb their arrivals. Refugees must now apply for asylum within a month of arriving in the country, will no longer receive an expedited work permit and cannot leave Costa Rica while their applications are pending.

At the current rate, it will take Costa Rica 10 years to resolve all of the asylum claims, said Marlen Luna, the director general of Costa Rica’s immigration authority.

“This Nicaraguan immigration is historic,” she said. “This problem does not have a short-term solution. It is not a wave. It is not fad. This is permanent.”

Many Nicaraguans are also leaving because of increased economic hardship under Ortega’s rule.

Although the International Monetary Fund’s figures show about 25% of Nicaraguans live in poverty, analysts say the actual rate is likely far higher as some two-thirds of the nation live on about $120 a month.

“The only way you can find a job where you can earn an amount that’s not very good but a bit more comfortable is if you are allied with the government,” said Víctor Hernández, 29, who left the city of León in October and is living in Nashville, Tennessee, doing odd jobs. “I bought a small plot of land five years ago to build a house, and I haven’t been able to buy a single brick.”

Hernández worked in Nicaragua as a restaurant manager before becoming unemployed for a year. He finally found a new restaurant job making $250 a month, but it was not enough to support his two children, even though his wife also worked. He decided to leave his family behind, with the hopes of returning in a few years.

“The situation in Nicaragua is too ugly,” Hernández said.

The money that people like Hernández are sending home is helping to sustain Ortega’s government, which is under U.S. sanctions targeting people and businesses associated with the government. Nicaraguans sent $3 billion home in 2022, Orozco said, making remittances 17% of the country’s tax revenue.

“It’s a paradox,” said Alberto Cortés, a professor at the University of Costa Rica. “They have differences with the regime, and so by leaving they help maintain the regime. The government is fine with the departures of all these people.”

In a speech in October, Ortega laid the blame for the spike in migration on the U.S. government.

“It’s the country that has applied the most sanctions and therefore the most damage and more crisis, and then there they are complaining” about immigrants, Ortega said.

Across Nicaragua, however, Ortega’s criticisms of the United States mean little as people lose faith that the grim political and economic picture will improve anytime soon.

Hazel Martínez Hernández, 21, and her brother Julmer, 19, saw their father start looking much older than his 51 years as he rented a plot of land to grow produce and worked as a security guard. They wanted something better for themselves. The family took months to borrow $8,000 to pay a smuggler for the siblings’ trip from Santa Rosa, a border town near Honduras.

The family had to come up with another $10,000 in ransom when the siblings were kidnapped in Mexico.

Hazel Hernández, a college graduate, and her brother, once a farmer, now rent an apartment in California and are not working.

“We’ve seen those people who have left send money to build houses, and some returned and opened businesses, bought land and improved their lives,” said their sister, Jahoska, whose partner left last year and sends her money.

“So they want to do the same,” she added.

This article originally appeared in The New York Times.