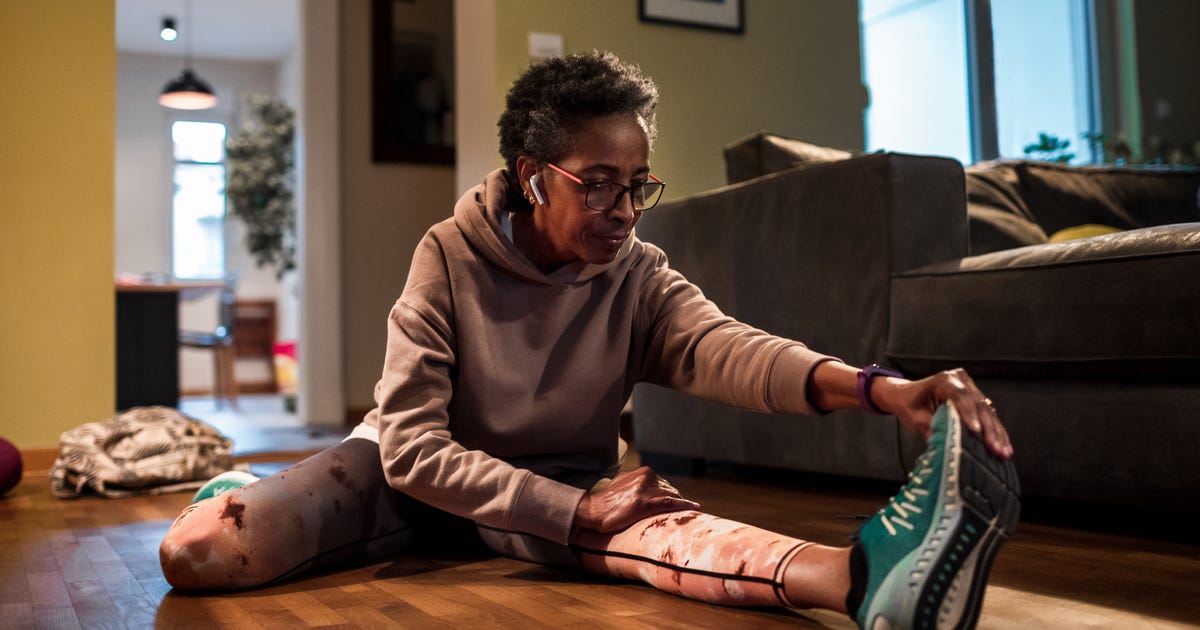 While antiquated devices meant for older adults may have fallen out of fashion, the need for new ways to stay healthy as you grow older is more “in” than ever. At CES 2023, companies added to a growing market of health tech that are attempting to make the business of growing old more seamless than ever.

As we age, we start to accumulate risks of underlying health conditions such as heart problems, certain eye diseases, hearing loss and more. They’re markers of time put in on this world, but they often require more health-tracking and metric-keeping, such as frequent blood pressure measurements or keeping tabs on daily medication regimens.

Historically, we’ve viewed wellness trackers in terms of their appeal to younger or middle-aged adults, with flashy interfaces and new apps competing for buyers’ attention. But as the tech world becomes more advanced, so are the people aging into it.

“The 50-plus age group is a much savvier group of people who are ready and willing and looking for — wanting — modern products to meet their needs,” said Rick Robinson, the vice president and general manager of the AARP’s AgeTech Collaborative.

2023 saw some big improvements in health tech that may positively affect the lives and health of older adults. One of the highlights was a new US Food and Drug Administration rule allowing hearing aids to be sold over the counter. This removes the prescription barrier for people with mild or moderate hearing loss, and chips away the cost in the process.

I’ve rounded up some of the tech devices for aging people, which we saw at CES 2023. These tools aim to make it easier to measure things like blood pressure and heart rate, and they ward off the negative health effects of social isolation. Rendever has a VR experience for older adults called Alcove. If it reaches enough homes, virtuality realities like it may stave off the harmful effects of social isolation.

Perhaps most exciting — at least for people who have to take their blood pressure every day or otherwise monitor their heart health — were the announcements of new, much easier ways to get those health metrics. Enter: a cuffless, finger-only blood pressure monitor and a toilet that monitors your blood pressure, blood oxygenation level and heart rate as you sit on it.

The Heart Seat, made by Casana and showcased by AARP at CES, is being reviewed by the FDA for clearance as a medical device. This means you’ll need a prescription for one. But if cleared, and installed in your home, it could make heart health monitoring for seniors and their caregivers that much easier, when all it requires is a 30-second sit to provide your health care team with important information. 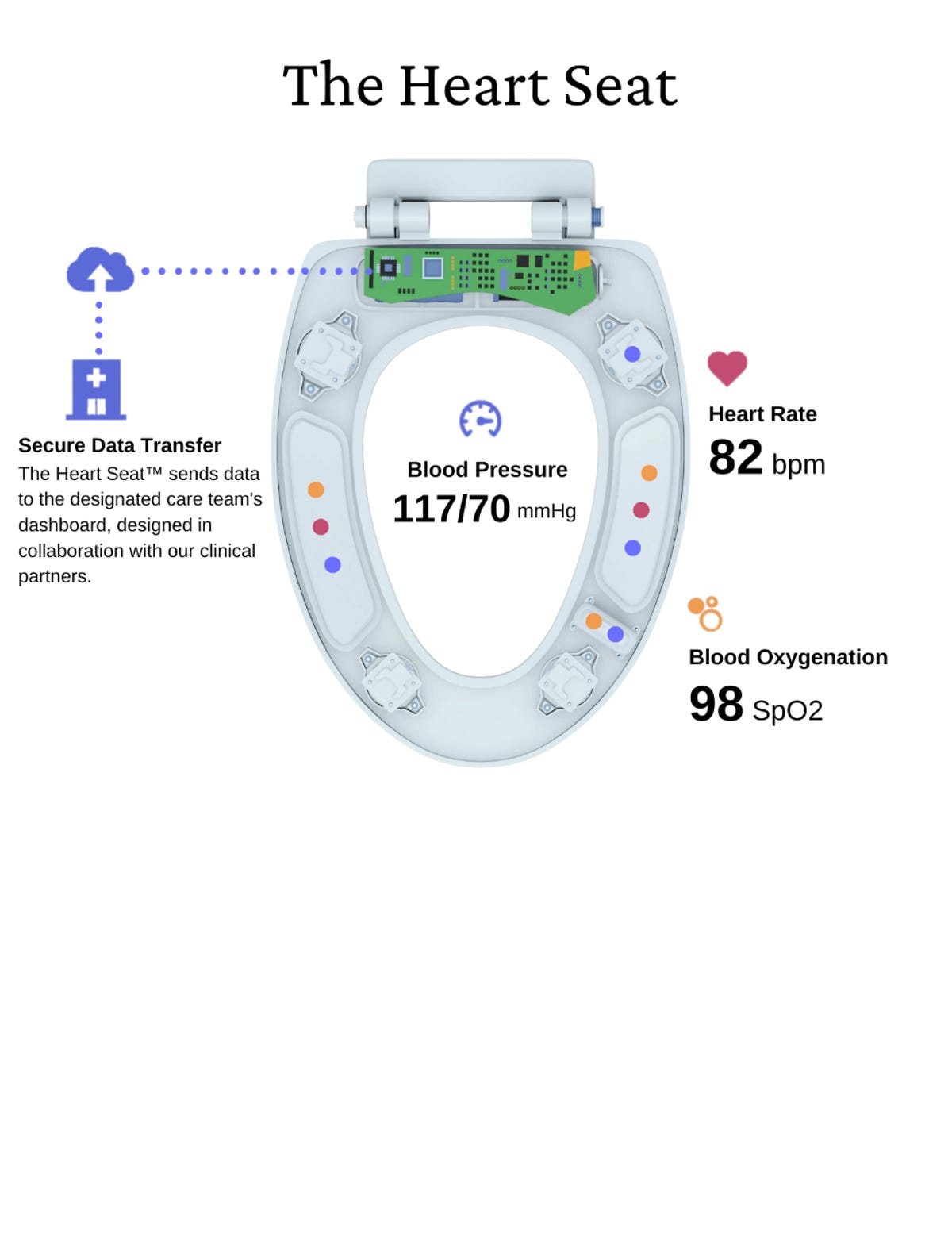 The new frontier of heart health tracking: the toilet seat.

Valencell’s finger-only blood pressure monitor, is also being reviewed by the FDA, but as an over-the-counter device with no prescription required. Traditionally, blood pressure monitors have required an arm squeeze and calibration to get your daily measurements. But sometime this year, Valencell’s could be on the market and mark an exciting advancement in home health care.

Read more: I Have High Hopes for This Cuffless Blood Pressure Monitor. Here’s Why

Electronic eyewear company eSight announced the eSight Go this year, a more robotic sunshade-looking pair of glasses designed for people with central vision and legal blindness. Macular degeneration, which is one of roughly 20 different eye conditions that would make someone a good candidate for these glasses, is often age related. Compared to the eSight 4, the eSight Go has improved features, the company says, and projects a better image onto its two high-resolution screens for “full binocular vision.” 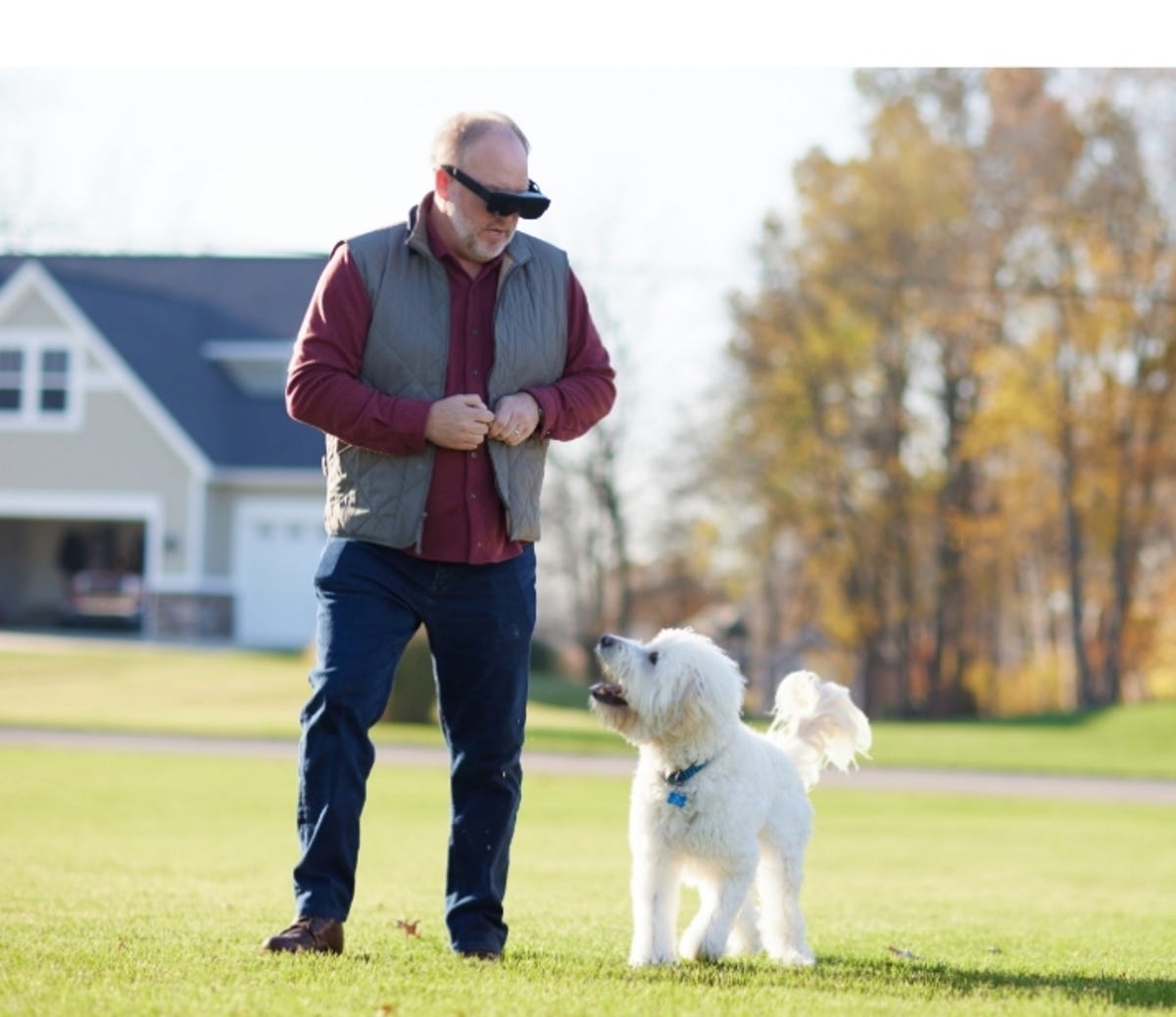 Coming fall of 2023, the eSight Go might be bulkier compared to a standard set of glasses, but they’re designed to help people with macular degeneration, cataracts, glaucoma, diabetic retinopathy and more.

This year’s CES was the first show since the US Food and Drug Administration’s new rule allowing hearing aids to be sold over the counter. While any adult with mild or moderate hearing loss may benefit from the new rule, aging is a big contributor to hearing loss, and about half of people have a hard time hearing once they surpass 75 years old. Hearing loss can contribute to cognitive decline, as well as other physical and mental health problems.

Eargo, a prolific name in the personal sound amplification and OTC hearing aid world, announced the Eargo 7, its latest model, at CES. The Eargo 7 will be the company’s third over-the-counter device; it comes with a new sound-adjust feature for better sound processing in loud environments, and it’ll improve noise performance overall in bustling environments like restaurants, the company said. 2023 is predicted to be a year we’ll see many more new hearing devices.

While some hearing health experts have welcomed the new FDA rule as an expansion in accessibility, not everyone is a good candidate for an OTC hearing aid. Read more about the pros and cons of over-the-counter hearing aids. 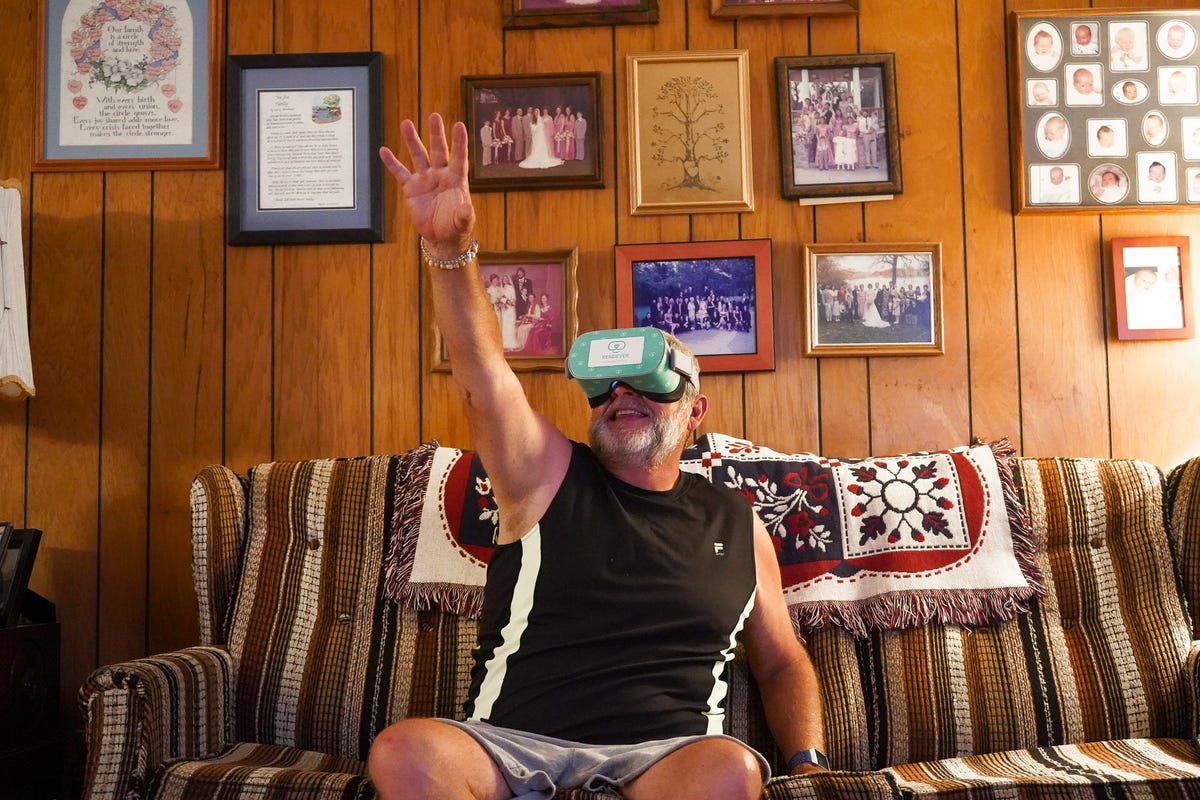 On par with the health risks stemming from smoking and physical inactivity, social isolation has been linked to negative health outcomes including heart disease, dementia and premature death, according to the US Centers for Disease Control and Prevention. Older adults are at particularly high risk, and about one-fourth of adults over age 65 are socially isolated. Factors that can increase social isolation may include living alone, loved ones passing away and hearing loss.

Rendever and the AARP have a virtual reality to help combat it. Rendever first unveiled its virtual reality for older adults in nursing homes at CES 2019, announced last week at CES its acquisition of the app Alcove. While Rendever has been working with the AARP on Alcove for a few years, the tech company’s takeover will allow the VR experience to move beyond the nursing homes it’s been previously focused in, hopefully reaching more homes of aging adults and their caregivers. (You can download Alcove through the Quest store.)

Robinson, who works with AARP’s Innovation Labs and new technologies in aging tech, said that many people who are socially isolated gradually start pulling away — for example, they stop having people over or stop leaving the house. For a person experiencing social isolation, VR has the ability to “draw them out.” Hopefully, new moves from Rendever will get those drawn-out experiences reaching more lives.

“It’s clear that the future of aging relies on purposeful technology,” Rendever cofounder Kyle Rand said in a press release. “A well-designed metaverse strengthens relationships, builds communities, and gives us the means to immerse ourselves in new experiences.”

The information contained in this article is for educational and informational purposes only and is not intended as health or medical advice. Always consult a physician or other qualified health provider regarding any questions you may have about a medical condition or health objectives.