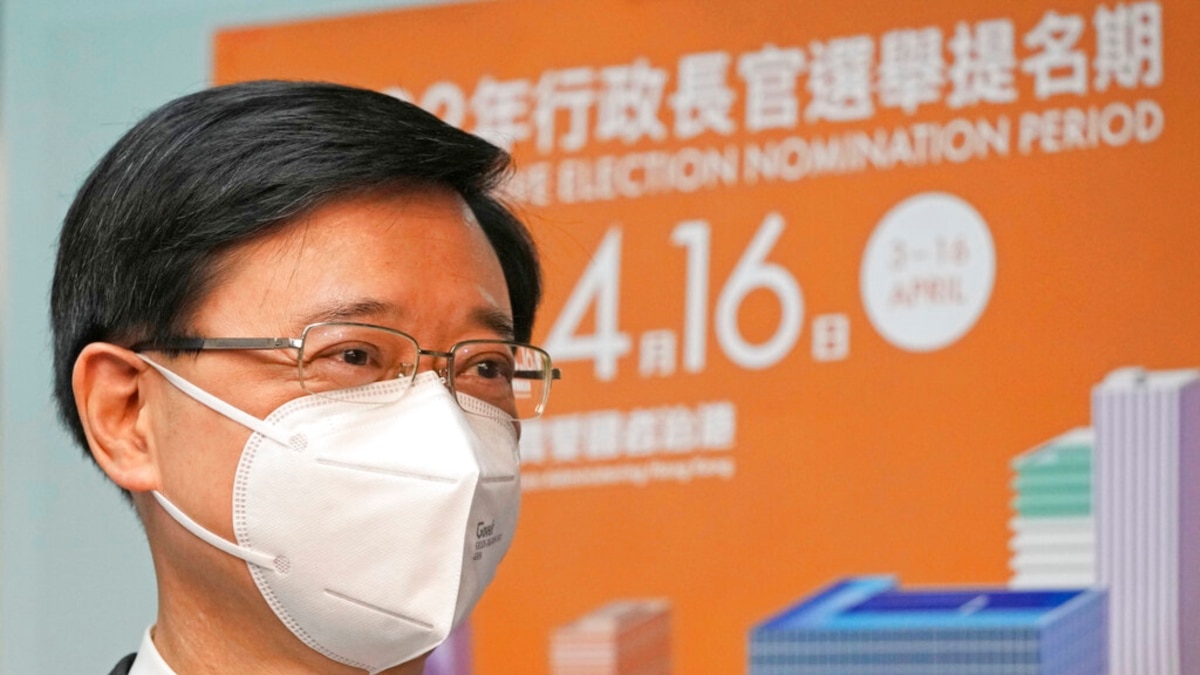 John Lee, the sole candidate to succeed Carrie Lam as chief executive of Hong Kong this summer, has had his campaign channel suspended from YouTube in what the company said was a necessary move to comply with U.S. sanctions.

According to a representative from Meta, the parent company of Facebook and Instagram, Lee was prevented from using “payments services” to comply with the U.S. law, but he can “maintain a demonetized presence” on those platforms.

“If we identify accounts maintained by or on behalf of people on the U.S. government’s list of specially designated nationals, we have a legal obligation to take certain action,” the representative said.

In August 2020, the U.S. Department of the Treasury sanctioned Lee and 10 other individuals including Lam for “undermining Hong Kong’s autonomy and restricting the freedom of expression or assembly” of the citizens of Hong Kong. Lee was Hong Kong Secretary of Security at the time.

On Thursday, Chinese foreign ministry spokesperson Wang Wenbin accused “certain U.S. companies” of serving as the U.S. government’s political tools to interfere in the internal affairs of other countries.

“The U.S., out of political purpose, went so far as to undermine freedom of speech and information sharing as well as fair and just order in cyberspace, in order to interfere in Hong Kong affairs under various pretexts and disrupt the HKSAR’s sixth-term chief executive election,” Wang told reporters in Beijing. The acronym refers to the Hong Kong Special Administrative Region.

On Thursday, a representative for the Hong Kong government called the termination of Lee’s YouTube channel “blatant interference in the internal affairs” of China.

“The political structure of the HKSAR is a matter within the purview of the Central Authorities,” the representative said on a government website. “The international community should fully acknowledge this fact and stop interfering in Hong Kong affairs which are internal affairs of China.”

Since Lee announced his decision to stand for chief executive in next month’s Hong Kong election, he had been using live broadcasts and shared videos to campaign on the three social media platforms.

His campaign website has for days juxtaposed links to the three platforms. However, the YouTube link disappeared Wednesday, and the channel of his campaign office could no longer be found by searching for “John Lee” on YouTube.

Lee’s campaign team explained that they received a notice from Google, YouTube’s parent company, saying the account violated the U.S. export and sanctions policy, so it must be terminated.

In response to inquiries from multiple media, Google said the company needs to comply with relevant U.S. sanctions.

The decision is unlikely to affect Lee’s candidacy, given that he is the only candidate for the post.

He called the sanctions “unreasonable and bullying” and said he is “disappointed” that he can no longer use some media, but that it will not affect his electoral engineering.

“I have emphasized many times that their unreasonable behavior will only make me more convinced that what I am doing is right,” Lee said.

Lee did not directly respond to whether he would punish the institutions that enforce the sanctions once elected as the chief executive. He said Hong Kong emphasizes the rule of law and will respond to Google’s actions in accordance with Hong Kong law.

Francis Fong, honorary president of the Hong Kong Information Technology Chamber of Commerce, explained why YouTube felt that it had to go further than Facebook and Instagram to comply with the U.S. sanctions.

“YouTube will insert advertisements in popular videos to provide revenue to video producers. YouTube may terminate accounts to avoid automatic transactions. Facebook does not have similar functions, so it adopts different standards,” Fong told VOA.

According to the advertising policies of YouTube parent Google, advertisers must comply with all U.S. sanctions and export regulations.

According to some experts, even if Lee is elected as the chief executive of Hong Kong, his tenure will not be seen as legitimate by the international community.

Kim-Wah Chung, deputy chief executive of the Hong Kong Institute of Public Opinion, said YouTube is simply following U.S. law, but that Lee’s removal from the platform reflects the sort of problems that Hong Kong will face after the election.

In June 2021, the Standing Committee of China’s National People’s enacted the law, which applies to individuals and organizations that formulate, decide and implement discriminatory measures. At a subsequent meeting in August, the Standing Committee surprised observers by failing to include the Anti-Foreign Sanctions Law in Annex III of the Basic Law, Hong Kong’s de facto constitution.