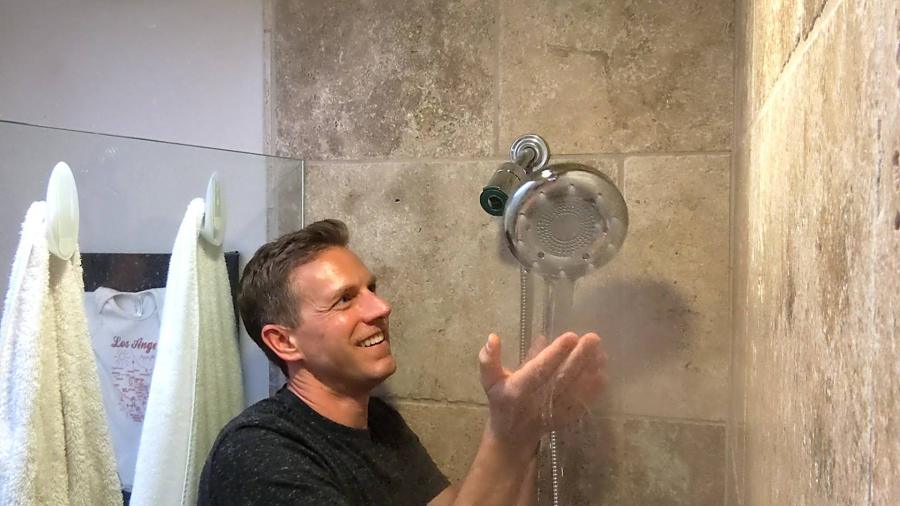 (KTLA) – A San Francisco startup named Nebia grabbed headlines for making a showerhead that won over fans including Apple CEO Tim Cook. Problem is, it cost hundreds of dollars, making it out of reach for many potential customers.

Now, the startup is introducing their least expensive version yet: the Nebia by Moen Quattro. At $99, it’s more affordable, and the company is turning to Kickstarter to help connect with buyers.

The secret to a more indulgent shower experience: a process called atomization.

The head is able to “disperse water into millions of much smaller droplets and creates this super enveloping spa like experience,” explained Philip Winter, one of the co-founders of Nebia over a Zoom interview.

“The feedback is that it actually feels like more water even though you’re using about half the water, said Winter.

Nebia sent me an early unit to test out and I immediately set out to install it in my shower. It’s supposed to be pretty easy, however, that wasn’t the case for my non-typical shower setup. Since the unit requires a pretty large base at the top of your showerhead, it wouldn’t fit properly on the small pipe that comes out from my wall.

I tried installing it in my other bathroom with more luck, however, it’s not recommended in showers that use curtains and I quickly learned why.

When you turn on the Nebia, water envelopes the entire shower. Imagine being in a sauna, but instead of tiny droplets slowly collecting on your skin, Nebia creates an all-encompassing mist.

Indeed, it is unique, it feels great and it’s unlike any shower I’ve taken before. I had no issues rinsing shampoo and soap off, but there are also several more traditional spray modes you can use if necessary.

Overall, I really enjoyed the showerhead and would definitely consider using one permanently if my primary shower (which is mostly enclosed) could accommodate it easily. According to a handyman I talked to, I would need to replace the pipe coming out of my wall to make it work.

One more thing: the Nebia feels like it is using a lot of water, but the creators tell me that it’s actually using up to 40% less water. It feels good knowing that you’re still getting a luxurious shower experience without totally ruining the environment.

“You save money, you save water, something that we need to do, but the reason people should buy this and install it and try it is because it feels awesome,” concluded Gabriel Parisi-Amon, a co-founder of Nebia.

Nebia is using Kickstarter to sell this new showerhead, at least initially. I’m typically skeptical of these offers, but Nebia says they’ve raised over $7 million on the platform previously and they plan to ship these showerheads to initial backers in September.

After the Kickstarter campaign, Nebia by Moen Quattro will be sold in stores for $129.

Listen to the Rich on Tech podcast for answers to your tech questions.