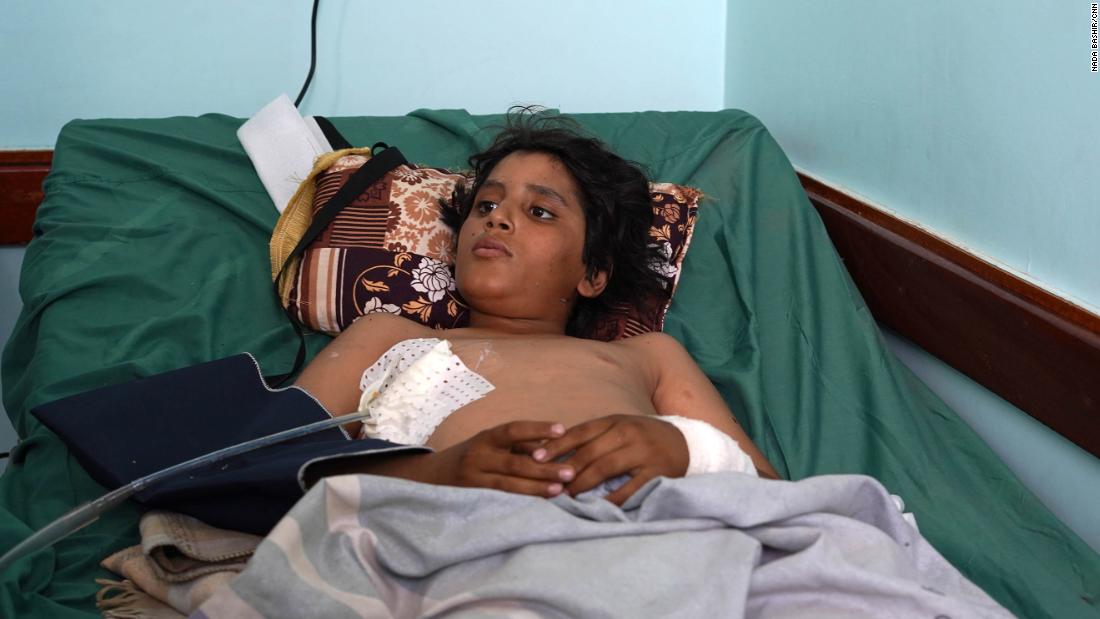 A Saudi failure to meet those demands should result in consequences, the senators wrote in a Wednesday letter to Biden that CNN has seen, “to include pending weapons sales, military cooperation, the provision of maintenance for war planes and spare parts, as well as U.S.-Saudi ties more broadly.”

“Immediate and decision action must be taken to end the ongoing blockade of fuel imports that is exacerbating the growing humanitarian crisis,” sixteen Democratic senators wrote in a letter led by Sen. Elizabeth Warren of Massachusetts. “The United States has diplomatic and economic leverage to compel Saudi Arabia to end its callous blockade of Yemen and we must use it before more lives are needlessly lost.”

A CNN investigation in March found that Saudi warships were preventing oil tankers from docking at the key rebel controlled Hudaydah port, including 14 vessels that had gained approval from a United Nations clearance mechanism to berth.A handful of those tankers were given permission to dock at the port by Yemen’s internationally recognized government — which is backed by Saudi Arabia and its military — in a move that was praised by the US State Department. However, humanitarian agencies in Yemen told CNN last month that the fuel was nowhere near enough to deliver aid to millions of people in the country’s north.

The senators wrote that the block on the “importation of commercial fuel into northern Yemen needed by nearly two-thirds of the Yemeni population … has negatively impacted food transporters and processors, hospitals, schools, and businesses.”

A State Department spokesperson told CNN last month that “there is no blockade” of Hudaydah, saying that it “remains open and commercial imports of food and other commodities are moving through the port at normal or above average rates, along with goods imported for humanitarian assistance purposes.” The spokesperson said that the US “does not support restrictions on the importation of essential goods into Yemen, including through Hudaydah port, by any party.”

Saudi Foreign Minister Prince Faisal bin Farhan Al Saud also denied the existence of a blockade in an interview with CNN in April.

But in their letter, the senators say the blockade tactics continue, pointing in part to a statement from the United Nations Secretary General António Guterres who “confirmed this crisis in February, noting, ‘no commercial fuel imports were allowed through Hudaydah Port’ exacerbating an already dire situation.”

“While your administration maintains that ‘[this] is not a blockade,’ Saudi action is undoubtedly preventing much needed fuel from reaching those in need and is exacerbating an already grave humanitarian crisis; the United States must work to put an end to it,” the senators wrote.

“Yemen was already the Middle East’s poorest country prior to the war, but the conflict and resultant blockade tactics have worsened the situation exponentially. The United States must make clear that these cruel and senseless blockade tactics imperil millions of innocent Yemeni people and are counterproductive to peace,” the letter said.

The lawmakers’ push was welcomed by groups that have worked to alleviate the devastation in Yemen. “It’s welcome news that this group of Senators is calling for an immediate end to the Saudi blockade on Yemen, that’s helping drive the world’s worst humanitarian crisis,” said Hassan El-Tayyab, legislative manager for Middle East Policy at the Friends Committee on National Legislation.

“The recent admission by the Department of Defense that US companies are still authorized to maintain Saudi warplanes, means that our government is still enabling offensive Saudi operations in Yemen, including bombings and enforcing an inhumane blockade on Yemen’s ports,” El-Tayyab said. “The administration must use its existing authority to block US civilian contractors from aiding the Saudi war effort, before more Yemenis are plunged into famine.”

The senators acknowledged “several positive steps” the Biden administration has taken to address the conflict in Yemen, a devastating civil war that has destabilized the country since 2014, when Houthi and other rebel forces loyal to a former president overthrew a transition government and Saudi Arabia launched a multinational military intervention in 2015.

“These are welcome steps,” the senators wrote, “but we must now address the serious harm caused by ongoing blockade tactics.”

Wednesday’s call to action from the senators follows a May 4 letter that a bipartisan group of senators sent to Secretary of State Antony Blinken calling for the administration to support another donors conference for humanitarian assistance to Yemen after a UN pledging event in March fell billions of dollars short. That pledging event raised approximately $1.7 billion, according to a statement from Guterres, “less than we received for the humanitarian response plan in 2020, and a billion dollars less than was pledged at the conference we held in 2019.”

In the May 4 letter to Blinken, Democratic Sens. Chris Murphy and Jeanne Shaheen and Republican Sens. Todd Young and Jerry Moran noted that they appreciated the top US diplomat’s appearance at that donor conference and the “announcement of an additional $191 million in U.S. assistance to alleviate the suffering in Yemen.”

“Unfortunately, international donors have fallen more than $2.5 billion short of what humanitarian partners in Yemen require this year,” they wrote. “We urge you to support another donors conference that fills that funding shortfall, as doing so could mean the difference between life and death for millions of Yemenis.”

The Biden administration has been actively engaged on Yemen, sending its special envoy for the country, Timothy Lenderking, to the region in April and May. In a May 7 statement, the State Department said Lenderking stressed “the need to ease all restrictions at Hudaydah Port and Sana’a Airport” to Saudi government officials, including Saudi Crown Prince Mohammad bin Salman, according to the State Department.

A State Department spokesperson told CNN that the US “opposes restrictions that arbitrarily delay or deny essential commodities from getting to the civilians who need them most.”