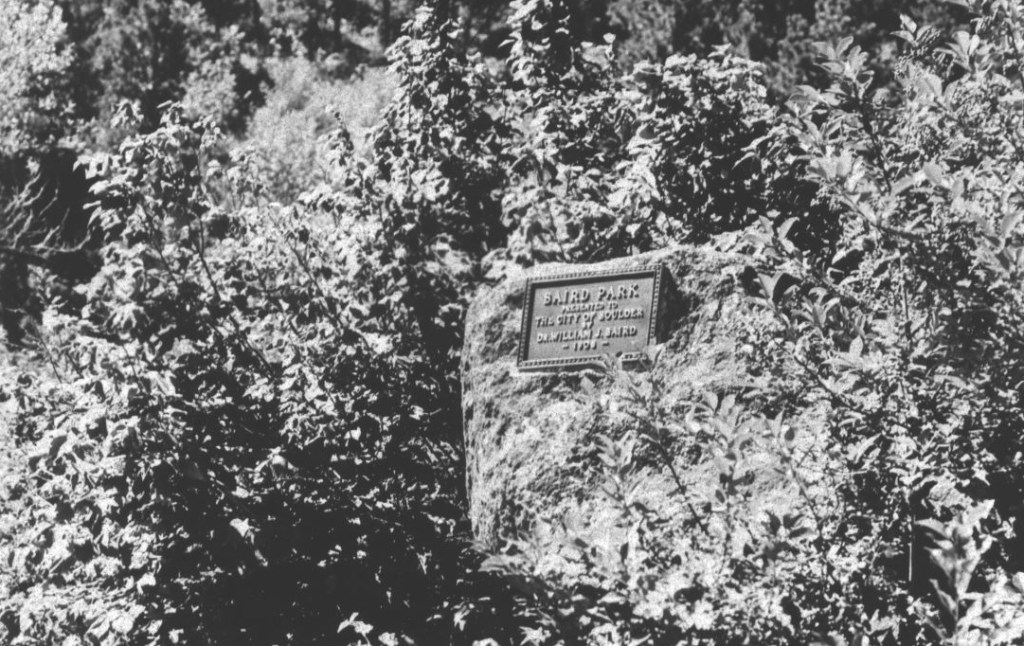 Gifts are a significant part of Boulder’s history. Many are familiar with land gifted to the state to secure the University in the mid-1870s, and monetary donations to the Chamber of Commerce to purchase land to give to the U.S. government for the National Bureau of Standards in 1950.

Many bequests were given to the city as well.

Long before Boulder voters approved an open space tax in 1967, parkland was donated. The U.S. government gave 1,800 acres to the city for mountain parks in 1899.

A bronze plaque in Gregory Canyon reads “Baird Park. Presented to the City of Boulder by Dr. William J. Baird. 1908.” Today the original plaque is set in a slab of concrete near the Gregory Canyon trailhead. (Carnegie Library for Local History, Museum of Boulder Collection/Courtesy photo)

In 1908, Dr. William Baird donated 160 acres for Baird Park, which begins at the bridge at Gregory Canyon.

The Boulder Woman’s Club, which was made up of wives of leading citizens, made quite a few donations for beauty and culture. The club, organized in 1900, gave money for trees and shrubs at Chautauqua Park and money for children’s books and artwork for the library. They gave an automobile for the city nurse in 1918 and trees for Central Park in 1923.

Boulder was one of many cities that benefited from the nationwide philanthropy of industrialist Andrew Carnegie. He donated funds for a library building in 1906.

Two units of the Civilian Conservation Corps benefited mountain parks. The CCC was one of President Roosevelt’s New Deal programs that put young men to work during the Great Depression. In 1933, the first unit constructed Chapman Drive, named for the Assistant Secretary of the U.S. Department of the Interior Oscar Chapman.

A second CCC group built the Flagstaff (now named Sunrise) Amphitheater, Green Mountain Lodge and portions of Flagstaff Road, among other projects. In a formal ceremony, the amphitheater was presented as a gift to the city in March 1934, followed by the presentation of Chapman Road in March 1935.

Other Depression-era gifts transpired. In 1937, William Beach gave 20 lots to the city for a park in the University Place addition for neighborhood children along with funds for landscaping. Two years later he donated two additional lots for the park.

The Lions Club gave the art deco band shell in 1938, now an architectural landmark. The club also donated amenities for other parks, including drinking fountains, picnic facilities and shelters.

Perhaps one of the most unusual donations was a gift for the future.

In 1922 the same Dr. Baird who donated mountain park land, incorporated a foundation with a few hundred dollars to benefit the city. Baird speculated that if the principal were left to grow for 300 years, his bequest would amount to $24 quadrillion dollars, according to his 1934 obituary. The fund will provide for any city improvements necessary such as a hospital, support for the library and public schools, a symphony, an art museum, a natural history museum and payment of municipal taxes. If the foundation still exists, Boulder will have to wait 200 years to reap those benefits.

In the meantime, enjoy Baird’s namesake Bluebell Baird Trail, and the other generous gifts that make Boulder a beautiful place to live, work and play.

Carol Taylor can be reached at carolellentaylor@gmail.com. She and Silvia Pettem alternate the “In Retrospect” history column.