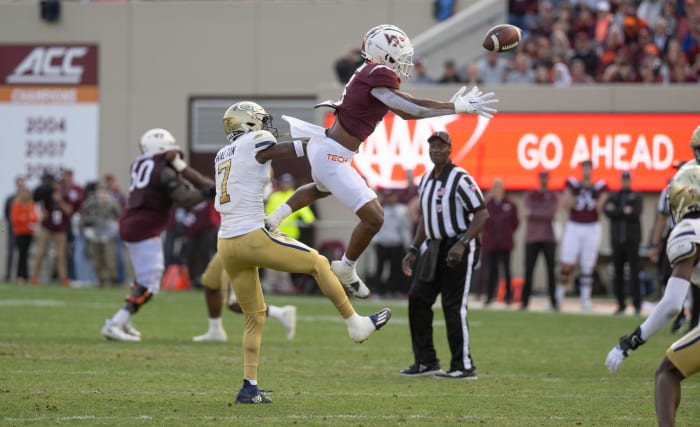 During the 2021 season, Georgia Tech had one of the worst secondaries in the entire country and lost most of the main contributors from that team heading into this past season. While there were some ups and downs, this unit was much improved in several areas and with cornerback Zamari Walton deciding to come back for the 2023 season, Georgia Tech is set up to have one of the ACC’s best secondaries in 2023.

One of the reasons for the improvement was the emergence of the safety duo of LaMiles Brooks and freshman Clayton Powell-Lee. Brooks finished as the highest graded player on Georgia Tech according to PFF (Pro Football Focus) and Walton and Powell finished No. 3 and No. 5. With the top three graded players in the secondary returning, this is going to be the strength of the entire defense and perhaps the entire team.

After losing Tariq Carpenter and Juanyeh Thomas at safety, Georgia Tech was going to have to replace both experienced safeties heading into 2022. The two guys that were thought to be the starters, Jaylon King and Derrik Allen, were replaced for different reasons. King sustained a season-ending injury early in the season and Allen was replaced by Powell-Lee, which proved to be the correct decision. Both players responded by putting up solid seasons.

Brooks finished the season with 52 tackles and a team leading three interceptions. His best performance came in a loss to Virginia, when he finished with nine tackles and a pick six. Brooks was the best player on the field that night and I expect more performances like that from Brooks in teh future.

When a true freshman steps into a starting role, there can be a lot of ups and downs that come with their play, but on a week-to-week basis, Powell-Lee stepped up in a big way and provided a consistent presence in the back of teh defense. He finished the year with 46 tackles, two pass deflections, and an interception. He played well in the win against Virginia Tech, totaling six tackles and an interception in the game and he was named the ACC defensive back of the week after that performance.

Zamari Walton improved as the 2022 season went along.

Walton was a starter from day one against Clemson, but his improvement was a highlight of the season for the Georgia Tech defense. He has been playing heavy snaps for the last few seasons, but not to the level he reached during the second half of the season. Walton finished the season with 36 tackles, an interception, and six pass deflections, which was second on the team behind Brooks.

Georgia Tech finished the season with the sixth-ranked pass defense in the ACC and sixth in interceptions. There is plenty of room for improvement on those numbers and with Brooks and Powell-Lee heading into their second season as starters, I expect improvement in those numbers.

One thing that is notable about the Georgia Tech defense going into next season is the guys that won’t be back. Keion White, the Yellow Jacket’s top pass rusher, and both Charlie Thomas and Ace Eley, the team’s two leading tacklers last season, are all gone. Until some other guys step up at those positions and take over, the secondary is going to be the strength of this team, and even if there is not a drop-off in production, this unit is going to be one that the Yellow Jackets should be able to count on.

Follow us on social media for the latest on Georgia Tech Athletics!

See all of the latest Tech News at AllYellowJackets.com