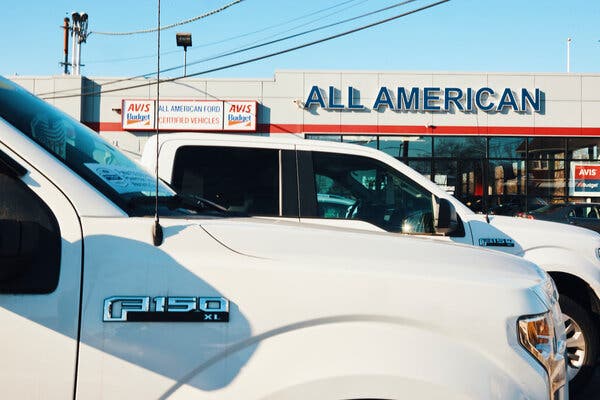 Here’s what you need to know:

European authorities will release data on Friday that is widely expected to show another economic downturn over the first three months of the year as the still-raging pandemic has prompted governments to extend lockdowns.

Coming a day after the United States disclosed that its economy expanded 1.6 percent over the same period — a robust 6.4 percent annualized rate — the expected European contraction presents a contrast of fortunes on opposite sides of the Atlantic.

Propelled by dramatic public expenditures to stimulate growth, as well as swift increases in vaccination rates, the United States — the world’s largest economy — expanded rapidly during the first months of 2021. At the same time, the 19 nations that share the euro currency were likely caught in the second part of a so-called double-dip recession, reflecting far less aggressive stimulus spending and a botched effort to secure vaccines.

But economic growth figures represent a snapshot of the past, and recent weeks have produced encouraging signs that Europe is on the mend. Even as Covid-19 spreads alarmingly in major economies like Germany and France, factories have revived production, while growing numbers of people are on the move in cities.

The initial lockdowns last year punished Europe’s economies, bringing large swaths of commercial life to a halt. But the current restrictions are calibrated to reflect improved understanding of how the virus spreads. Rather than closing their doors altogether, restaurants in some countries are serving meals on patios or dispensing takeout orders. Roofers, carpenters and other skilled trades have resumed work, so long as they can stay outside.

“We have sort of learned to live with the pandemic,” said Dhaval Joshi, chief strategist at BCA Research in London. “We are adapting to it.”

Vaccination rates are increasing throughout Europe, a trend likely to be advanced by the European Union’s recent deal to secure doses from Pfizer.

In depriving households of the opportunity to spend, the pandemic has yielded savings — money that may surge into businesses as fear of the virus fades.

Most economists and the European Central Bank expect the eurozone to expand at a blistering pace over the rest of 2021, yielding growth of more than 4 percent for the full year.

Still, even in the most hopeful scenario, Europe’s recovery is running behind the United States, a reflection of their differing approaches to economic trauma.

Since last year, the United States has unleashed extra public spending worth 25 percent of its national economic output toward pandemic-related stimulus and relief programs, according to the International Monetary Fund. That compares to 10 percent in Germany.

But Europe also began the crisis with far more comprehensive social safety net programs. While the United States directed cash to those set back by the pandemic, Europe limited a surge in unemployment.

“Europe has more insurance schemes,” said Kjersti Haugland, chief economist at DNB Markets, an investment bank in Oslo. “You don’t fall as hard, but you don’t rebound that sharply either.”

The average selling price of Ford models rose 8 percent in the first three months of 2021 compared with a year ago, to $47,858, according to the auto-sales data provider Edmunds.com.Credit…Mohamed Sadek for The New York Times

In the first months of 2021, what was good for the auto industry was decidedly good for the American economy.

Spending on motor vehicles and parts rose almost 13 percent in the first quarter, making a big contribution to the increase in gross domestic product, the Commerce Department reported Thursday. Strong sales of new and used vehicles were propelled by consumers who had delayed purchases earlier in the pandemic and by others who — because of the virus — wanted to rely less on public transit or shared transportation services like Uber.

In fact, demand in the first quarter was robust enough that the auto industry was able to post healthy results despite a shortage of computer chips that forced temporary shutdowns of many auto plants.

The number of new cars and light trucks sold increased 11 percent from the comparable period a year earlier, to 3.9 million, according to the auto-sales data provider Edmunds.com.

On Wednesday, Ford Motor reported it made a $3.3 billion profit in the quarter, its highest total since 2011. While it produced 200,000 fewer vehicles in the quarter than it had planned, the average selling price of Ford models rose to $47,858, 8 percent higher than in the first quarter a year ago, Edmunds reported.

The combination of strong consumer demand and tight inventories — partly a result of the chip shortage — has produced something of a dream scenario for auto retailers. At AutoNation, the country’s largest chain of dealerships, many vehicles are being sold near or at sticker price even before they arrive from the factory.

“I’ve never seen so much preselling of shipments,” said Mike Jackson, the chief executive. “These vehicles are coming in and going right out.”

In the first quarter, AutoNation’s revenue jumped 27 percent, to $5.9 billion, and the company reported $239 million in profit. That was a turnaround from a loss a year ago, when the pandemic crimped sales and forced AutoNation to close stores. 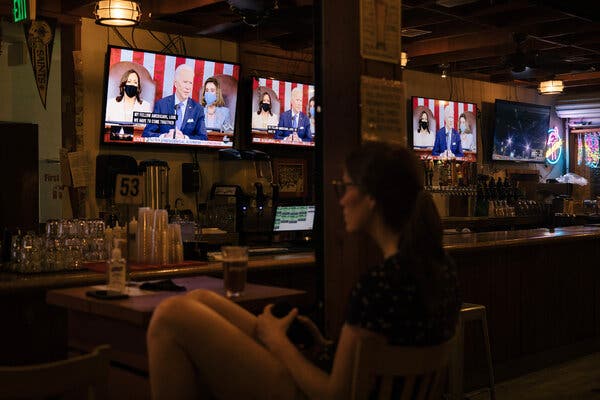 President Biden’s address to a joint session of Congress was on the screens at The Brig, a beer garden in in Washington, on Wednesday night.Credit…Alyssa Schukar for The New York Times

Nearly 27 million people watched President Biden’s first formal address to a joint session of Congress on Wednesday night, a large audience for television these days but a much smaller audience than similar speeches by other presidents, according to data from Nielsen.

Shown on all major networks and cable news channels starting at 9 p.m. Eastern time, the speech attracted a much larger television audience than Sunday’s Oscars telecast on ABC, which was watched by about 10 million people. But the audience was significantly smaller than the one for President Donald J. Trump’s first formal address to Congress in 2017, which drew 48 million viewers.

The television audience for Mr. Biden’s address also fell shy of those for equivalent speeches by other recent presidents. Barack Obama had an audience of 52 million in 2009; George W. Bush drew 40 million in 2001; and Bill Clinton’s first address was watched by 67 million in 1993.

Several factors contributed to the smaller ratings. Because of public health and security concerns at the Capitol, Mr. Biden’s speech came later in his presidency than those delivered by his recent predecessors, which all took place in February. There was also less pomp on Wednesday. Instead of an in-person audience of 1,600 senators, Supreme Court justices and other dignitaries seated cheek by jowl with House members, only 200 people were present because of social-distancing restrictions.

TV ratings, in general, have sunk in recent years, as more people have dropped cable subscriptions in favor of streaming, a shift that was accelerated by pandemic viewing habits. And the number of people watching television in the spring, compared with the winter, tends to be smaller.

The Fox audience came out in force for the post-speech analysis by anchors and commentators and the Republican rebuttal from Senator Tim Scott of South Carolina. In the 30 minutes after the address, Fox News was the only network to have a surge in viewers, with an average of 3.2 million people tuning in.

The analysis of the speech varied depending on the network. The Fox News contributor Ben Domenech said Mr. Biden’s speech was a “political blip” that would be “immediately forgotten.” (An earlier version of this item incorrectly stated that Mr. Domenech had called the speech a “tissue of lies.” That comment referred to Mr. Biden’s Inaugural Address.) On MSNBC, the anchor Brian Williams hailed the speech as “Rooseveltian in size and scope.” 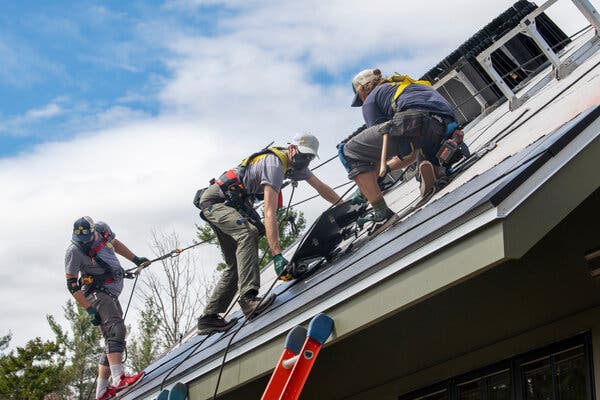 Tesla has been losing market share even as demand for rooftop solar power has grown.Credit…Caleb Kenna for The New York Times

Tesla’s solar ambitions date to 2015 when it announced that it would sell panels and home batteries alongside its electric cars. A year later, Elon Musk, the company’s chief executive, promised that Tesla’s new shingles would turbocharge installations by attracting homeowners who found solar panels ugly.

After delays, Tesla began rolling out the shingles in a big way this year, but it is already encountering a major problem, Ivan Penn reports for The New York Times.

The company is hitting some customers with price increases before installation that are tens of thousands of dollars higher than earlier quotes, angering early adopters and raising big questions about how Tesla, which is better known for its electric cars, is running its once dominant rooftop solar business.

The shingles remain such a tiny segment of the solar market that few industry groups and analysts bother to track installations.

Tesla is not the only company to pursue the idea of embedding solar cells, which convert sunlight into electricity, in shingles. Dow Chemical, CertainTeed, Suntegra and Luma, among others, have offered similar products with limited success.

But given Mr. Musk’s success with Tesla’s electric cars and SpaceX’s rockets, Tesla’s glass shingles attracted outsize attention. He promised that they would be much better than anything anybody else had come up with and come in a variety of styles so they could resemble asphalt, slate and Spanish barrel tiles to fit the aesthetic of each home.

During a quarterly earnings call on Monday, Mr. Musk insisted that demand for Tesla’s solar roofs “remains strong” even though the company had raised prices substantially. He described the last-minute increases as a teething problem.

Customers are unhappy with the growing pains. Dr. Peter Quint was eager to install Tesla’s solar shingles on his 4,000-square-foot home in Portland, Ore., until the company raised the price to $112,000, from $75,000, in a terse email. When he called Tesla for an explanation, he was put on hold for more than three hours.

“I said, ‘This isn’t real, right?’” said Dr. Quint, whose specialty is pediatric critical care. “The price started inching up. We could deal with that. Then this. At that price, in our opinion, it’s highway robbery.”