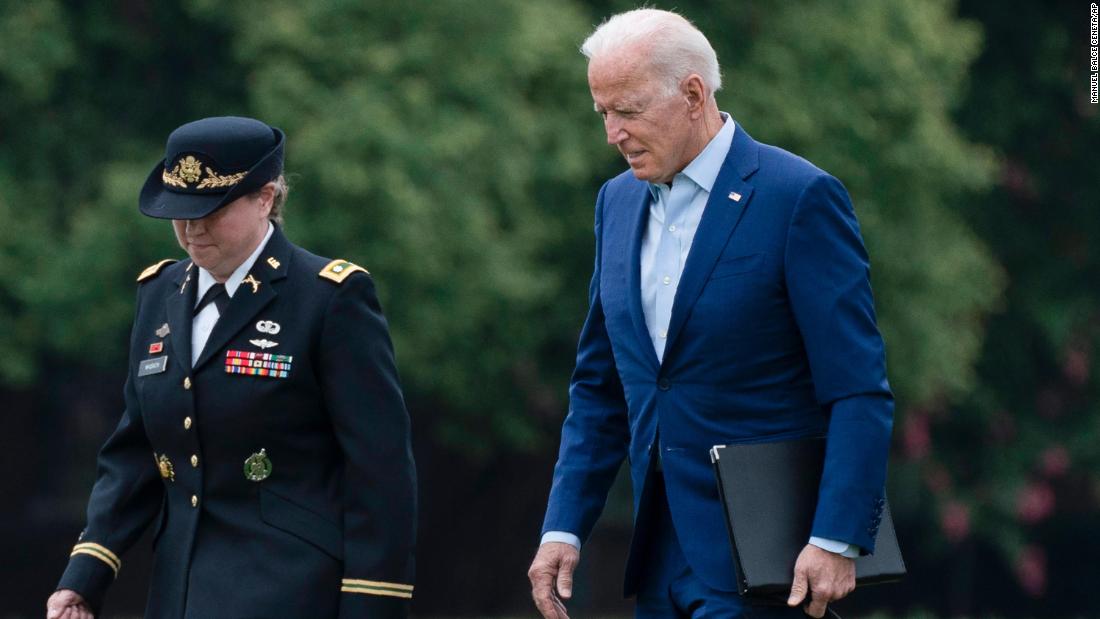 A crisis like the one unfolding in Afghanistan has, for some, hammered home the bleak reality that, without America, Europe’s immediate ability to control its own destiny is limited.

From London to Paris, Brussels to Berlin, the sudden fall of Kabul shone a light on Europe’s limited diplomatic heft, military capacity, and political stability.

Diplomats and officials all over the continent have privately expressed their sorrow that this is where we are: If the US says it’s over, it’s over.

We know from comments made by Britain’s defense secretary, Ben Wallace, that he thought the withdrawal was a mistake and signaled victory to the Taliban. UK government officials told CNN they had tried to encourage both the Trump and Biden administrations to slow down, but failed to convince them.

Starkly, Wallace said in a recent interview to Sky News that when the US “took that decision, the way we were all configured meant that we had to leave.”

Multiple European officials and diplomats told CNN of their shock at Biden’s assertion that the only US interest in Afghanistan was to neutralize the terrorists who attacked the US in 2001 and prevent further attacks on American soil.

They now fear the humanitarian and political consequences of mass migration from a country run by militants who’ve historically harbored terrorists and that is connected to mainland Europe by land.

Without the might of America to keep a lid on the situation, Europe is undeniably more exposed. As one EU official put it: “When America reversed course on Syria it sparked a crisis in Europe, not the US.”

When former President Barack Obama U-turned on his decision to attack the regime of Syrian president Bashar al-Assad following reports that he was gassing his own citizens, it had a knock-on effect still being felt today.

Not only did millions of Syrians flock to Europe seeking refuge, but the vacuum left by America left room for terrorist groups to build bases from where they could launch and inspire attacks across the world.

Geography and history suggest that once America is gone and the Taliban takes complete control of Afghanistan, ordinary citizens left behind who fear persecution will make every attempt to flee the country for somewhere safer.

That means Europe could soon see high volumes of migration from people seeking refuge, which, in turn, presents Europe — the EU especially — with a series of problems it could struggle to handle.

If the numbers fleeing Afghanistan look anything like the numbers that came from war-torn Syria in 2015, the EU essentially has two options: Pay off regional neighbors to hold the refugees or agree a quotas settlement across the 27-country bloc.

Politically, the EU is not in a great place to reach any such agreement so is leaning toward the former. However, Brussels tried this back in 2015 when it gave Turkish President Recep Tayyip Erdogan’s government money to stem the flow of migrants into the bloc.

“They’ve learned all the wrong lessons from 2015, where cutting a deal with Turkey backfired dramatically when President Erdogan decided it was politically convenient to use these people as weapons, letting them head for Greece,” says Zoe Gardner, policy advisor at Joint Council for the Welfare of Immigrants.

The fact Erdogan was able to weaponize refugees was, Gardner says, a symptom of populist politicians treating people fleeing war zones as dangerous and something to fear.

“It means people are inherently suspicious of them, so the starting point is people feeling negative about them. That often means they are treated poorly and makes governments take harder lines to keep them out. Which, sadly, means those determined to come are vulnerable to smugglers and people traffickers,” she says.

Tineke Strik, a member of the European Parliament’s committee on foreign affairs, is pessimistic at the political will in the bloc to reach an agreement. In turn, that likely means even worse conditions for these already vulnerable people.

“In so many member states there is an anti-refugee sentiment either in government or opposition. This turns not only political opponents against one another, but also nations who see political capital in taking a harder stance. In border countries, this could mean wire fences and tear gas aimed at people fleeing the most horrific conditions,” she says.

EU officials are very aware of the myriad risks this anti-migrant sentiment poses.

Following the 2015 migrant crisis, far-right, Euroskeptic groups made significant political gains through anti-migrant and anti-EU rhetoric. So successful were some of these politicians, they shifted the political center ground. In France, Germany, the Netherlands and Denmark mainstream political parties now use the language of the far-right to protect their base.

It helps the populist cause that historically both legal and illegal routes into Europe have been exploited by people seeking to carry out attacks in mainland Europe, though obviously these people represent a very small minority.

The combination of security concerns, anti-migrant sentiment, anti-EU rhetoric and member states wanting to look tough makes life extremely difficult for Brussels, which fancies itself as a leading global promoter of human rights, freedom and democracy.

An EU Commission official explained to CNN that it wanted to carry on funding humanitarian projects in Afghanistan that supported human rights, women’s rights and upholding democracy, but that it would be a hard sell to member states now that America has bailed, and the Taliban is in charge. If suddenly member states are asked to host thousands of Afghan citizens, they might be even less understanding.

Beyond the EU, the crisis has exposed just how much Europeans relied on the might of American security through NATO.

“My fear is that if the world feels that it can no longer look with the same level of certainty and confidence to the US or NATO… we will see emboldened moves from actors hostile or unfriendly to a more united Europe,” Roberta Metsola, a member of the European Parliament’s committee that works on migration and border security, tells CNN.

“That means that Europe must realize that the weight of the world democratic and security order rests more heavily on Europe’s shoulders. It is a wake-up call that we have snoozed too many times,” she adds.

Some are already calling for urgent action to address this. Tom Tugendhat, a British lawmaker who served in Afghanistan, spoke in a moving speech to the UK Parliament of a need for “reinvigorating our European-NATO partners, to make sure that we are not dependent on a single ally, on the decision of a single leader… and make sure that we hold the line together.” For Europe to reach the point Metsola and Tugendhat describe, there is a long path to walk. The UK, which has NATO’s second-largest military expenditure, felt it had no option but to follow the US out the door.

The EU has long talked about consolidating its military expenditure, but it’s an issue member states are so divided on that for Brussels to have anything like the power to plug the hole America’s left in Afghanistan would take decades.

Biden’s decision and lack of contrition has been criticized for many reasons. But perhaps the least palatable aspect of it is that America, bluntly, has the luxury of being able to leave in a way Europe — and other regional neighbors — cannot.

Tugendhat closed his speech on Wednesday by saying: “This is what defeat looks like: When you no longer have a choice of how to help. This doesn’t need to be defeat — but at the moment, it damn well feels like it.”

The free world, without its leader, is in no position to fix this mess and stand up for the values it holds so dear. And it’s certainly running low on choices of how to help.