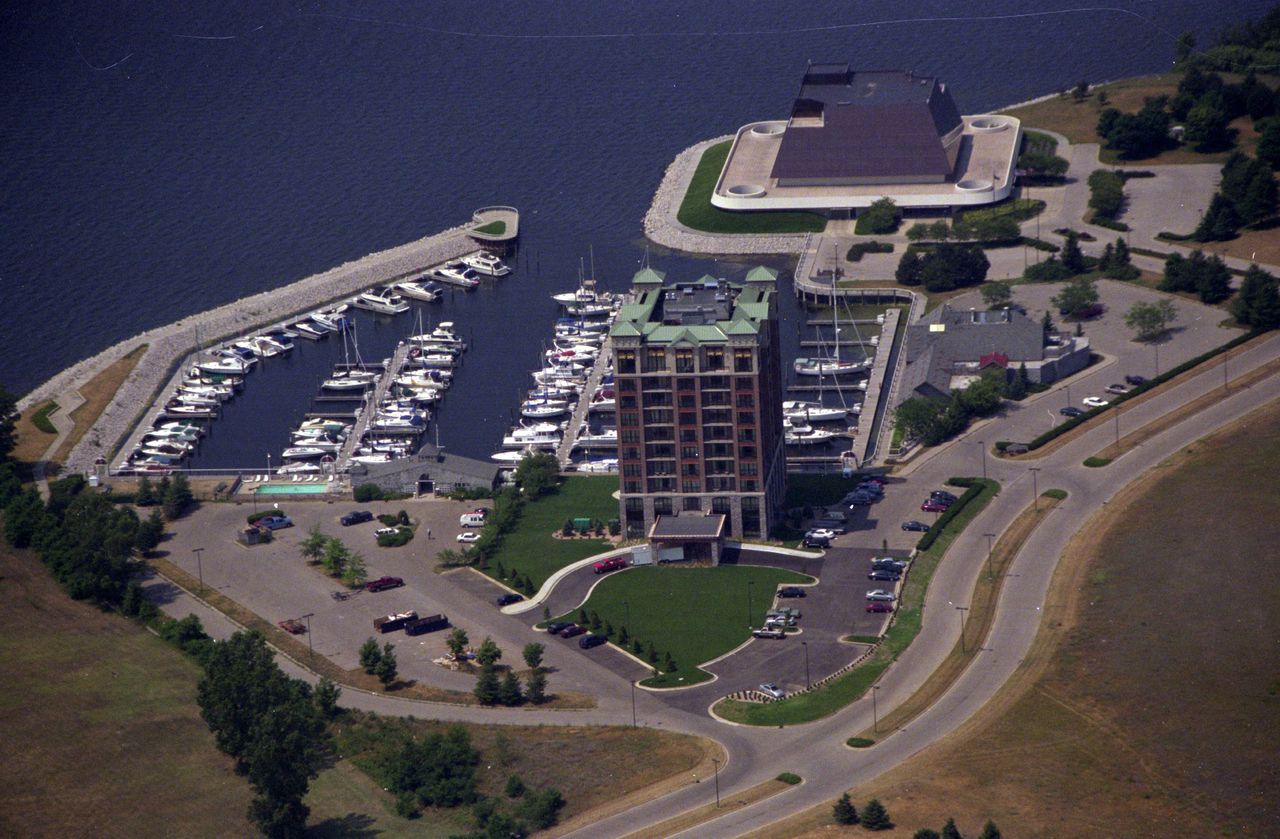 MUSKEGON, MI – A judge used pointed language in refusing to toss a lawsuit that challenges the city of Muskegon’s transfer of property with Muskegon Lake public access to a developer.

“The court finds that elements of bad faith accompany the transfer of the real estate and the extinguishment of (public access) easements,” Muskegon County Circuit Judge Kenneth Hoopes wrote in an opinion issued Monday, Jan. 9.

The transfer of a public street that accessed a public peninsula walkway to Jon Rooks and his Parkland Properties has been challenged by West Michigan Dock and Market, known as the Mart Dock, in a lawsuit filed last August.

A request by the city for a summary disposition rejecting the lawsuit claims was denied by Hoopes.

Parkland paid $1 to the city for the drive and lakefront walkway near its Shoreline Inn and Terrace Pointe Marina. The development company also paid $1 in return for the city erasing an easement that had allowed public access in perpetuity.

A development agreement outlining the property deal was approved by the city commission in December 2020. The actual property transfer didn’t occur for another year.

The Mart Dock claims the deal violated the state Constitution by trading public land for next to nothing. It also claims the city’s ordinance was violated because a public hearing wasn’t held prior to the vacation of a public street.

Hoopes wrote that it would be up to a jury to determine if the $2 was adequate compensation and whether the ordinance was violated.

Rooks is planning a dry marina, and possibly boat sales, for the location, which is next to his Terrace Point Marina and Shoreline Inn.

The promise that Rooks would pursue some sort of development, along with $2, was the city’s compensation for the property.

Hoopes wrote that “the agreement does not obligate the developer to do anything whatsoever for the city’s benefit.”

“The court agrees with Mart Dock that the hope for general economic growth as a result of a development project is not consideration for a contract,” the judge wrote.

He also said he has reached out to city officials, offering to “stay the proceedings” in return for a conversation about the lawsuit. So far, they have declined such a meeting, McKee said.

“It is the city’s decision to make. but public input is ultimately what should occur,” McKee said. “To be clear, it is the mayor and the city attorney that are leading the fight to deny regaining the waterfront public access. They have been controlling the city’s narrative and effort thus far; perhaps others will get involved.”

When contacted by MLive, Muskegon Mayor Ken Johnson declined to comment about the judge’s decision.

The agreement to transfer the property occurred under a different administration led by former City Manager Frank Peterson and former Mayor Steve Gawron. Johnson was a city commissioner at the time and expressed concern about losing public access when the agreement was discussed in December 2020.

In seeking a summary disposition of the case, the city argued that the Mart Dock does not have standing to bring the lawsuit, calling the corporation a “legal fiction” that can’t benefit from using the public space.

But Hoopes said the Mart Dock does have standing as a “municipal taxpayer.”

“In addition, the court notes that the disputed development agreement recites that part of the transferred property is to be used for parking for the benefit of the developer – a corporation,” Hoopes wrote.

The Mart Dock, which operates a commercial port and indoor storage facilities on Muskegon Lake near downtown, owns lakefront property adjacent to the Parkland Properties land that is in dispute.

The city argued that it didn’t violate the state Constitution because it received adequate compensation for the property. The Constitution states that municipalities can’t give away public property without compensation, or “consideration.”

The appropriateness of that compensation is not something the court should “second guess,” the city argued in its motion for summary disposition.

However, Hoopes wrote that “there was no consideration to support the development agreement.”

“There is no express obligation for the developer to pay the city any money for the parcel or for extinguishing the easements,” he wrote, later explaining, “the city’s hope for the future of its economy is all the agreement here contemplates.”

In 1991, the city and then property owner SPX Corp. agreed to a “dedication” of the property that it “forever” be available “for the use and enjoyment by the general public.” The property with that dedication later was transferred to the city.

In a “termination of dedication” filed in January 2022, the city declared that dedication was “no longer relevant” and Parkland paid the city $1 to terminate it.

Parkland also paid the city $1 for the quit claim deed on the property.

During a court hearing on the city’s motion in November, the city’s attorney said there are plans to guarantee access to the public, but they can’t be finalized until Rooks gets permits for the dry marina he’s planning for that area. As a result, the lawsuit is premature, attorney Sawyer Rozgowski argued.

Hoopes at the same hearing questioned why the city didn’t spell out in the development agreement its desire to maintain public access to the lake.

The dry marina Rooks is planning for the area involves in-out boat service and boat storage in a large warehouse located where the drive and a parking lot for the hotel and marina are located.

The marina could move 200 to 300 boats per day Rooks told commissioners in December 2020 when they were contemplating the development agreement.

The city will allow replacement parking for the hotel and marina, as well as Rooks’ nearby Lakehouse Waterfront Grille, to be constructed by Parkland on city-owned property as well as along Terrace Point Drive, according to the agreement.

$6M would be invested in Muskegon parks under plan that includes new director, advisory board