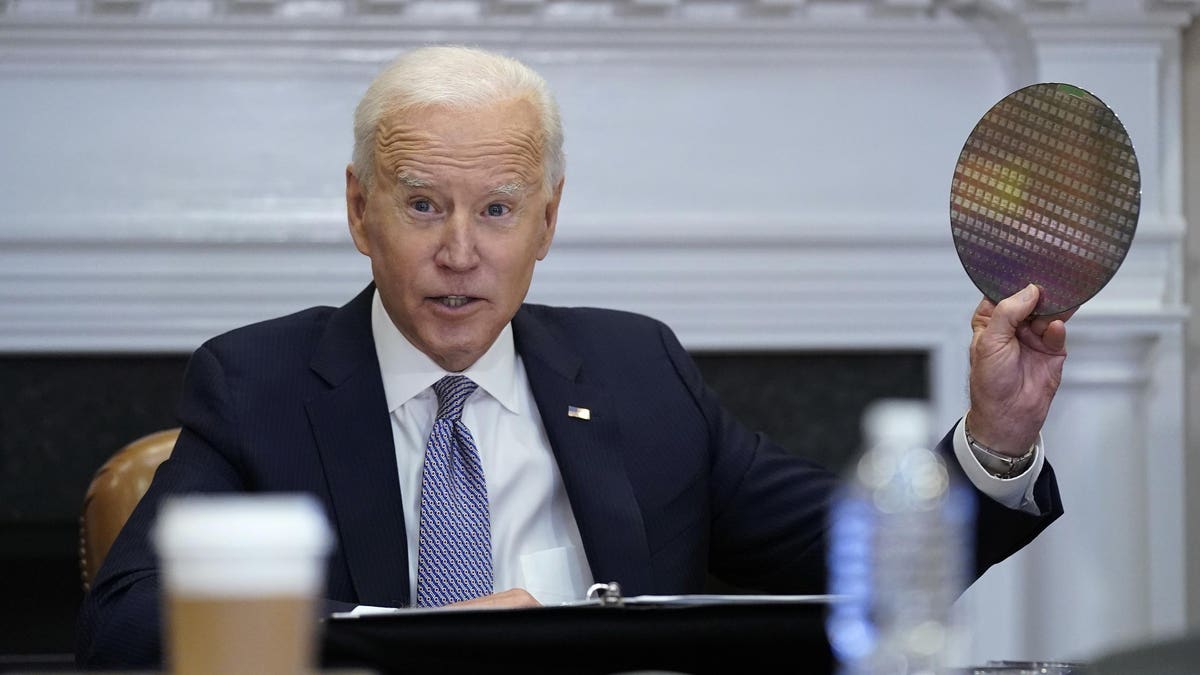 US President Joe Biden holds up a silicon wafer during a virtual CEO Summit on Semiconductor and … [+] Supply Chain Resilience. (AP Photo/Patrick Semansky)

By Brian Mich and Natasha Moore

Presidential transitions are often catalysts for expansive policy change and, so far, the Biden Administration has demonstrated that it will not be an exception. U.S. businesses reliant on global supply chains and disrupted by the coronavirus pandemic should follow how deals under review by the Committee on Foreign Investment in the United States (CFIUS) will likely determine future investment policy. So, what should we anticipate from the Biden Administration?

The Administration’s goal is to reduce the reliance on foreign-made inputs needed by critical industries and then determine whether any changes to U.S. legislation or policy are needed to bolster supply chains and prevent future shortages.

Investors and firms, especially those most impacted by the economic conditions of the pandemic, should expect potentially significant changes to U.S. supply chain and investment policies. Biden’s Executive Order identifies a diverse spectrum of supply chains most vulnerable, but prioritizes semi-conductors & advanced packaging, large capacity batteries, critical minerals, and pharmaceuticals for a more rigorous one-year review, rather than the 100-day assessments mentioned above.

Now more than ever, as these reviews get underway, it is important to understand the fundamental complexities of CFIUS, U.S. international trade rules, and how these rules may substantially change in the coming months.

Security concerns for America’s supply chains first emerged in the Trump administration during widespread shortages for critical medicines, personal protective equipment (PPE), and other critical supplies related to the coronavirus pandemic. While Biden’s Executive Order does not mention it specifically, China remains a key supplier for many of these goods. The unspoken concern about China is a popular bi-partisan issue predating the Trump administration because of a growing sense that there is an overreliance on China as a source of many goods.

However, Biden’s China strategy will not resemble his predecessor’s; instead of tweeting aggressive rhetoric and engaging in ideological confrontations and tit-for-tat actions, expect a resumption of strategic diplomacy and multi-lateral approaches to economic competition with China.

CFIUS was often Trump’s preferred and highly publicized instrument to blunt all Chinese investment. Biden’s CFIUS strategy will continue to include equally rigorous reviews; however, expect a less public review process with a greater inter-agency collaboration that, carefully and objectively, evaluates risk and seeks to use CFIUS as a mitigation tool. Examples like Biden’s recent postponement of the legal dispute over Trump’s proposed bans on the popular social media apps, TikTok and WeChat, illustrates Biden’s pragmatic commitment to evaluating risks from China.

A major part of Biden’s remedy to America’s vulnerable value chains is a strategic resistance to foreign ownership of assets in U.S. supply chains. U.S. businesses should bear in mind whether and to what extent their own value chain is dependent upon foreign supply chains and follow the progress of this initiative when evaluating manufacturing, sourcing, or planned joint ventures or investment activity. Biden’s Executive Order may not only evaluate prospective deals in critical U.S. industries, but also review any retroactively cleared foreign acquisitions by CFIUS. The Biden administration expects to consider how to “reform domestic and international trade rules and agreements needed to support supply chain resilience,” which will likely lead to a disruption of markets where China has succeeded.

So, what role will traditional alliances play in Biden’s strategy?

As part of Biden’s China strategy, the U.S. and Canada plan to deepen their financial and logistical partnerships, especially in technology and critical minerals sectors. The Canadian government recently issued revised Guidelines on the National Security Review of Investments that closely parallel CFIUS’ review process. While Canada’s tightened investment rules were not specifically prompted by the U.S. government, the revised Guidelines do come as the U.S. government works with Canada to boost regional supply chains to counter China’s dominance in these sectors.  Canada’s updated Guidelines, and other U.S.-Canadian agreements like the Energy Resource Governance Initiative and Joint Action Plan on Critical Minerals Collaboration illustrate that more agreements are likely to come in the future, and not just with Canada.

Biden’s bridge-building continued in March as he met with India, Japan and Australia to build more partnerships to counter China and will hold talks with European leaders in the coming weeks to specifically discuss how to stop China from securing sensitive technologies. Biden has made one thing clear; his priority is to bolster alliances and supply chains in order to prevent any foreign monopolization, or asset ownership in a U.S. supply chain, especially if they come from China.

Brian Mich is a Partner and Natasha Moore is a Consultant in the Compliance, Forensics and Intelligence practice at Control Risks, the global specialist risk consulting firm.