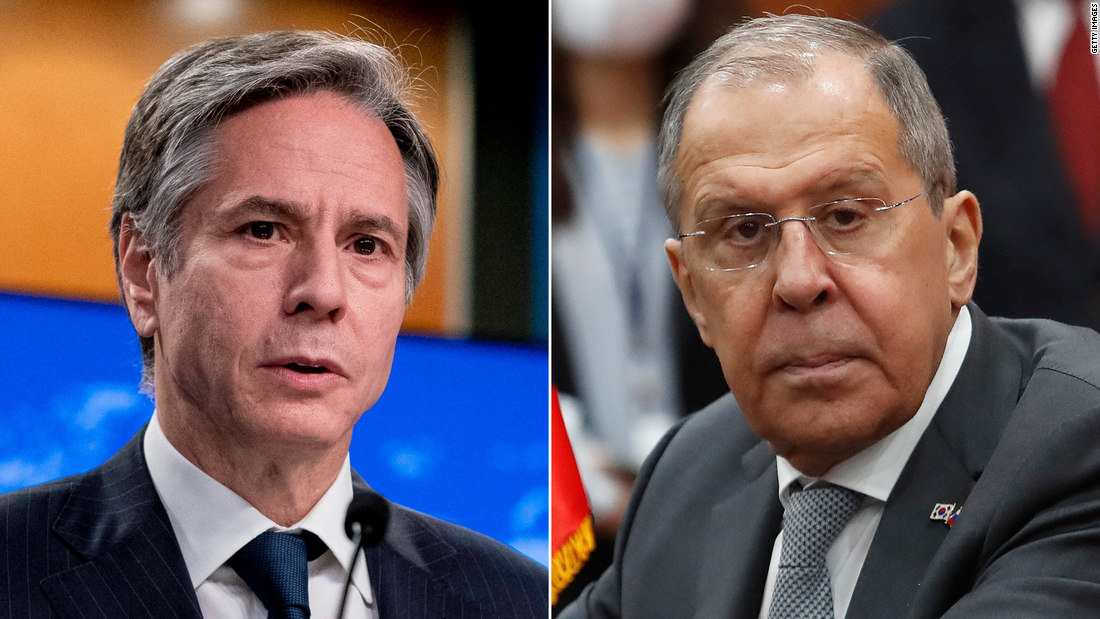 “It’s also no secret that we have our differences,” Blinken said at the top of the meeting, after he and Lavrov had greeted each other warmly.

“When it comes to those differences, as President Biden has also shared with President Putin, if Russia acts aggressively against us, our partners, our allies, we’ll respond,” Blinken said as he and Lavrov sat facing each other at a long rectangular table flanked by their delegations. “And President Biden has demonstrated that in both word and deed, not for purposes of escalation, not to seek conflict, but to defend our interests.”

But the top US diplomat added a caveat. “Having said that, there are many areas where our interests intersect and overlap,” he said, and urged cooperation on a range of “intersecting interests” including the Covid-19 pandemic, climate change, dealing with the nuclear programs in Iran and North Korea, and Afghanistan.

“We seek a predictable, stable relationship with Russia,” Blinken said. “We think that’s good for our people, good for the Russian people and indeed good for the world.”

Lavrov responded by saying that Russia’s “position is clear. We are prepared to discuss all issues on the table, with the understanding that our discussions will be honest, factual and with mutual respect.” But he, too, added a caveat, telling Blinken that “we greatly diverge when it comes to our assessment of international situation and our approaches towards how we should resolve it.”

And Lavrov appeared to signal that whatever steps the Biden administration might take against Russia, Moscow stands ready to respond. “Laws of diplomacy recommend mutuality, especially when it comes to response to any kind of hostile actions,” the Russian foreign minister said. “You can always rely on us to respond mutually to such intentions.”

Blinken and Lavrov met on the sidelines of an Arctic Council meeting in Iceland and were expected to chat without a stringent time limit or any topics off-limits, sources familiar with the plans for the meeting explained. The discussion was expected to cover a wide range of substantive issues between the two nations ahead of a possible summit between Biden and President Vladimir Putin early this summer — but many of them are fraught.The two men met a day after news broke that the US will not sanction the company in charge of building Russia’s Nord Stream 2 gas pipeline, despite strongly opposing the project with a State Department spokesperson calling it a “Russian malign influence project” that “threatens European energy security and that of Ukraine and eastern flank NATO Allies and partners.”

As Blinken met with Lavrov, the State Department released a statement about Nord Stream 2 from the top diplomat. “I have determined that it is in the national interest of the United States to waive the application of sanctions on Nord Stream 2 AG, its CEO Matthias Warnig, and Nord Stream 2 AG’s corporate officers.

“Today’s actions demonstrate the Administration’s commitment to energy security in Europe, consistent with the President’s pledge to rebuild relationships with our allies and partners in Europe,” Blinken said in the statement. “We will continue to oppose the completion of this project, which would weaken European energy security and that of Ukraine and Eastern flank NATO and EU countries. Our opposition to the Nord Stream 2 pipeline is unwavering.”

The top US diplomat was expected to directly raise a range of aggressive Russian activities, including the Solar Winds hack that targeted private businesses and government, Moscow’s election interference, the wrongful detention of US citizens in Russia, its human rights abuses and detention of opposition activist Alexey Navalny, and the expulsion of each other’s diplomats, three sources said.

Blinken also planned to emphasize areas where the countries could work together — such as North Korea, Iran, and Arctic issues — explained another source. In comments to reporters Tuesday, Blinken made clear that the US also has disagreements with Russia on the resource-rich and strategically important Arctic, particularly Moscow’s push to militarize the region, but stressed that there, too, the US will look for areas of cooperation.

“We have concerns about some of the increased military activities in the Arctic. That increases the injuries or prospects of accidents, miscalculation, and undermines the shared goal of a peaceful and sustainable future for the region, so we have to be vigilant about that,” Blinken said, speaking at a press conference Tuesday in Iceland.

“There’s been cooperation on a number of important areas, over the years on education, oil spill response, search and rescue, pollution issues, and it is our hope that that … the Arctic means an area of peaceful cooperation and peaceful collaboration,” Blinken said.

Biden administration officials want the Putin-Biden summit to go forward so that the two leaders can discuss matters face-to-face. In the lead-up to that high level meeting, US officials are taking a measured approach to Moscow, explained one source familiar.

That approach contributed, in part, to Biden’s carefully calculated response to the recent hack on the Colonial Pipeline, which was carried out by a criminal group based in Russia, one source said. There is no evidence “so far” that Russia is involved in the cyberattack, Biden said, but he added that Russia has “some responsibility to deal with this.”

State Department spokesman Ned Price said the hope is to “achieve a relationship with Moscow that is more stable and predictable.”

Since Biden’s election, stability and predictability have been in short order and in April, the US intelligence community said in an annual report that Russia “presents one of the most serious intelligence threats to the United States.”

Moscow has also been making clear it can pose a military threat. Russia built up a massive troop presence along the border of the US’s eastern European allies, including Ukraine, this spring and in April blocked foreign naval ships and state vessels in the Kerch Strait, the sea of Azov and parts of the Black Sea — a move NATO and the Pentagon criticized.

As Blinken met with Lavrov, a major question for Biden administration officials was where Russia intends the presidential summit to go in terms of substance and tenor, two sources said. During Wednesday’s meeting, Biden and Lavrov were expected to take stock of one another, said sources familiar with the planning, as well as Russia experts, which will inform how their countries prepare for a possible leaders meeting.

One critical issue on the agenda involves the US embassy in Moscow and its ability to function.

In April, Lavrov announced what he called “tit for tat” measures against the US after Biden announced sanctions to punish Moscow for its interference in the 2020 US election, the SolarWinds cyberattack and its ongoing occupation and “severe human rights abuses” in Crimea. Those US penalties included the expulsion of 10 Russian diplomats in Washington, including “representatives of Russian intelligence services.”

Russia responded with a barrage of measures that included sanctions against eight senior US administration officials, including FBI director Christopher Wray and Director of National Intelligence Avril Haines; expelling 10 US diplomats; curbing the ability of those remaining to travel around Russia; barring the ability of Russians or third-country nationals from working at the embassy; and suggesting US Ambassador John Sullivan leave the country.

Russia’s ambassador to the US had already returned to Moscow in March after Biden agreed with the assessment that Putin is a “killer” in a TV interview.

Like his administration officials, Biden has said the US will work with Russia where possible — the two sides cooperated soon after Biden took office to extend the New START arms control agreement — but that Moscow will also face consequences for its actions against the US and its allies.

During his first foreign policy speech, Biden underscored that point. “I made it clear to President Putin in a manner very different from my predecessor, that the days the United States rolling over in the face of Russia’s aggressive actions, interfering with our elections, cyberattacks, poisoning citizens are over,” he said.