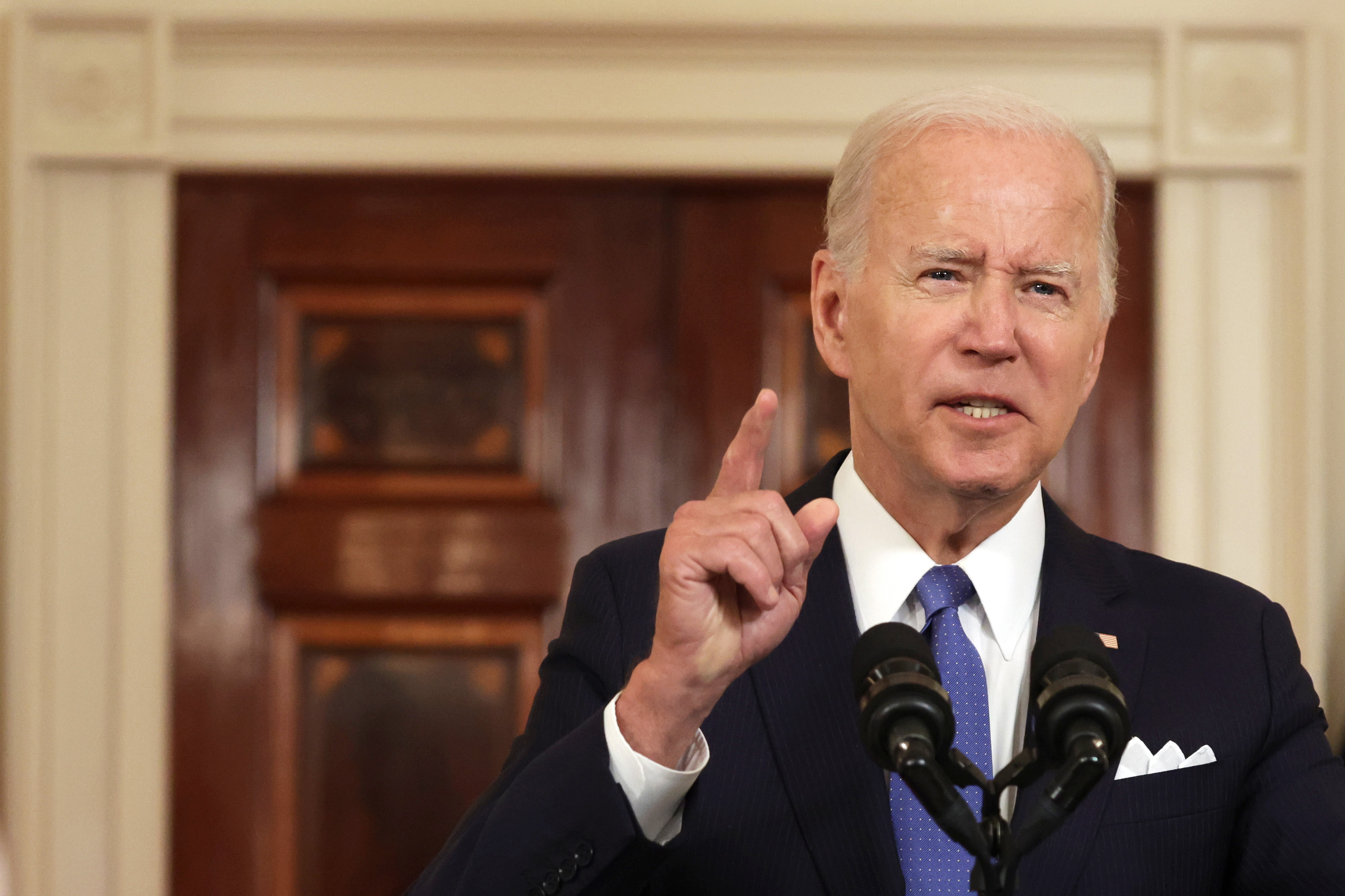 Biden has long prided himself as an institutionalist loath to challenge the validity of the court. He resisted signing onto a slate of proposed reforms that include expanding its membership, imposing mandatory age limits on justices or instituting a code of ethics. Friday’s remarks made no mention of such changes.

But they were notable, as far as Biden prepared speeches go, for their intense bite. The president singled out Justice Clarence Thomas by name for laying the groundwork to reconsider the right of same-sex marriage and for couples to make their own decisions on contraception. He also framed the court’s three newest members as being beholden to Donald Trump, the president who nominated them to the bench. The midterms, he added for good measure, would be defined by their ruling.

Despite the sharp rhetoric, Biden advisers don’t anticipate that he’ll use the court itself as a battering ram in the coming midterms. John Anzalone, a longtime Biden pollster, said while just a quarter of Americans have confidence in the Supreme Court, he does not envision Democrats running against the conservative Justices so much as the GOP candidates who would use their ruling to ban all abortions — many of them in “extreme cases.”

Friday’s ruling took the issue from the hypothetical to a reality, Anzalone said, and in all but 10-plus states abortion will be illegal — “and there will be a reckoning against the GOP because of this.”

“The key to a lot of close midterm races will be the outrageous quotes by GOP candidates on their position on abortion even in the case of rape and incest,” Anzalone said, recalling past Senate hopefuls in tight races who were felled by their own positions and words. “They are Todd Akins and Richard Mourdock on steroids.”

A Biden adviser echoed his remarks, pointing to the president’s emphasis on women being forced to carry the children of a rapist, and moves by congressional Republicans to impose a federal abortion ban. “Our messaging to the public is primarily going to be about how this is affecting people,” the adviser said.

How hard, if at all, Biden chooses to attack the Supreme Court could shape the contours of an election cycle in which Democrats are bracing for potentially widespread losses. Most midterms are a referendum on the party in control of the White House, which in turn tries to turn them into a choice between the two parties. To date, Biden has attempted to do just that, deeming Republicans as enthralled with Trump’s “ultra MAGA” brand. He has picked fights with Sen. Rick Scott (R-Fla.) over threats to entitlement programs and blasted Sen. Ron Johnson (R-Wis.) for putting Obamacare in the crosshairs.

But calls are growing from outside the White House to turn the midterms into a referendum on the court itself and to do so by attacking the institution and its conservative justices as political players whose power needs to be curtailed by growing Democratic majorities in Congress.

Mark Mellman, the Democratic pollster, said that “there will be a lot more impetus” behind some of the court reform proposals that Biden has resisted.

And Brian Fallon, executive director of court reform group Demand Justice, said Biden should subordinate his institutionalist streak and unrelenting belief that he could help bring back an era of bipartisan comity. He urged the president to not squander the political opportunity before him to make “a villain out of these Trump-appointed Supreme Court justices issuing hugely unpopular decisions that are extremely relevant politically.”

“The White House is on the defensive over inflation and gas prices. … And here is a contrast waiting to be drawn and the only thing stopping them is their allergy to picking fights on partisan lines,” Fallon said.

As evidence of the opportunity he believes is at hand, Fallon pointed to yet-to-be-released polling commissioned by his group and performed by Hart Research, showing that Democrats are more focused on the court than Republicans (69 percent to 60 percent), and that liberals are engaged much more than conservatives (71 percent to 47 percent). Traditionally, those numbers have been flipped, and exit polls of recent presidential elections found more Republicans than Democrats factored court appointments as their highest priority.

Fallon’s internal survey also found more than six in 10 voters across key battleground states say they are paying attention to the Supreme Court and its decisions, up from 51 percent in April 2021.

Biden’s remarks on Friday came during a week of pitched decisions on everything from Miranda rights to the legal limits of gun ownership. With decisions going routinely in conservative directions, Democrats up and down the ballot cast the court’s majority as ideologues who put their personal views ahead of constitutional duties.

Earlier Friday, House Speaker Nancy Pelosi ripped the justices that ruled to overturn Roe as “right-wing politicians that Donald Trump and Mitch McConnell packed the court with.” And on Thursday, following the court striking down a law that required New York residents to have “proper cause” to carry a handgun, Sen. Chris Coons (D-Del.), a close Biden ally known for choosing his words carefully, blistered the court as being “led by conservative judicial activists who twist constitutional analysis to substitute their own policy preferences.”

Biden, for his part, laid out steps he’d take to try and dull the impact of the court’s decision. He spoke about the Justice Department intervening if states tried to block people from accessing contraception or traveling for an abortion. He also spoke about the threat of “extremist” governors and state legislators looking to block the mail in states with medicated abortion and again vowed that he would be taking more steps in the future.

“What we want to see fundamentally is him rising to this moment with executive actions that do everything possible to protect access to abortion, and there were some tangible steps in there,” said Leah Greenberg, co-executive director of the progressive group Indivisible.

But Greenberg went further than Biden would. She said the slate of rulings points to a need for reform and expansion because “we have seen what this court will do if it continues to go unchecked.”

“We have seen the court demonstrate that it intends to simply make the laws that it wishes to make in accordance with its extremist, right-wing philosophy,” she said. “And it is a moment for everyone who has previously placed their faith in an institutionalist reading of the court to recognize that this is not the court they have previously understood to be exercising power, and to update their views accordingly.”

Sam Stein contributed to this report.