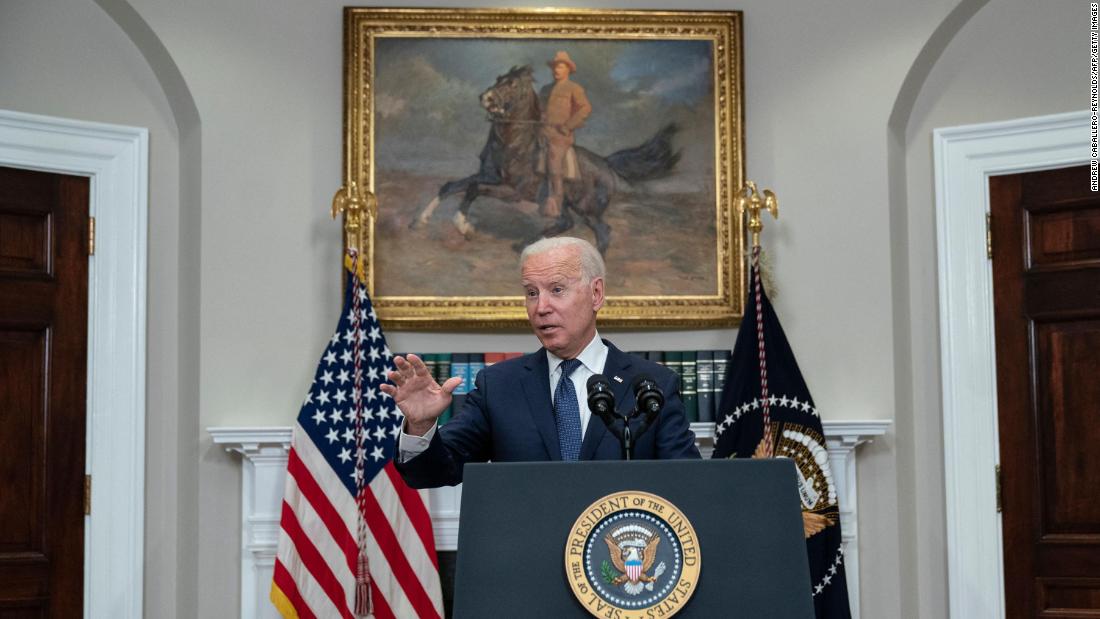 “Our determination to get every American citizen home and to evacuate our Afghan allies is unwavering,” the President said, after he canceled a weekend in Delaware to stay close to his national security and disaster management teams.

His remarks — which still raised more questions when an official later clarified Biden’s statements about the expansion of a safe zone around Kabul airport — carried a strong sense of a political reset following a week in which images of helicopters lifting off from the US embassy in Kabul projected the impression of a humiliating retreat after a 20-year war that ended in defeat.

There has rarely been a moment in this presidency when trust in the President’s word and his truthfulness has been more important. The rampage of the Delta variant of Covid-19 across the country is now averaging 150,000 new cases per day, six weeks after Biden declared partial independence from the virus. While the President has little control over Americans who refused to get vaccinated and left themselves vulnerable to the disease, the prolonging of the emergency threatens the economy and Democratic prospects in 2022 midterm elections. Millions of American school kids are meanwhile returning to in-person classes amid a political war over masks and with parents frantic with worry about a virus that is now posing a greater threat to children.And Biden starts the week with another headache as the House of Representatives returns to consider a bipartisan infrastructure plan and a $3.5 trillion spending blueprint that exposed sharp divisions in the Democratic caucus. As his statesmanship is examined abroad, Democratic tensions will test the President’s domestic political skills that were highlighted in getting both measures through the 50-50 Senate.

A critical moment in the Afghan evacuation

Biden’s point-by-point briefing about the expanding American rescue effort from the Roosevelt Room of the White House came after he also projected authority in addressing fatal flooding in Tennessee and the impact of Tropical Storm Henri. His comments on the floods that killed 21 people and the storm that hit the northeast were particularly moving. And his decision to talk in detail about those two challenges before his Afghanistan update may have been a hint that the White House believes unfolding tragedies on US soil may concern Americans more than those across the globe.

Still, the deep peril of the Afghanistan evacuation and the impact it could have on Biden’s political fortunes was underscored when he warned that the Afghan affiliate of ISIS posed a threat to US forces and those who want to flee.

“Every day we have troops on the ground. These troops, innocent civilians at the airport, face the risk of attack from ISIS-K from a distance,” Biden said. That reality reflected the fundamental vulnerability of not just US troops but that the President’s own political position depends on events beyond his control in Afghanistan.

After the stunning collapse of the Afghan state and the Taliban’s victorious march into Kabul, the White House had to endure days of unflattering media coverage and speculation about the impact of the fiasco on Biden’s reputation for leadership and his immediate political prospects.

But if the US airlift continues without incident in the days ahead, all of those who need to be extracted can leave Afghanistan, and American troops get out without casualties, the worst damage to Biden’s reputation may be averted in the United States — if not among dismayed allies abroad. For all the confusion, the evacuation could end up being considered something of a success.

It remains to be seen, however, if Biden’s upbeat report, about 28,000 people flown out of Kabul since August 14 and a willingness to rescue everyone who needs it accurately reflects facts on the ground where thousands of people are jammed into Kabul airport and thousands more wait outside, according to CNN sources.

Several times last week, the rosy picture of events offered by the White House was contradicted by eyewitness reporting in the Afghan capital, raising questions about Biden’s candor or his command of a chaotic situation. There were new questions on this score on Sunday. The President implied US troops had expanded a safe zone around the airport and gave the impression that they were now conducting unspecified operations to extract citizens who couldn’t reach entry points there. But a senior administration official later clarified that it was the Taliban that are going to be opening new entry points and that US operations at the airport had not been changed or expanded.

Biden’s struggles last week appear to have already caused some political erosion, though also support arguments that his presidency is not completely hostage to events in Afghanistan so far. In an NBC News poll published Sunday his approval rating dipped to 49%, down from 53% in April, though still better than anything ex-President Donald Trump managed. But only 25% approved of how he managed the withdrawal from Afghanistan. A CBS News survey, meanwhile, showed that 74% of Americans thought the withdrawal had gone very or somewhat badly.

And the President faces some excruciating political choices in the week ahead. It is still far from certain that with the Taliban in control, he will be able to extricate all US citizens or Afghan translators and others who worked with US forces. There were reports Sunday, for instance, that local staff from the now abandoned US embassy had no way to get through Taliban cordons to reach evacuation flights at the airport.

Biden said there were discussions inside the administration about extending his deadline of August 31 for the operation to end.

Any decision to end the airlift before all Americans and Afghans eligible to come to the US get out would spark a torrent of criticism in Washington. But the rescue effort is taking place on a knife edge, dependent on the tacit cooperation of the fundamentalist Taliban and is a target for terror groups.

“A great nation is a nation that keeps its word,” warned Republican Sen. Ben Sasse of Nebraska on Fox News Sunday.

“We’re talking about men and women who risk their lives to protect Americans. They fought hand-in-hand with our troops and we made promises to them,” Sasse continued.

Republicans are seeking to use the crisis to create a narrative that Biden is incompetent, and to broaden the critique to his handling of border policies, the resurgence of the pandemic and the economy.

Biden adamant he was right to leave the Afghan war

While Biden’s remarks appeared to be a tacit acceptance by the White House that some of last week’s criticisms were rooted in fact, Biden offered no concessions on his wider point — that he’s correct to end the war.

“The question is when is the right time to leave?” he said Sunday, after taking a card from his pocket listing the 2,448 combat deaths in Afghanistan and more than 20,000 wounded. “I am not about to send your son and your daughter to fight in Afghanistan,” the President said in a direct appeal to American viewers. He also insisted that history would vindicate his decision as logical, right and rational.

Biden and supportive liberal commentators have repeatedly sought to blur the distinction between the chaos of the withdrawal and the decision to leave. They have also portrayed Biden’s critics as all keen to prolong a hopeless war.

But the most accurate accounts of his leadership failures focused squarely on the administration’s failures to predict the fall of Kabul, the collapse of Afghanistan’s armed forces and the lack of preparation and sufficient troop numbers for a massive airlift to rescue Americans and others.

Biden has not been held accountable for the strategic decisions of three previous Presidents that led to defeat in Afghanistan, as some of his backers claim. And honest critiques have included details of the hypocrisy of ex-Trump administration officials like former Secretary of State Mike Pompeo, who negotiated a plan for an even earlier US withdrawal with the Taliban in a deal that included the freeing of extremist prisoners who have swelled the Taliban ranks. In the latest example of his habit of siding with US foes who threaten his political opponents, Trump bizarrely praised the fundamentalist group at a rally on Saturday night in Alabama, lauding them as “tough fighters, great negotiators.” Some pro-Trump Republicans and conservative media commentators have already begun to question the idea of the US accepting thousands of Afghan refugees, raising familiar slanders about the possibility they could have links to terrorists. Apparently with this in mind, Biden said that no aircraft were being flown directly from Kabul to US soil. And he said that all Afghans eligible to enter the United States were being subjected to security vetting.

In one of the most surprising twists of this crisis, Biden’s trademark empathy was fleeting following harrowing scenes at Kabul airport as Afghan civilians clung to US aircraft, and several fell to their deaths after takeoff.

But on Sunday, he said his “heart aches” over the images on television and that he had been moved by US veterans to save their former translators. Many of those veterans had criticized the lack of preparation of the US withdrawal effort.

“It’s heartbreaking. We see it, we feel it. You can’t look at it and not feel it,” Biden said, referring to the humanitarian plight of Afghans.

The President vowed to welcome in the United States those Afghans who helped the US in its longest war “because that’s who we are. That’s what America is.”

While Biden’s political standing may depend on completing the US exit from Afghanistan without serious US casualties and getting all Americans home, the country’s partners abroad — and history — are likely to also judge him on how much that pledge is fulfilled.