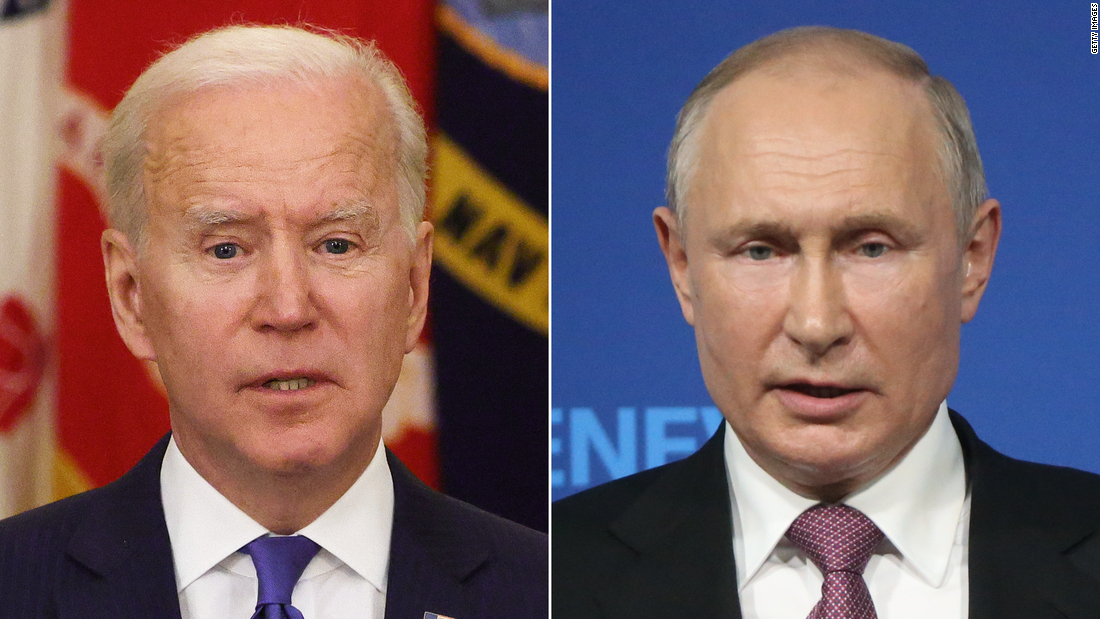 America’s posture in providing a third country with that level of assistance to wound the US’ nuclear superpower rival would have been unthinkable before the invasion, especially given Biden’s desire to avoid a direct clash with Moscow.

The US role — at the vanguard of a broad Western front against Putin, which is resulting in heavy losses for the Russian army — is again raising questions about how far the Kremlin strongman can be pushed before he reacts.

This reality means Biden is under enormous pressure to calculate how far to go in Ukraine without crossing red lines that Putin has neither identified, nor may not have even established in his own mind, to avoid a disastrous slide toward war.

A sobering warning from the CIA director

This shadow game between Washington and Moscow is unfolding against a backdrop of vicious fighting in eastern and southern Ukraine. In the latest atrocity, about 60 people are feared dead after a Russian aircraft dropped a bomb on a school in Luhansk where civilians were sheltering on Saturday afternoon. That carnage, typical of a ruthless pattern of attacks by Russian forces on civilians, underscored the sobering warning from CIA Director Bill Burns about the dangers of a new phase of the war.

“(Putin’s) in a frame of mind in which he doesn’t believe he can afford to lose,” Burns said at a Financial Times event in Washington on Saturday. “I think he’s convinced right now that doubling down still will enable him to make progress.”

Burns also said that while the US is not seeing any evidence so far that Russia is mobilizing smaller yield, tactical nuclear weapons for use in Ukraine, the possibility that it might seek to do so cannot be dismissed.

“Given the kind of saber-rattling … we’ve heard from the Russian leadership, we can’t take lightly those possibilities,” Burns said. “At a moment when … the stakes are very high for Putin’s Russia and those risks at this second phase of the conflict are serious and should not be underestimated.”

This reality makes Monday’s Victory Day parade, celebrating the victory over Nazism in World War II, especially symbolic and Western observers are waiting to analyze Putin’s rhetoric for hints of how the war in Ukraine will unfold. The celebration typically allows Putin to showcase examples of his nuclear capable missile arsenal — a spectacle that will have especially chilling implications this year.

The US balancing act is particularly acute because Putin has made clear for years that he believes the US is involved in a long-term effort to topple him and stifle Russia, so the rhetorical distinctions made in Washington about what the US is and isn’t doing for Ukraine may be lost on the Russian leader isolated inside the Kremlin.

“It’s not only javelins and stingers that are killing Russians and destroying equipment; intelligence is a weapon as well,” former Director of National Intelligence James Clapper told CNN’s Erin Burnett last week.

The stakes for the US and the world were underscored when the New York Times, CNN and other outlets revealed that US intelligence contributed to successful attacks against senior Russian armed forces leaders and the country’s naval flagship, the Moskva, which was sunk in a fearsome military and symbolic blow.

When the news accounts emerged, senior US officials insisted that the US was acting in a legitimate and perfectly legal manner and that it was up to Ukrainians how to fit valuable battlefield intelligence into their strategy for the war.

“We’re providing them with the intelligence, so that they can defend themselves against Russian aggression and also put them in a position where they’re stronger at the negotiating table against the Russians,” Linda Thomas-Greenfield, the US ambassador to the United Nations, told CNN’s Jake Tapper on “State of the Union” Sunday.

“How they use that intelligence is up to them. But what we want to make sure is that they have the equipment and the information and the wherewithal to fight this war in a way that helps them to defend their own sovereignty.”

The US is arguing that it is not engaging in a proxy war with Russia but is in fact helping Ukraine defend itself — a step that would not have been necessary if not for the unprovoked Russian invasion.

The unknown question is how Putin is processing such characterizations of the American role and whether he could lash out — especially given the disastrous state of the war following stiff Ukrainian resistance using western arms and ammunition.

Russian Foreign Minister Sergey Lavrov has, for example, already accused the US of fighting a proxy war in Ukraine and warned the risks of a world war are now “considerable” as a result.

Individual decisions about how the US is helping Ukraine sometimes appear confusing or illogical from the outside. For instance, earlier in the war, the White House vetoed a plan by Poland to send Soviet-era jets to the country in order to avoid overly antagonizing Putin. And the New York Times reported that the US was not providing information to Ukrainians about the whereabouts of the highest level of Russian generals in the country. The latter prohibition may be designed to protect Americans from reprisal attacks, at a time when more and more US officials and lawmakers are visiting war-torn Kyiv. First lady Jill Biden made an unannounced visit to southwest Ukraine on Sunday.

While the US insistence that it has not offered targeting intelligence to Ukraine may be an attempt to avoid the chances of a flare up with Russia, it is a rhetorical construct that may not mean that much in practice.

Still, Kurt Volker, a former US ambassador to NATO, rejected the idea that the US was fighting a proxy war with Russia in Ukraine.

“We are in a position of helping Ukraine defend itself against a direct Russian attack on Ukraine. This is not about two superpowers sitting off somewhere and having their minions go off and fight a war against each other,” Volker said on CNN’s “Smerconish” on Saturday.

“This is Russia directly involved in trying to exterminate Ukraine, calling them Nazis. And Ukrainians defending themselves and getting a lot of support from the rest of the world as they do so,” Volker said.

It may suit Russia for the world to view the war as a massive contest with the West rather than a smaller engagement with the former Soviet republic on its border. While Putin’s crackdown on independent media means that many Russians are not getting a true picture of the abject performance of their military, there’s propaganda value in the sense that the struggle, and subsequent reversals, are in the context of a wider war against the West instead of a smaller power.

But so far, Putin has not taken a fateful step to widen the conflict, in part because of the West’s deterrent capabilities. From publicly available sources, there seems no evidence of wide-scale cyber-attacks on US facilities that the administration had feared. Russia has not, so far, sought to stop the flow of arms into Ukraine through outside countries — a move that could spark a direct showdown if it occurred on NATO territory.

But the possibility that such clashes could happen, by Russian design or through miscalculation, will remain as long as the war goes on. There is also no sign that the West is lessening its commitment. In fact, it’s the reverse.

“Today, I spoke with G7 Leaders and President (Volodymyr) Zelensky about our ironclad unity and commitment to keep strengthening Ukraine and ratcheting up the pain on Putin,” Biden wrote on Twitter on Sunday after a global video call.

Biden’s comment was noteworthy because it conveyed the sense that the West, after imposing some of the most punishing economic sanctions in history on Russia, is still trying to turn up the heat on Putin. The US on Sunday announced a new round of sanctions cutting off Kremlin-controlled media outlets from American advertisers and prohibiting the country from using US-provided management and accounting consulting services.

There is no meaningful diplomatic push to end the war from the West. This vacuum is apparently born from a sense in Washington and some European capitals that Ukraine — thanks to its heroic resistance and the flow of Western arms — is to some extent winning the conflict. And Putin is showing every sign of grinding on, however awful the cost.

But the broader geopolitical risks that come with this reality will only grow alongside Western pressure.