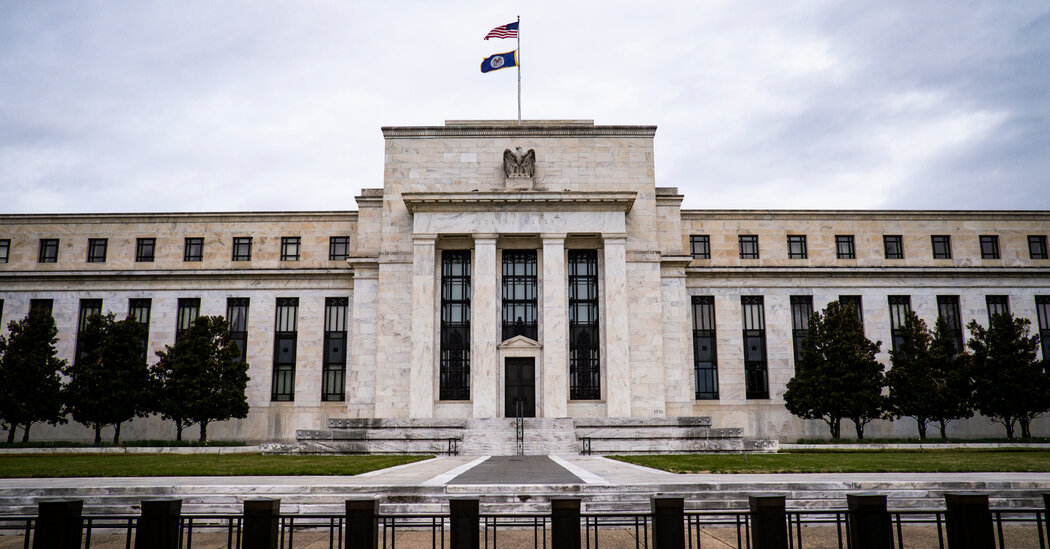 After a virtual meeting with tech manufacturing executives on Monday, President Biden was asked about his latest economic headache: How worried should Americans be that the country might be in a recession?

“We’re not going to be in a recession,” he replied.

The president’s aides have spent much of the past several days making that case publicly, ahead of critical economic data set for release on Thursday that could, at least informally, signal the start of a recession by a common shorthand definition.

It is the latest chapter in a challenge that Mr. Biden has faced since taking office: trying, largely unsuccessfully, to persuade Americans that the economic recovery is stronger than people perceive.

After more than a year of attempting to soothe consumer anxieties over soaring inflation, Biden administration officials have segued into a sustained public campaign to extinguish fears that the nation’s economy has dipped back into recession. Officials have leaned heavily on the strength of the job market and referred frequently to the criteria used by the economic research committee that formally declares when recessions start and end.

The campaign has been complicated by the Federal Reserve, which has tried to slow the economy in seeking to wrestle inflation under control. On Wednesday, the Fed was expected to make another supersized interest rate increase, likely lifting rates by three quarters of a percentage point and raising the odds of a policy-induced downturn later this year.

The administration’s arguments that the country was not currently in recession were supported by some economic indicators, by many forecasters and by the technical definitions of what constitutes a recession that are employed by the National Bureau of Economic Research’s business cycle dating committee.

“Consumer spending remains solid, household balance sheets remain in good shape,” Brian Deese, the director of the National Economic Council, said at a White House briefing on Tuesday. The full scope of economic data, he said, was “not consistent with a recession.”

But the fact that Mr. Biden and his aides have spent so much time fending off talk of a recession shows just how glum Americans have grown about the economy, and why it has been so hard for the administration to change their minds.

To paraphrase an old political adage: If you’re explaining how recession calls are made, you’re losing.

Mr. Biden has tried for more than a year to persuade Americans that the economy is strong and that inflation, which has been running at its fastest pace in 40 years, will fade. He has emphasized rapid job creation and a falling unemployment rate, noting on Monday that it was down to 3.6 percent.

Key Themes From the 2022 Midterm Elections So Far

The state of the midterms. We are now over halfway through this year’s midterm primary season, and some key ideas and questions have begun to emerge from the results. Here’s a look at what we’ve learned so far:

Americans have not bought it. Consumer confidence has slumped as food, gasoline and other prices soared. Voter dissatisfaction with Mr. Biden’s economic stewardship has grown, as have attacks by Republicans, who have blamed the president’s policies for fueling inflation and eroding Americans’ purchasing power, just months before midterm elections that will determine whether Democrats continue to control Congress.

About half of respondents in a June survey of Americans nationwide conducted for The New York Times by the online research platform Momentive said they believed the economy was already in a recession or a depression. Another quarter said the economy was “stagnating.” Republican responders were more pessimistic than Democrats, reflecting an ongoing partisan split in views of economic performance depending on who occupies the White House.

But more than half of independent voters said the country’s economy was in a depression or recession, as did a third of Democrats.

Administration officials frequently acknowledge the squeeze Americans have felt from rising prices, which have had the effect of reducing the typical worker’s wages after adjusting for inflation. They have also expressed frustration that Mr. Biden had not gotten more credit for a rapid jobs rebound after he inherited an economy that had just began to climb out from the steep and swift pandemic recession of 2020.

Officials have pointed to continuing strong job growth as evidence that the U.S. was not in a downturn, along with an unemployment rate that is near a 50-year low, and note that gas prices have now fallen for six straight weeks.

Still, the Biden administration’s insistence that the country is not in a recession may be drawing more attention to the dark possibilities currently hanging over the economy than the White House might otherwise like to see. Fox and CNN set records this week for on-air mentions of the word “recession” in the Biden presidency, and CNBC came close to reaching one as well. Taken together, those three cable networks have mentioned “recession” more times this month than in any month since 2009 except one, according to data compiled by the GDELT Project.

And officials have been keenly aware that the U.S. economy could soon meet a commonly used shorthand for recession, if the Commerce Department reports on Thursday that the economy shrank for a second consecutive quarter this spring.

That definition is easy to understand and widely employed: A recession, it holds, is triggered when the economy contracts for two consecutive quarters. In the first quarter of this year, the U.S. economy shrank by 1.6 percent. Many forecasters expected Thursday’s gross domestic product report would show further shrinkage in the second quarter, though some projected slightly positive growth instead.

Global trends have not helped the White House make its case. A gloomy forecast from the International Monetary Fund released on Tuesday said some indicators suggested that the United States was already in a “technical” recession, which the I.M.F. defines in the shorthand way — two consecutive quarters of negative growth. Forecasters warned of slowing growth across America, Europe and China, raising the chances of a global downturn.

The administration has tried to make the case that the shorthand recession definition does not fit the strange circumstances of the pandemic recovery in the U.S., especially given the strong labor market. “Both official determinations of recessions and economists’ assessment of economic activity are based on a holistic look at the data — including the labor market, consumer and business spending, industrial production, and incomes,” members of the White House Council of Economic Advisers wrote last week.

In some ways, there was no need — or ability — to settle the question anytime soon. The Commerce Department will revise its estimate of second-quarter growth at least twice after its initial reading on Thursday, and it could revise the first-quarter estimate in an annual update later this year. All those revisions could push the country in or out of the shorthand recession criteria multiple times. A couple tenths of a percentage point on an economic growth reading could tip the scales either way, but Americans would be hard-pressed to notice a difference in their daily lives from it.

Still, the distinction matters both politically and in practical terms. Spiraling economic pessimism has undercut Mr. Biden’s approval ratings and contributed to Democrats’ fears of losing at least one chamber of Congress in the midterm elections. Worry that the economy was entering a recession could potentially cause consumers to pull back on spending or employers to scale back hiring. Just this week, Walmart slashed its profit forecasts and reported high prices were affecting consumer choices at its stores.

Mr. Biden tried to stir economic optimism on Tuesday, appearing virtually with executives from a Korean company, SK Group, to announce $22 billion in new investments in the United States. Mr. Biden said the investments were “further proof that America is open for business.”

Perhaps the biggest political danger for Mr. Biden is that he ends up correct about the possibility of a recession in the moment, but wrong down the road. Even if the economy grew in the second quarter, it could fall into recession this summer or right before the midterms, especially if global oil prices spike again, a development administration officials were trying to head off.

The I.M.F. warned on Tuesday that the risks for the global economy were “overwhelmingly tilted to the downside.” It revised down its projections of growth in the United States, forecasting just 0.6 percent annual growth for the fourth quarter of 2023.

Such a slowdown, I.M.F. officials wrote, “will make it increasingly challenging to avoid a recession” — no matter how you define the term.