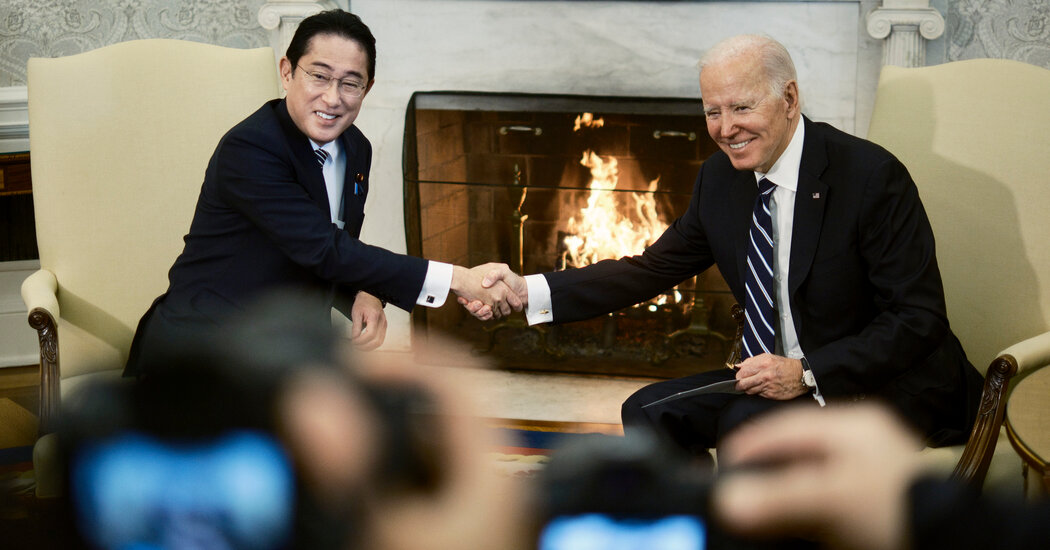 The United States and Japan also announced on Friday a new agreement to cooperate on the exploration of outer space and the moon and “other celestial bodies.” Antony J. Blinken, the U.S. secretary of state, and Yoshimasa Hayashi, the Japanese foreign minister, signed the agreement at an event at the National Aeronautics and Space Administration headquarters.

U.S. and Japanese officials said on Wednesday that the two nations would expand their military cooperation, including by improving what the governments call Japan’s missile counterstrike capabilities and making the U.S. Marine unit in that country more flexible for potential combat. Japan has said it plans to buy hundreds of American-made Tomahawk cruise missiles. At the moment, Britain is the only U.S. ally with the missiles.

While administrations in Tokyo have been reinterpreting the meaning of the constitutional restrictions on the nation’s defense forces for decades, Mr. Kishida’s decision to pursue a counterstrike capability goes beyond what even some of the more hawkish members of the ruling Liberal Democratic Party have been willing to say publicly.

By making those commitments anew in Washington, and getting vocal support from Mr. Biden and other U.S. officials, Mr. Kishida is locking in some of his new military pledges. He will now have to navigate getting the Diet, Japan’s parliament, to help deliver on them.

Japan’s move to grow its military power could cause unease in South Korea, another U.S. ally, because of longstanding anger among many Koreans over Japan’s violent occupation of the Korean Peninsula last century. That issue continues to hamper relations between the two nations.

Under the new U.S. deployment arrangement in Japan, those who are serving in Okinawa as part of the 12th Marine Regiment, an artillery unit, will transform into a more mobile group: the 12th Marine Littoral Regiment. The new configuration will allow the troops to more easily fan out to other islands along the coast when needed, U.S. officials said.