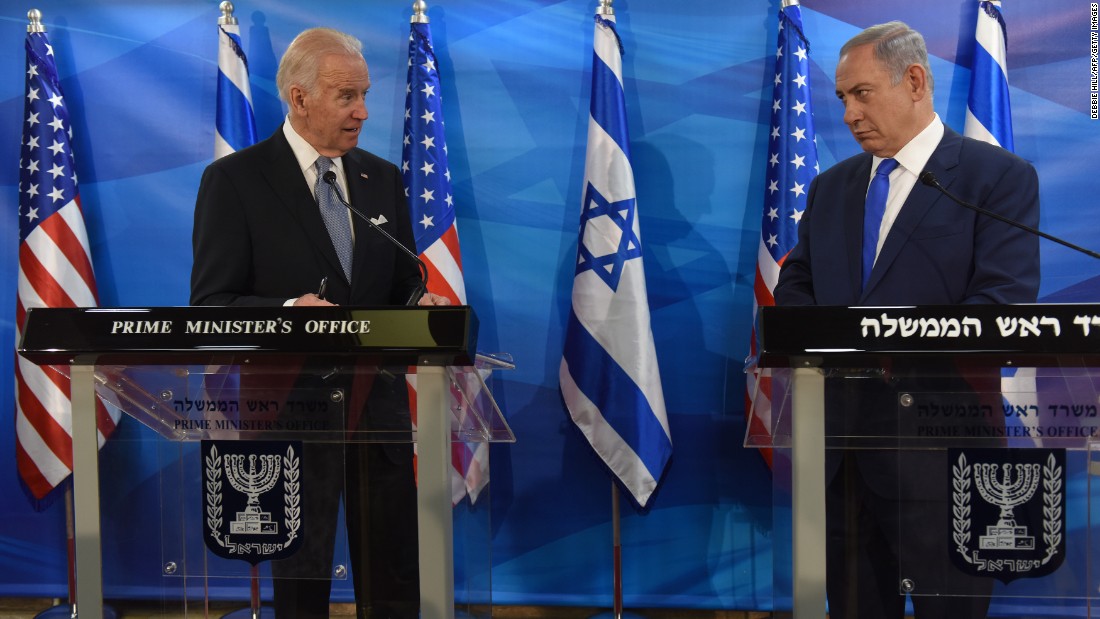 “My love for your country was watered by this Irish lady, who was proudest of me when I was working with and for the security of Israel,” a grinning Biden told Netanyahu at his official residence. “That’s a great honor.”

Netanyahu later claimed to have known nothing about the timing for the settlement plans. But the move caused already-apparent rifts to deepen with the Obama administration and left Biden enraged, according to a person familiar with his reaction.

“He was humiliated,” recalled Bruce Jentleson, who at the time was serving as a policy planning aide at the State Department. “It was really in-your-face.”

Eleven years later, as the worst violence in years flares between Israel and Hamas militants in Gaza, Biden is again testing his friendship with Netanyahu. The two men have spoken three times in the past week, with each subsequent call described by the White House using progressively more urgent language to characterize Biden’s message.

After their talk Monday, the White House said for the first time that Biden expressed support for a ceasefire, a subtle but clear signal to Israel that the President is feeling the pressure as more than 200 people are killed in the campaign against Hamas.

Before the call, Biden had not been expected to publicly mention a ceasefire, according to people familiar with the discussions, as aides advised him to stick with the behind-the-scenes approach. But the call was much firmer in tone than the White House revealed publicly, according to people familiar with the matter. A White House official told CNN Biden that is “always direct and straight forward” during talks with world leaders, including Netanyahu.

“The role the United States is going to continue to play is maintaining a quiet and intensive channel for diplomacy, not providing a public analysis of the global and domestic reaction to the violence on the ground,” the official said.

Biden warned Netanyahu that pressure to affirmatively call for an end to the hostilities was growing as violence stretched towards a tenth day. In their own conversations, US officials have relayed similar messages to their Israeli counterparts, encouraging them to find a way to end the violence, according to people familiar with the matter.

And as Israel has faced international blowback over its strike last weekend on a high-rise building in Gaza that housed the Associated Press and Al-Jazeera, US officials have privately been pushing Israel to publicly disclose, without jeopardizing sources and methods, the information they had that justified the air strike. Israeli officials have publicly said they shared evidence with the US that Hamas had a presence in the now-destroyed building, leaving some in the administration frustrated with what they see as Israel’s attempt to drag the US into the back-and-forth over whether the attack was justified.

As Biden and top officials take a firmer line with their Israeli counterparts, they have picked up some signals that the Israeli campaign may start to wind down in the coming days, according to one person familiar with the discussions. While the person did not elaborate or provide a specific timeline, the conversations have served to bolster the belief inside the administration that the path of “quiet but intensive” diplomacy, which they’ve pursued and relentlessly messaged publicly, is the right course of action.

The person described the strategy of pursuing the conversations behind the scenes as a calculation that Israelis would recoil at public pressure — a lesson other officials said was gleaned from the experience of the Obama administration, when relations with Netanyahu reached new lows.

“Biden is an old hand in these kinds of situations and I think he understands very well that jamming an ally in public is not going to get the results that you want,” said Ambassador Martin Indyk, the former Obama administration Mideast peace envoy who is now a distinguished fellow at the Council on Foreign Relations.

“He’s engaging in very deft diplomacy in which first of all he makes clear that he’s in Israel’s corner, he’s got Netanyahu’s back, Israel has a right to defend itself,” Indyk said. “He establishes his credentials as sympathetic to Israel and supportive of Israel and its right to defend itself so that when it comes time to turn to Netanyahu and say, you know, ‘It’s time to wrap it up,’ he has credibility. And when he does that, he’ll do it in private.”

How to strike the right tone has been subject of internal debate, people familiar with the matter said.

“There has been some jockeying up to this point between how firm Biden has wanted to be with Israel, versus what his (national security) team has wanted, which is to go further,” said a former national security official familiar with the deliberations.

The official pointed to a call earlier in the renewed conflict between national security adviser Jake Sullivan and his Israeli counterpart Meir Ben-Shabbat, in which Sullivan “reiterated the United States’ serious concerns about the potential evictions of Palestinian families.” The call provoked a minor diplomatic dust-up, with Israel subsequently urging the US to stay out of the conflict in Jerusalem.

After, the call readouts turned more moderate in tone. Even as Biden and administration officials have lately become tougher in their private calls, the White House has suggested that making those entreaties publicly would not be constructive.

“The best way to end an international conflict is typically not to debate it in public,” press secretary Jen Psaki told reporters aboard Air Force One on Tuesday.

A decades-old relationship under the microscope

For Biden, the current Middle East crisis is the latest and most consequential chapter in a long relationship with a leader he first met during their days as young, ascendent politicians. They first met when Netanyahu was posted at the Israeli embassy in Washington. In the subsequent decades, as Biden rose to become chairman of the Senate Foreign Relations Committee, Netanyahu made a habit of calling him at his home to discuss foreign policy, a person familiar with the call said.

Even after the settlement debacle, the two men eventually reconciled.

“Bibi, I don’t agree with a damn thing you say,” Biden once claimed to have told Netanyahu, “but I love you.”

The quip, which Biden made during remarks to a group of Jewish Americans in 2014, neatly summed up his relationship with a leader whose actions during the Obama administration caused barely veiled contempt from American officials. Aside from the settlement episode in 2010 — which prompted a furious Biden, hours after dining with Netanyahu and his wife, to issue a statement condemning “the substance and timing of the announcement” — Netanyahu enraged Obama administration officials with his attempts to scuttle talks with Iran over its nuclear program, including during an address to Congress in 2015 that neither Republican leaders who invited Netanyahu nor the Israelis ran past the White House.

“Biden’s views began to change,” Miller said, after the embarrassment of the 2010 settlement episode followed by Netanyahu’s speech to Congress in 2015.

By the end of the administration, relations between Obama and Netanyahu had badly deteriorated. But Biden, who has long placed a premium on cultivating personal relationships even with leaders he disagrees with, made efforts to avoid completely freezing out the Israeli leader.

In 2010, when Netanyahu visited Washington a few weeks after the settlement dispute, Biden hosted him for a meal at the Naval Observatory ahead of an Oval Office meeting with Obama. Biden’s office described their dinnertime conversation as “candid.”

It was a notable sentiment given the warmer and more personal relationship he’d developed with Trump, whose approach to the longstanding Middle East conflict heavily favored Israel. Trump’s son-in-law Jared Kushner had known the Prime Minister for so long that years before Trump took office, when Netanyahu visited his family’s home in New Jersey, Kushner moved to the basement so Netanyahu could sleep in his bedroom.

A change in priorities

With Trump out of office, Netanyahu no longer has the President’s son-in-law as a dependable advocate in the West Wing. Biden has also sought to adopt a more neutral stance, even as he comes under fire from fellow Democrats for not speaking out more forcefully against Israel’s actions.

Unlike Trump — who named an ambassador to Israel before taking office — or Obama — who appointed a special envoy to the region his second day as president — Biden has not assigned a top-level appointee to lead peace efforts. Instead, he has dispatched deputy assistant secretary Hady Amr — an experienced diplomat — to the region for talks with Israeli and Palestinian officials.

Biden is expected to name an ambassador to Israel in the next two weeks, according to White House officials. But restarting a peace process has not been high on his list of foreign policy priorities. One US official earlier this year described the Middle East as “not in the top three” of Biden’s foreign policy priorities, listing the Asia-Pacific region, Europe and the Western Hemisphere as his more immediate concerns.

In what was perhaps a reflection of those priorities, it took Biden weeks to place a phone call to Netanyahu after taking office, a delay that forced the White House to deny it was intentionally snubbing Israel. Afterward, Biden said it was a “good conversation.”

Navigating the current violence has forced the two men into more regular communication. Biden, who has long voiced a deep and emotional admiration for Israel, is being challenged by members of his own party to take a harder line against the treatment of Palestinians.

At the same time, he appears aware of the limits to his influence, avoiding a decisive call for an end to the violence when it does not appear either side is ready to stand down.

“Everybody’s pressing Biden to do something. But doing something that’s not going to be effective doesn’t help either,” said former Deputy Secretary of State James Steinberg, who served at the State Department during the Obama administration.

As for his relationship with Netanyahu, Biden is likely to forge ahead with the same strategy he’s used on foreign leaders for most of his career.

“We’ve been personal friends for almost three decades. Can you believe it has been that long?” Netanyahu told him as they appeared together early in Obama’s term.

“You’re getting older, Bibi, I don’t know how,” Biden joked.

“But you,” Netanyahu responded, “remain younger all the time.”

CNN’s Phil Mattingly and John Harwood contributed to this report.