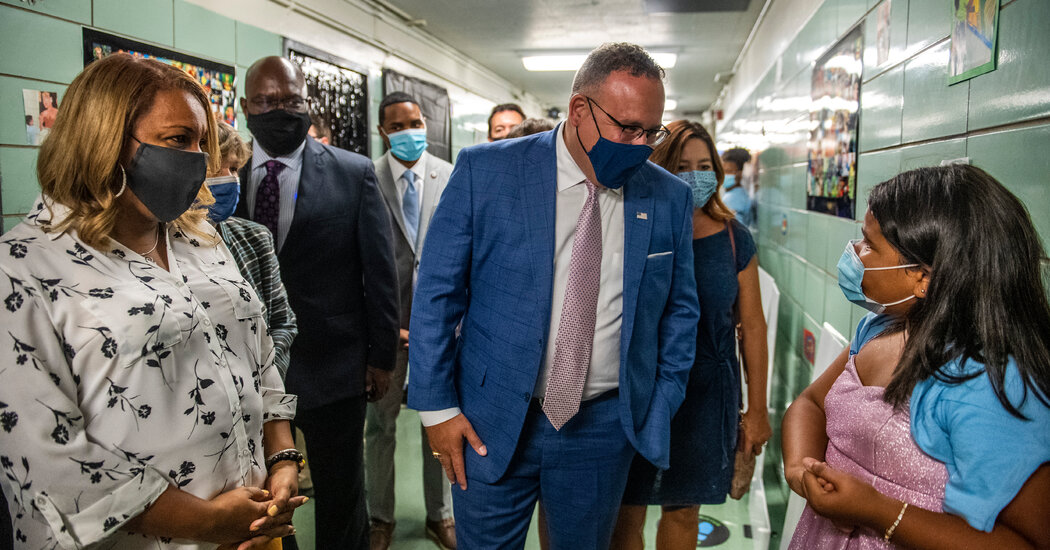 “The fact that they’re not adjusting based on the illness, and the outcry from medical experts, is astonishing,” Dr. Cardona said. “But we cannot sit around. We have to do everything in our power, including civil rights investigations and even referring matters to the Department of Justice for enforcement if necessary.”

He said he has also communicated by phone with education leaders in Texas and Florida. In the conversations, he said, “we agree on vaccinations, we disagree on the use of mitigation strategies to keep students safe.”

So far, the federal threats have fallen on deaf ears in states where the partisan war over masks continues to rage. On Tuesday, the governor-appointed school board in Florida doubled down. In a board meeting, the board voted to investigate penalties against district officials in two counties — Broward County and Alachua County — that defied their orders.

The federal intervention comes as school districts face a monumental task of trying to get students back to in-person learning and reverse the devastating setbacks experienced by a range of students.

A report released by the department’s civil rights office this summer provided a snapshot of the suffering experienced in the year since schools abruptly shut down in March 2020.

The report noted that the pre-pandemic barriers experienced by groups such as English Language Learners, students of color and low-income students, who struggled to access virtual learning, were exacerbated. Mental health challenges were experienced by all students, the report noted, particularly among lesbian, gay, bisexual, transgender and queer students in elementary and secondary schools. In general, students failing grades had soared and engagement had plummeted. The report noted that the pandemic challenges were particularly acute for students with disabilities whose educational success particularly relies on classroom time and hands-on services.

Suzanne B. Goldberg, the acting assistant secretary of the Office for Civil Rights, warned in the June report that the challenges students faced could run afoul of civil rights laws

“Although this report provides a data-driven account of Covid-19’s disparate impacts on students, rather than a legal analysis, it is important to recognize that disparities can sometimes be evidence of legal injuries under federal civil rights laws, even when policies and practices do not directly single out a group of people for harm,” she wrote.